As mention in the previous post, Van’s instructs the builder to remove 1/8" of the foam material from the top edge of the canopy frame arms. To facilitate the removal of the foam and epoxy mixture, a Dremel outfitted with a sanding drum was used. The epoxy/flox mixture is really tough on the sanding drums ... it took four or five to get the job done. 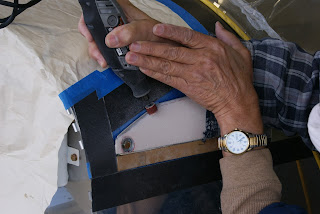 Using the Dremel outfitted with a sanding drum to remove 1/8" of the foam from the top edge of the canopy frame’s arm. 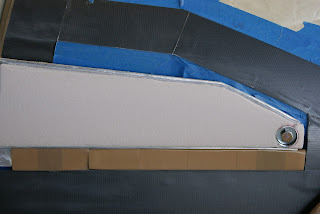 Finished removal of the foam from the canopy arm on the right side of the canopy frame.

The finishing kit comes with a large drawing that has the templates for cutting the fiberglass cloth and masking the canopy. I just could not bring myself to cut up the drawing so decided to procure a roll of tracing paper to create templates. This turned out to be quite time consuming and frankly, stupid on my part. Hindsight being 20/20, it would have been much easier to just order a second printed page to chop up. 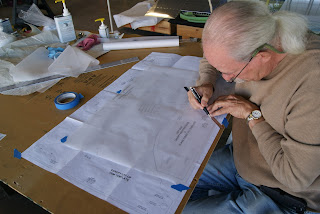 Using tracing paper to trace the shape of the templates so they can be cut to shape and placed onto the fuselage to establish the masking line for the canopy without destroying the original drawing sheet. This was a total waste of time .... should have just ordered another drawing to chop up.

After wasting a lot of time tracing and cutting out the templates, they were taped in place on the fuselage. It quickly defines where the lay-up will reside so there is no guess work from this point on. 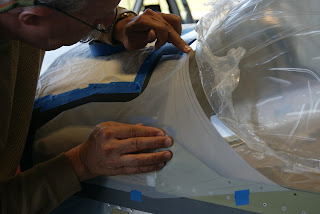 Placing the template for the left side into position.

Van’s instructs the builder to use a good quality electrical tape to create the masking line for the lay-up. The templates only cover the sides of the canopy and the builder is to visually “continue the line” from one side to another. 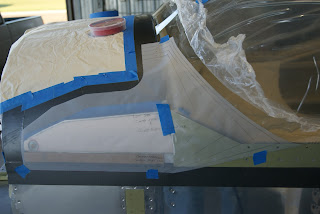 Red electrical tape was chosen over black because the epoxy for the first lay-up will be died black to hopefully give a good look from the inside of the cockpit … using a color other than black will make it much easier to visually align the first layer of the lay-up to the edge of the electrical tape.   I found "continuning the line" is not to be that easy and ended up with the tape having an uneven wavering curve. As can be seen (possibly) in the photo below … I even tried to use pieces of tape as guides but did not like end result. So a redo is in order. 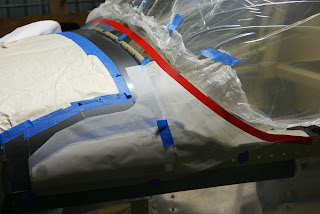 The red electrical tape will define the aft edge of the fairing lay-up onto the canopy.

Think I will try using a long thin strip of tracing paper to complete “the line” from one side to the other and then place the electrical tape adjacent to the tracing paper. Hopefully, this will yield a smoother looking transition.
Posted by John at 6:55 AM