Prior to clearing off the workspaces and moving on to the fiberglass work for the canopy fairing, decided to smooth the edges of the polycarbonate rear window before stowing it away in the crate. As with the plexiglass canopy, the edges of the rear window were sanded down to a smooth edge by sanding with progressively finer grits. This required quite a bit of sanding … as the polycarbonate seems to be tougher to sand than the plexiglass canopy. 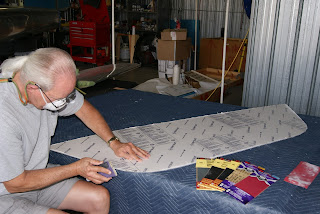 Beginning with 80 grit sandpaper, the edges of the rear window were quite smooth by the time 1000 grit paper was used.

Another task which I wanted to get out of the way was to prepare the rudder and vertical stabilizer fairings for the instillation of a metal backing strip which will be installed with epoxy fiberglass resin. The reason for this is because the flush rivets being used on the DOG Aviation RV-12 project will require the edges of the fiberglass to be countersunk. As such, I’m concerned that without the thin metal strips, the rivets will break down the now thin fiberglass as the rivet sets. Bonding thin strips of aluminum onto the inside edge of the fiberglass will allow the rivets to set on the metal and not allow them to pull through the thin fiberglass resulting from the machine countersinking. Metal strips were cut for bonding onto the fiberglass fairings. The plan is to bond the metal strips onto he fairings prior to drilling the holes into the fairings and machine countersinking them. 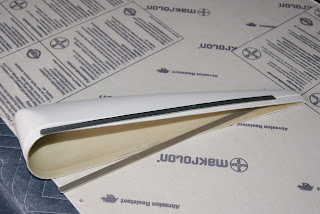 The metal strips will be bonded on the inside edge of the fairings then drilled so the rivet holes in the fairings can be machine countersunk for flush rivets without creating weakness in the fiberglass.

The DOG Aviation mail department has been receiving tips from fellow builders regarding the lay-up for the fiberglass canopy fairing. One tip received suggested removing the gas struts prior to doing the lay-up. I had been on the fence about this … but decided ultimately it was a good idea. Some have reported having a hard time opening the canopy so thought if necessary, it would be easy to remove the pivot bolts so the canopy can be lifted off the airplane. 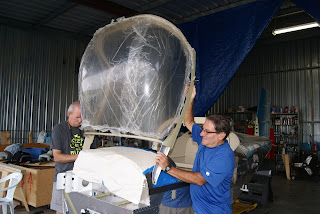 Kurt from lending a hand holding the canopy as I remove the second gas strut in preparation for the fiberglass lay-up.

Preparations for the lay up involve bonding foam blocks onto the forward arms of the canopy frame. The blocks require trimming prior to instillation to conform to the shape of the canopy frame’s forward arms. After the foam blocks were trimmed to shape, I decided to make a small modification and add a metal tube to where the hole will be for the pivot bolt access. The tube will be bonded in place along with the fiberglass and provide a smooth tunnel for access to the pivot bolt and washer. Suggest using thin wall aluminum tubing so it can be shaped easily with a Dremel tool. Much of the foam block seen in the photo bellow will ultimately be removed during the shaping process. 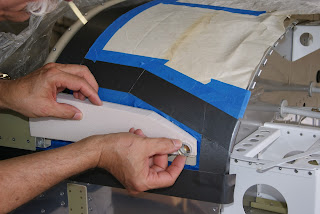 Inserting the aluminum tubing being used to make a smooth tunnel for pivot bolt access.

The goodies for the lay-up consists of West Systems 105 epoxy resin and two hardeners … 205 fast hardener and 206 slow hardener. Although only slow hardener is required, fast hardener was also purchased and used to bond the foam blocks onto the canopy frame arms. It will also be used to bond the metal strips onto the previously mentioned fairings. In addition to the epoxy, flocked cotton fiber was purchased for use as an additive for structural bonding and glass bubbles to be used to create lightweight, easy sanding filler. A pump kit was also purchased which will pump out metered amounts resin and hardener. 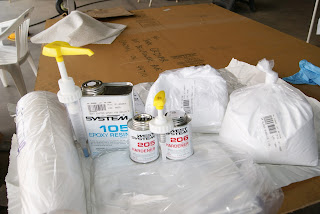 A mixture of fast setting epoxy resin and cotton fiber the consistency of peanut butter was slathered onto the back of the foam blocks and they were pressed onto the forward canopy frame arms. During the next work session, after the epoxy has fully set, the foam blocks will be contoured prior to making the lay-up … this process will remove a large majority of the foam blocks. 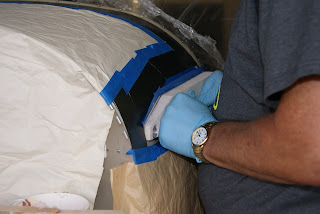 Pressing a foam block onto the forward arm of the canopy frame. The foam block was slathered with a mixture of fast setting epoxy and cotton fiber.

Unfortunately, work will have to halt here for the rest of the week due to the loss of a close friend the next post will be dedicated to. Kurt flew out from and together we will be heading to for the services.
Posted by John at 9:12 PM