The first order of business this afternoon was to remove the wavering red tape and try to make it look more even and symmetrical. The first thing that was tried was to make a long thin strip of paper to extend “the line” from the left side template to the right side. On the surface this would seem like a good idea … but in practice the strip wanted to slide down the curve of the canopy almost to the rivets.  Decided to take another tact and made the strip as wide as the end of the template which if memory serves me, was 2 28/32". This worked great and yielded a nice edge to place the red electrical tape alongside. 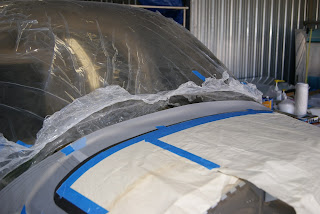 A strip of tracing paper 2 28/32" wide was taped down between the left and right templates to establish “the line” between the two templates.

A layer of red electrical tape was placed adjacent to the two templates following “the line” defined by the strip of tracing paper used to bridge the gap between the left and right templates.  While the templates were in place, marks were made on the canopy skirts to define the area that will need to be scuffed up so the epoxy can get a good grip. Fellow builders may have noticed the canopy skirts have been primed. This was a mistake made last year when the parts were sanded for interior paint … accidentally sanded both sides so decided it best at that time to prime both sides to avoid corrosion. 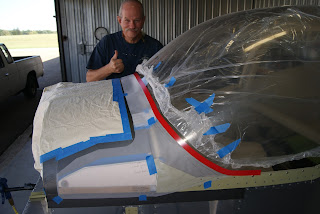 The red electrical tape is now on the canopy and looks much straighter than it did yesterday.

Moving on, it is time to make everything that is shiny that will come into contact with the epoxy very dull. This requires quite a bit of sanding and re-sanding. The canopy forward of the red electrical tape was sanded with 80 grit sandpaper until there was no gloss anywhere. Unfortunately, the canopy skirts were primed with Akzo, which is not easy to get off, so that took a little work and some power tools to speed things up. 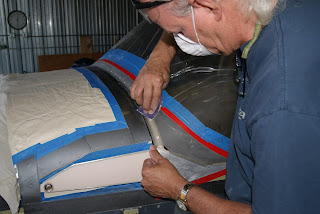 Finishing up on the hand sanding of the canopy with 80 grit sandpaper so the epoxy can get a good grip.

There is a little more masking necessary, but all the prep work for the fiberglass lay-up is  basically done now.
Posted by John at 10:04 PM