Ready For Making The Canopy Fairing

The fiberglass canopy lay-up was scheduled for today, but friend Bernie needed some muscle to help him with a project … so needing to have plenty of time, the lay-up will begin tomorrow. Fortunately I remembered wanting to place some tape on the inside of the canopy arms to protect them just in case some epoxy resin runs down the inside of the arms. Because the gas struts have been removed, Bernie held the canopy open while I placed masking tape onto the inner surfaces of the canopy frame.

Prior to applying the canopy lay-up, the plans call for using packaging tape to cover the previously applied duct tape. Just prior to doing the lay-up, the packaging tape is to be covered with a mold release agent or wax so the lay-up will not stick to the upper fuselage skin or the sides of the fuselage … (think I will use a very thin film of Vaseline for this task). While Bernie was holding the canopy open, also placed some packaging tape over the edge that makes up the upper fuselage skin and the instrument panel. 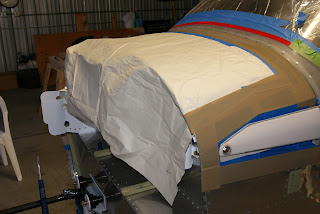 Prior to beginning the lay-up, the previously installed duct tape is to be covered with packaging tape. This slick tape will become slathered with a mold release agent.

In addition to the two layers of red electrical tape on the canopy, one of the tips suggested for doing the lay-up is to place an additional layer of masking tape over the red tape. This tape will be pealed away immediately after the last layer of the lay-up is in place and before the epoxy resin sets. The purpose for this is to keep the red tape clean so precise sanding can take place without dealing with dried blobs of resin on the electrical tape. 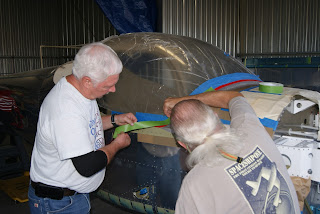 Bernie holding the strip of masking tape while I carefully place it over the red electrical tape.
The canopy fairing lay-up is to be performed as a two phase process. During the first phase, the lay-ups for both the left and right canopy arms are completed and allowed to harden overnight. Phase two will create a bridge to fill the gap between the two cured lay-ups.
Posted by John at 9:36 PM