With the help of Bernie and Mike (many thanks guys), phase one of the canopy lay-up was completed yesterday … there were a couple of hiccups during the heat of battle (most all self imposed) which I’ll get to later. But all and all it turned out OK.

One of the things I was going to do but forgot to do in advance, was to make plugs for the gap between the canopy arm and the upper fuselage skin. Because of time constraints, and the schedules of others, did not do it before the lay-up process began and as a result, there is a low area in the lay-up that will need to be filled. No big deal just extra work that may have been avoided.

The plywood top of the finishing crate was used for the work surface for cutting the glass cloth. The top for this crate has a paper coating on it and it works well with the rotary cutter to be mentioned later. To prepare the lid for the job, the 2x4 stiffeners were removed along with the staples … packaging tape was placed over the rough spots on the plywood where the row of staples were. I also used tape to cover the edges of the plywood so the glass cloth would not snag on the edges of the plywood. This can be seen in some of the photos below.

Preparing the fiberglass cloth prior to cutting takes a few minutes because the cloth needs to be straightened out so the fiber weaves run as straight as possible from side to side and up and down. Then ready to cut the fabric, I would suggest not even considering the use of scissors, you WILL want to use a rotary cutting wheel for this task so the cloth can be cut while it is on a flat surface. Just picking the cloth up to get scissors under it will distort the weave and the shape. Another tip is to use a sharpie marking pen or ball point pen to gently trace the shape of the pattern onto the glass cloth. Yes, the sharpie will suck into the fiber and make wide lines but if you move the pen quickly that can be mitigated. I used both a fine point sharpie and ball point pen … the ball point pen was harder to use to make marks, but the lines were thinner. 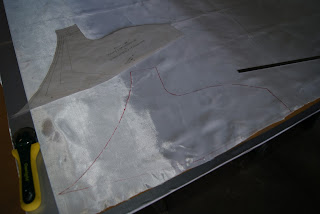 Glass fabric with the shape of the pattern traced onto it.

To cut the glass as mentioned, you WILL want to use a rotary cutter. It cuts the glass like a hot knife through butter without disturbing the weave. The cutter was not very expensive, think it cost around $16 at Wallmart aviation supply. 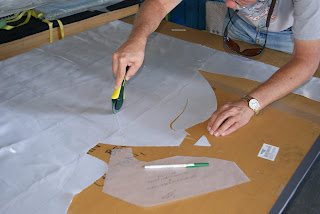 Using the rotary cutter to cut the pattern traced onto the glass cloth.

Based on a tip from John, a builder in , I added about 1/4" to the bottom edge of all the patterns. This will allow for plenty of extra material to form the bottom of the canopy skirt (this came in handy). After cutting a pattern piece it should be placed in a pile with the other pieces cut for that side. So two piles were made one for the left side and one for the right and paper was placed between each layer so the cloth could me moved around without picking it up and distorting the pattern or having the ends fray too much. When picking up the cut pieces if cloth, I placed a metal ruler under it and lifted so my fingers could get way under it. This keeps the shape of the glass in tact. If lifting from the edges, it can easily distort and fray. 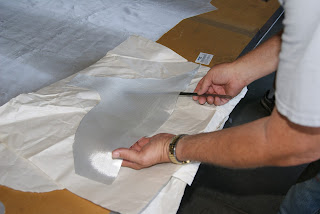 Moving the cut piece of glass cloth using a metal ruler to get way under the piece to give it lots of support.

Prior to beginning the lay-up on the canopy arms, Vaseline was carefully slathered onto areas of the packaging tape where the lay-up will cover. This was used in lieu of mold release or car wax. 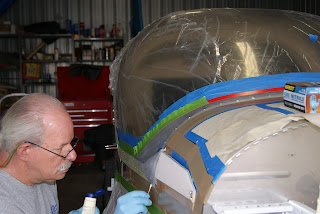 Slathering Vaseline onto tight areas of the packaging tape using a cotton swab. 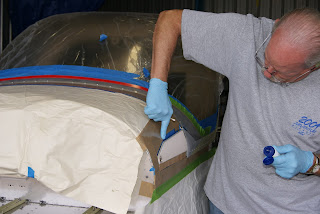 Rubbing a thin film of Vaseline onto the packaging tape.

A mixture of flox was mixed per the plans and used to fill the upper areas on the canopy frame arms that were cut out to 1/8". Next the areas receiving the lay-up are to be wetted with the resin. I decided to tint the resin for this and the first layer black so it will hopefully have a nicer look from inside the cockpit.

Here is where I made two out of three back to back to back errors which got the lay-up off to a rocky start. First error – I had been using fast drying hardener for the previous flox mixtures and forgot to change over to the slow hardener. So the painted on epoxy began to set too quickly. Second error, not a biggie just annoying, is I wanted to mask off the area of the canopy that will become the bridge and didn’t … so it was inadvertently slathered with the epoxy mixture and will now require lots of sanding to roughen it up again. 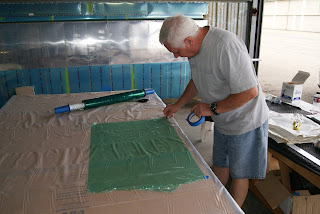 Bernie placing the plastic film on the table that will be used to transfer the wetted out lay-up to the canopy arms. 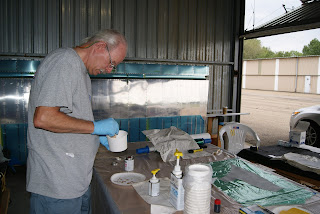 Mixing up a batch of epoxy (this time with the slow hardener) that will be tinted black for the first layer of glass fabric.

When wetting out the fabric a stippling action is preferable to work the epoxy deep into the fibers as opposed to painting the epoxy on. Taking a brush and cutting the bristles shorter makes for a good stippling brush. Also body filler squeegees help to spread the epoxy mixture evenly once the cloth is wetted. 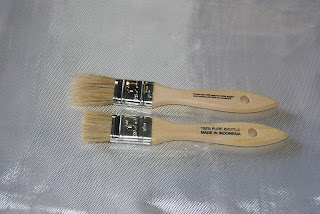 A cut brush works better for stippling the epoxy resin into the fabric than brushing.

The third error I made was not flipping the first lay-up layer upside down onto the plastic film. So after it was already wetted out, that error was quickly realized and another sheet of plastic wrap was used to cover it. Of course, now the plastic wrap is sticking to the previous piece and it became a tough chore to separate them and peal back the film that was placed on the wrong side. This all took time I did not have because the fast hardener was beginning to kick off big time. 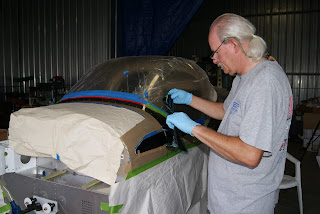 Moving the first layer of the left lay-up to the airplane with the plastic wrap ON TOP this time. 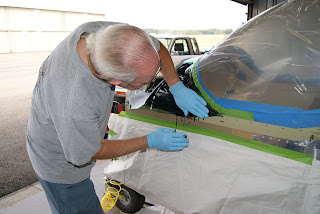 The positioning of the lay-up would have been much easer to adjust had the epoxy bellow it not been to kicking off and getting really tacky. 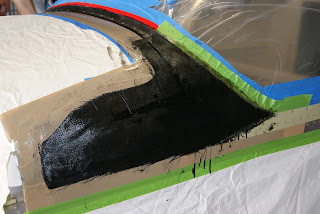 First lay-up in position on the left side ... time to quickly get to the right side for the fast hardner is getting really tacky.

Once the lay-up was in position, which turned out to be quite a chore, the plastic film was pealed off and final tweaking was done with fingers. 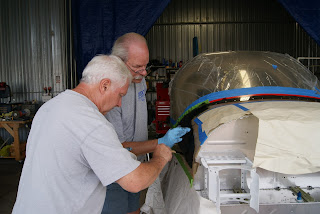 Adjusting the position of the right side’s first lay-up while Bernie stippled the air bubbles out of the fabric.

After the first layer of the five is in position, all subsequent layers are to be placed onto the first layer dry and wetted out in place. When working on Pete’s RV-9A we wetted out all the layers prior to moving them to the airplane and had great results. But I decided to wet out the layers per the instructions and applied all the subsequent layers dry and wetted them out in place. If I were to do it over, I think I would try to wet them out first. So for the bridge in phase two, I will wet out the pieces first and see how that compares. I think the big issue for me is when stippling the epoxy into the glass cloth, the area above the canopy arms got sunken and with the first layer being fast epoxy, it was not possible pull the material taught again. Had I made plugs for this area like I wanted to … but forgot, this would not have been an issue.

To add insult to injury, sometime during the second lay-up layer the pump exploded off the epoxy resin can while pumping … the spring came out, the pickup went inside the can, and the epoxy resin went everywhere. Of course, while trying to screw the pump back in place, even more resin poured out everywhere. Not sure what caused this so I tightened the threads tightly by hand and it happened a second time. This time I just made the threads snug and slowly pressed down on the pump. Seemed to work OK for the rest of the session. That was a pain in the butt and not being in a good mood from the other faux pas, this event it really set me off. 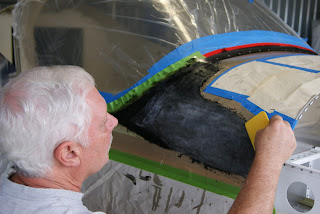 Bernie spreading out the fourth layer  with a squeegee … getting it ready to wet out with epoxy resin.

After all five layers of the lay-up were in place, the entire lay-up was covered with peal-ply which is a Dacron fabric used to adorb excess resin and create texture for the epoxy to adhere to if additional layers are to be applied later ... as in the overpaps from the bridge lay-up in phase two. Sadly, we were all in a hurry to leave at this point to head out for a get together later in the evening … so forgot to take a photo of the peal ply in place. Will need to try to remember that prior to continuing.

Many thanks to builders John in Virginia, Bob in and Nick in for their good suggestions.
Posted by John at 9:10 AM