As frequent readers of the DOG Aviation Blog know, rarely is there personal content within the Blog, but the recent passing of a long time friend warrants deviation. DOG Aviation morns the loss of longtime friend Marty Dippel. 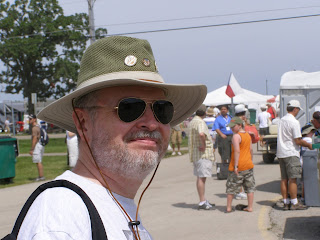 
I met Marty in 1970 through a mutual friend while attending a well known electronics school in . Marty married his loving wife Kathie and remained in . Although I moved away from , we keep in touch over the years. During the mid 80’s, we began to share our mutual aviation interest … and attended the EAA air show at . This began, what turned out to be, a much looked forward to annual pilgrimage to to attend AirVenture.
For many years Marty was my travel companion.  Prior to being diagnosed with stage four cancer (shortly after our 2011 pilgrimage to AirVenture), we had only missed attending the show a couple of times since the mid 80’s. 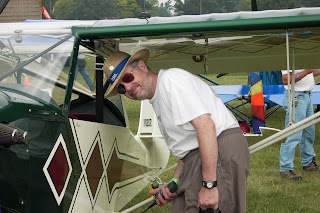 Marty admiring the wonderful crafstsmanship that went into this bird. After the show, we discovered this Skyraider won the grand champion award.

Marty was raised on a farm in and had a “salt of the earth quality”. His Father was a pilot, which rubbed off on Marty. So many single words describe Marty, but I’ll begin with brilliant. Marty had a keen intellect which was exhibited by his ability to design savvy electronic circuitry and manage large networks of Unix computer systems. Although Marty was easy going and soft spoken, he was very articulate and spoke with a deep soothing voice that was unassuming, yet exuded wisdom. Marty was very well rounded and could discuss most anything … electronics, shop tools, farming, airplanes, philosophy, classical music or high energy particle physics. He was a kind, gentle, honest and caring man, with a wonderful sense of humor. Simply put, he was the nicest guy you would ever want to meet. 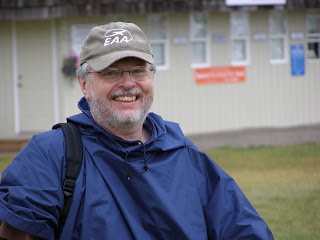 When at Oshkosh, even a rainy day couldn't keep the smile off Marty's face.

Marty looked forward to every new DOG Aviation Blog posting so he could closely follow the progress of the RV-12 project and as he so eloquently said, “live vicariously through me”. I was ever so hopeful Marty would be able to contribute to the building of the DOG Aviation RV-12 … setting a rivet, drilling a hole … anything. Sadly, that was not to be because travel quickly became difficult, then unfeasible and lastly impossible. 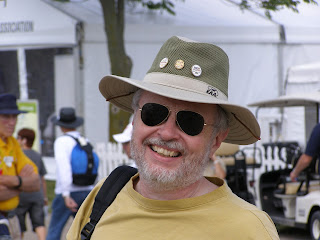