Considering the major screw up of using quick setting hardener on the first layer, all and all the lay-up on the canopy frame arms turned out OK. There is definitely a pronounced valley on both sides where the gap is between the upper fuselage skin and the canopy frame’s arm. As mentioned in the previous post, this could have been totally eliminated if I had remembered to make plugs for this area, but I didn’t want to keep my helpers waiting around so it is what it is. I still feel, had the cloth been put in place wetted out, the sag could have been controlled much better. Still, making plugs for this area IS the way to go. However, the bigger issue for me was the mistake of using the quick setting hardener on the first layer … which made sliding the cloth back to shape using finger pressure an impossibility.  Below is a photo of the peal-ply on the canopy arm and the valley can be seen as a white area. 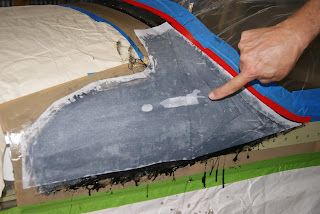 Peal-ply on the left canopy arm lay-up … the white area I’m pointing to is where the glass cloth sunk into the gap between the upper fuselage skin and the canopy frame arm during the wetting out and stippling process.

Below is a photo of the lay-up with the peal-ply removed. Filler could be used in the low spot, but think putting another layer or two of glass in the valley to build it up is the way to go so the filler can be kept to thin amounts. 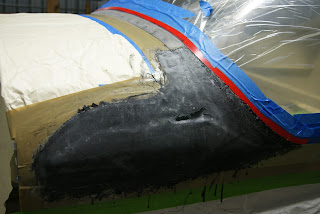 Cured lay-up on the left canopy frame arm after the peal-ply was removed.

Under normal circumstances, the canopy would be ready to continue with the lay-up for the bridge between the left and right lay-ups. However, because of my screw-up yesterday of coating the canopy with resin in this area, a lot of otherwise unnecessary sanding was required to scuff up the canopy again.   Of course, this created a bunch of sanding debris which got all over the Vaseline on the upper fuselage skin … so that needed to be removed as well. Now the canopy is prepped and ready to go. 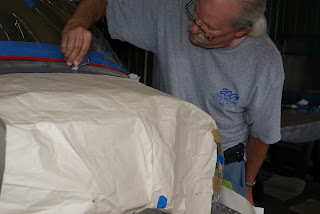 Sanding away one of the mistakes made the previous day. Nothing like creating extra work for yourself.

Bernie came by to lend a hand with cutting the fiberglass strips. The cloth was carefully spread out on the cutting surface and using a long thick metal ruler it was marked for cuts using a fine tipped sharpie. The plans call for making ten 36" long strips in varying widths ranging from 2 3/4" to 1/4". 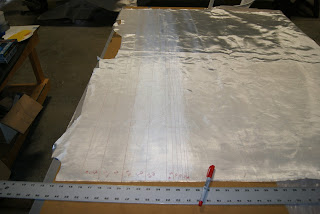 Glass cloth marked for the 36" strips needed to create the bridge between the two sides.

The original plan was to mark all the cuts, then use the rotary cutter to make the cuts freehand. But then we decided it best to keep pressure on the cloth using the metal ruler and run the rotary cutter along the side of the ruler to make the cuts … the idea here was to keep the edges of the cloth from distorting. This may have taken a little extra time, but the results were nice straight strips of cloth. 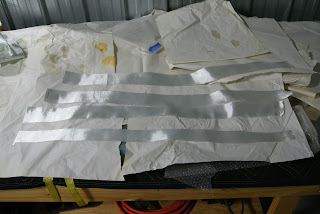 The wider strips of glass cloth cut and ready for the bridge lay-up. 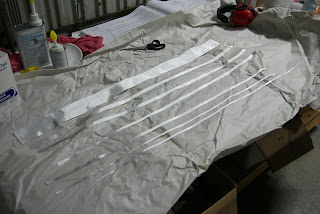 The thinner strips of glass cloth including the tricky 1/4" strip.

Will try to make the bridge lay-up later today or tomorrow depending on the availability of help.
Posted by John at 6:44 AM