It was a good day at the office - no surprises, no problems and no mistakes … and the resin pump even cooperated.  Bernie and Mike K. came by the hangar and pitched in with the canopy fairing bridge lay-up. The three of us made an assembly line to knock out laying up the remaining ten plies of glass cloth that will make up the bridge connecting the left and right canopy arm lay-ups. Thanks guys for all the help …. it is truly much appreciated. Mike T. also came by as well and helped take some of the photos of our work activities ... thanks Mike that was much appreciated because I did not want to get near the camera with epoxy resin on my fingers. 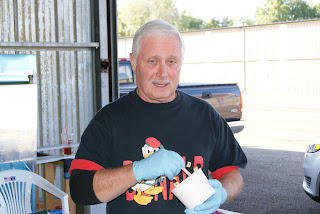 Bernie took on the roll of the “mixologist”. 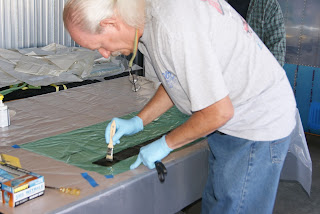 Stippling epoxy resin dyed black into the glass cloth for the first layer of the canopy bridge lay-up. 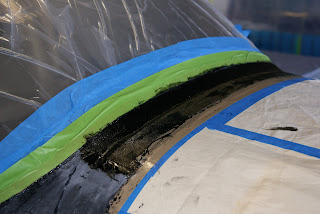 First layer of the canopy bridge lay-up in position, but prior to removing the sag between the upper fuselage skin and canopy.

This time we deviated from Van’s plans and DID NOT place the remaining layers on dry and then stipple resin into them. Instead, all the remaining layers were wetted out with resin while on plastic wrap, wiped with a squeegee to remove excess resin, plastic wrap trimmed, then the wet cloth/plastic wrap was transferred to the canopy, cloth carefully positioned and the plastic wrap removed. After removing the plastic wrap, the positioning of the layer of glass cloth was tweaked and then the air bubbles were gently stippled away with extra care not to stipple hard straight down into the area of the gap. The results were outstanding. 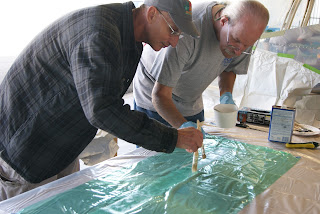 Mike and I wetting out the second layer of glass cloth … only eight more to go.

Van’s drawing showing the positioning of the ten layers leaves a bit to be desired … the lines are drawn so closely together it is very hard to identify the lines for each layer without either young eyes or a magnifying glass. Since we are all geezers, we chose the magnifying glass route. 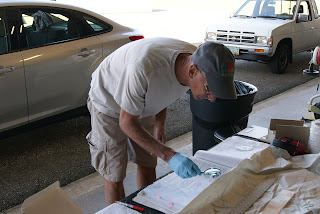 "Inspector" Mike using a magnifying glass to verifying the positioning for the next layer of glass cloth. 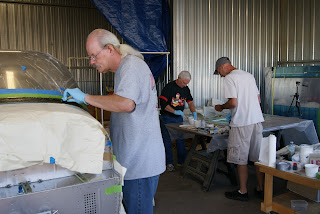 I’m adjusting the positioning of a layer of glass cloth as Bernie mixes up another batch of epoxy and Mike had just finished cleaning epoxy resin off the scissors.

By the time we got past the second layer, we had a good system going. While I was fine tuning and stippling air bubbles out of the current lay-up, Bernie mixed the next batch of epoxy resin and Mike set up a new piece of plastic film and placed the next glass cloth layer on the launching pad. For those builders curious about the amount of resin mixture used … approximately one pump of resin and hardener was enough to wet out each of the wider pieces of glass cloth and a few of the narrow pieces. 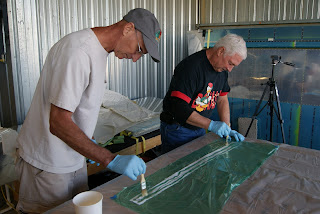 Bernie and Mike wetting out the tenth and final layer of glass cloth for the canopy bridge lay-up.

One of the down sides about using pallet wrap is ... not if, but when, it sticks to itself … it is really hard to separate it with gloves on. We were able to mitigate this mess by trimming the plastic wrap very close to the edge of the glass cloth. 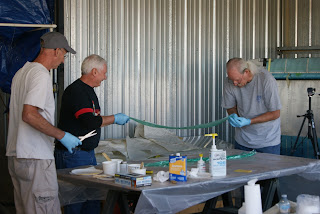 Remember what I mentioned about the plastic wrap clinging to itself? It is not so easy to get unstuck. 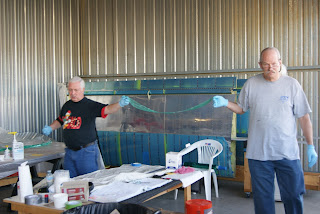 Nope – not a May Day parade … just Bernie and I  transferring the final lay-up to the canopy. 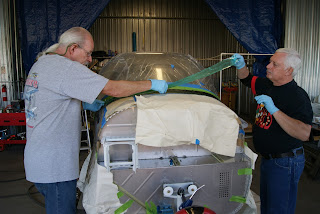 Bernie and I carefully placing the final lay-up onto the canopy. 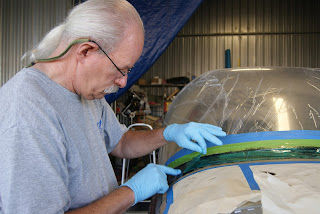 Pealing the plastic wrap away from the epoxy resin soaked glass cloth.

All the layers of glass cloth for the canopy bridge are cut to 36" and all need to be custom trimmed in place on the canopy. 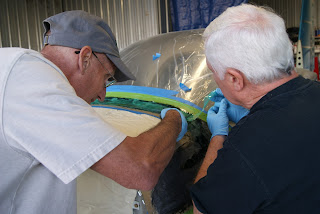 Mike cutting the final layer of the canopy bridge lay-up to length while Bernie holds the cloth off the surface of the canopy fairing. 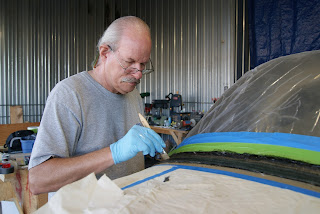 Putting the finishing touches on the final layer of the canopy bridge lay-up. 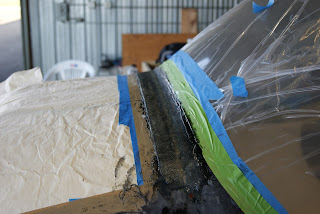 Completed canopy bridge lay-up before applying the peal-ply. All ten layers are in place. 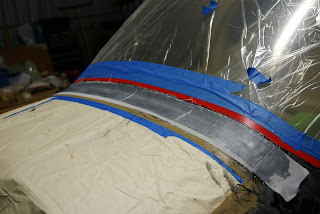 Finished lay-up with peal-ply in place.

The plans state the radius of the transition from the canopy to the upper fuselage skin is supposed to be approximately 2" … so a piece of PVC pipe was located that has a 2" diameter to use as a gauge. All and all, the lay-up seems to be in the ball park as can be seen in the photo below. 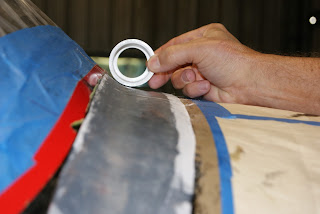 The transition is close to the 2" radius suggested by Van’s.

Also should mention some of the scraps were used to build up the depressions above the canopy arms … doing this will require less filler. Although the canopy lay-up is finished, there will be many hours of sanding and filling ahead. Oh joy!