Yesterday afternoon was hoping to peal off the first layer of red electrical tape and per the plans, roll the fuselage outside and carefully sand down even to the first layer of red tape with 150 grit sandpaper. The morning rains had passed, so after the first layer of electrical tape was carefully pealed off (with no issues), I began opening the hangar door. I ran into problems while opening the hangar door because the northerly winds had really kicked up and were coming straight in the hangar blowing everything light and lose all over the hangar. I decided it was just too windy to work on the fuselage outside, so aborted the effort. 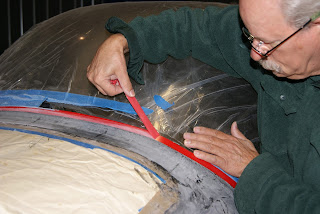 Pealing the second layer of red electrical tape off to get ready for the coating of resin that will be slathered over the entire lay-up.

Taking a pass on the sanding due to the stiff northerly winds, decided to move on and begin preparing the fuel tank components for assembly. During this work session the T-407 ring and T-01220A&B doublers were prepared. 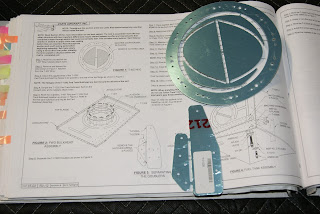 The T-407 ring requires some attention in that that there are twelve nutplates which require machine countersinking of all 24 associated rivet holes. The nutplates and ring will be riveted with AN426AD3-4 solid rivets, so the countersink cage was outfitted with a #40-100 degree countersink bit, Boelube located and the fun began. 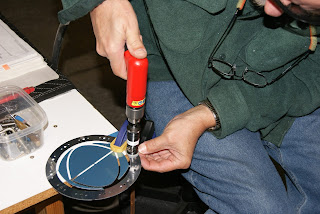 Machine countersinking one of the 24 rivet holes in the T-407 ring using a countersink cage outfitted with a #40-100 degree countersink bit.

The decision was made to countersink these rivet holes a couple of clicks deeper than flush … the reasoning behind this decision is the forward side of the fuel tank will be dimpled and I would prefer the dimples be fully seated in the countersinks with hopefully a little space left for a thin film of fuel tank sealant to cover the entire dimple in the countersink during assembly ... which will hopefully make for a good seal. 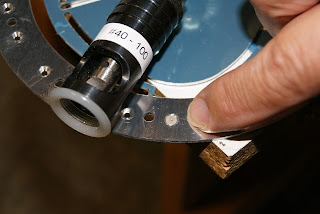 One can see the countersinks for the dimples were made just a couple of clicks deeper than flush so the dimples on the forward skin of the fuel tank can be completely seated and still have a little room for fuel tank sealant.

After the countersinking of all the rivet holes in the T-407 ring was completed, the center of the ring was removed using a fine toothed hack saw blade … followed by a little file work to remove the sharp edges. The ring was then smoothed up on a Scotch-Brite wheel and the inner edges sanded smooth by hand. Next the T-01220A&B doublers were separated on the band saw and edges smoothed on a Scotch-Brite wheel.

The winds have subsided, so hopefully I can get the fuselage rolled outside today and sand down to the first layer of tape and apply a slathering of resin over the lay-up and while it is drying, continue preparing fuel tank parts.
Posted by John at 8:20 AM