It was another cold, snowy, nasty day at DOG Aviation today and as the second burner on the heater was slowly beginning to take care of the deep chill in the air, I noticed a pile of snow in the fuselage.  There is a fairly large gap between the roll up door and the door frame which lets in a lot of air (reason for not being worried about the propane heater inside the shop) and lately there have been brutal cold winds and snow. The snow was blowing into the shop and piling up inside the fuselage. Unfortunately, I cleaned it up before having the presence of mind to take a photo. Decided to tape some of Van’s packing paper over the gap, so now any snow that blows in will pile up on the floor.

The initial plan for today’s work session was to remove the F-1270 skins and begin machine countersinking the freshly drilled longerons. However, there are nutplates and the air vent assemblies to install onto the F-1270 skins, plus the aft tab on the skins required being removed. All that got me thinking of the logistics of doing those tasks in a shop that has long since run out of open horizontal space. I decided it would be best to try to accomplish those tasks while the F-1270 side skins are still attached to the fuselage assembly. 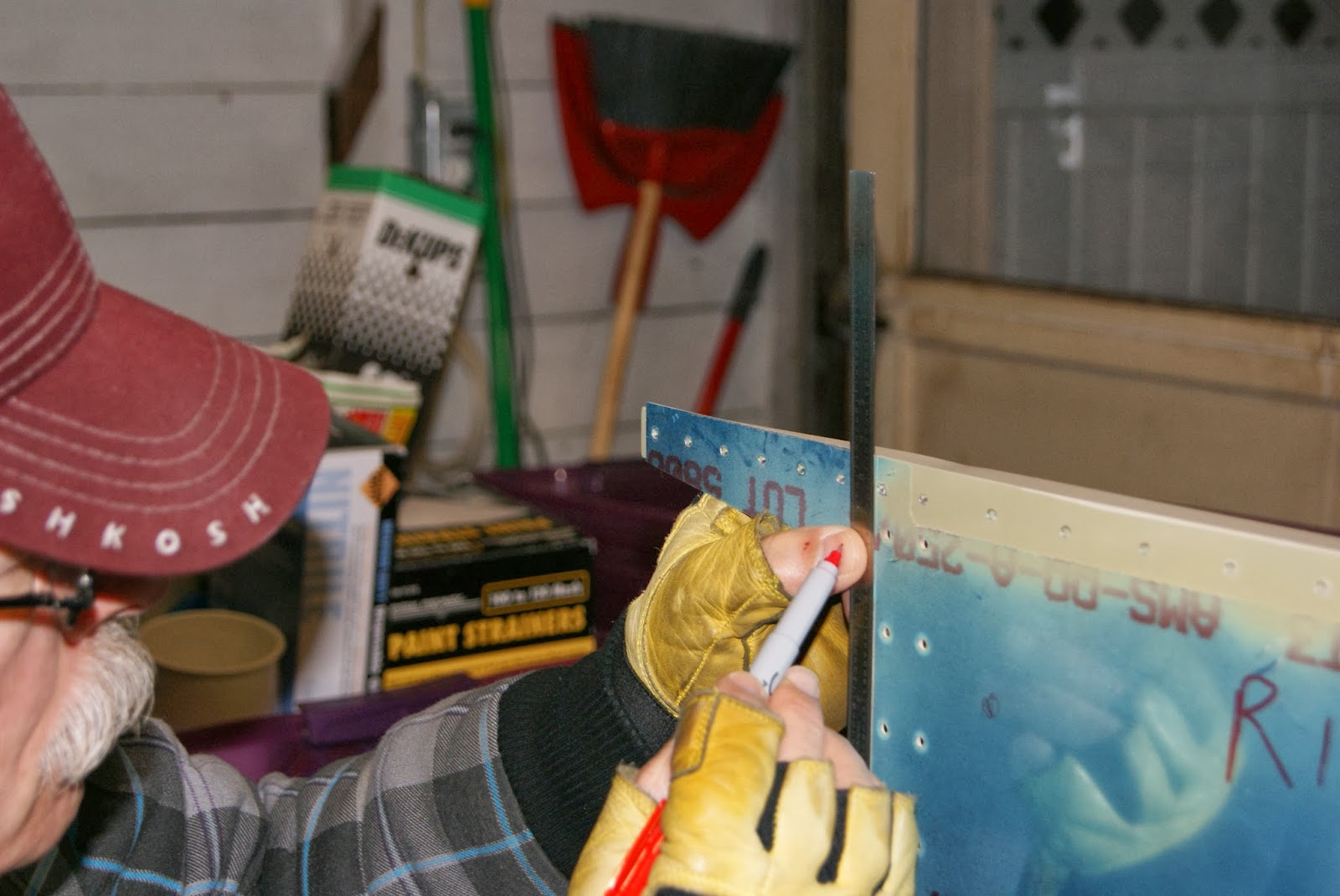 Marking the aft tab on the F-1270-R fuselage side skin for removal. 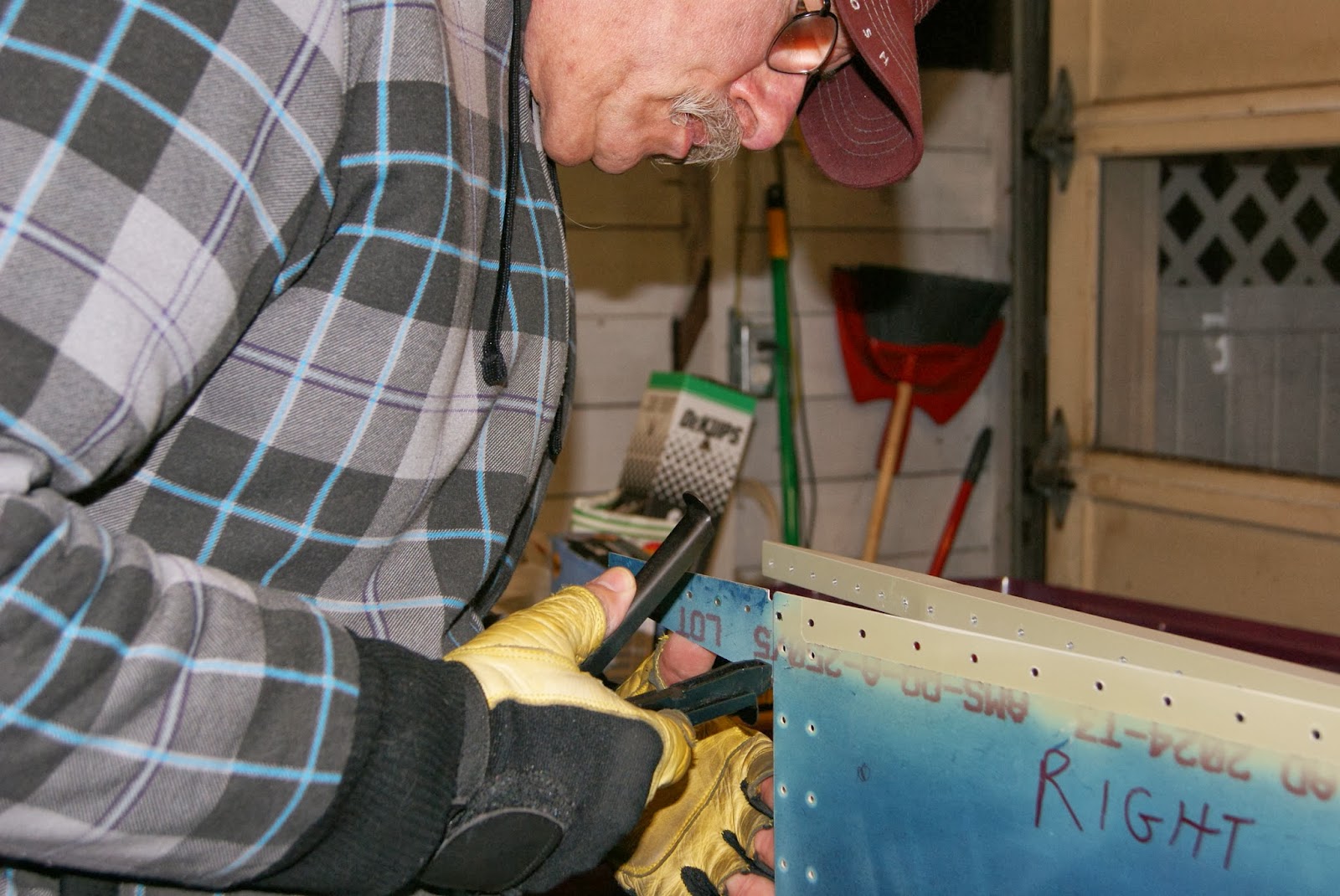 Using the nibbling tool to remove the aft tab from the F-1270-R fuselage side skin. 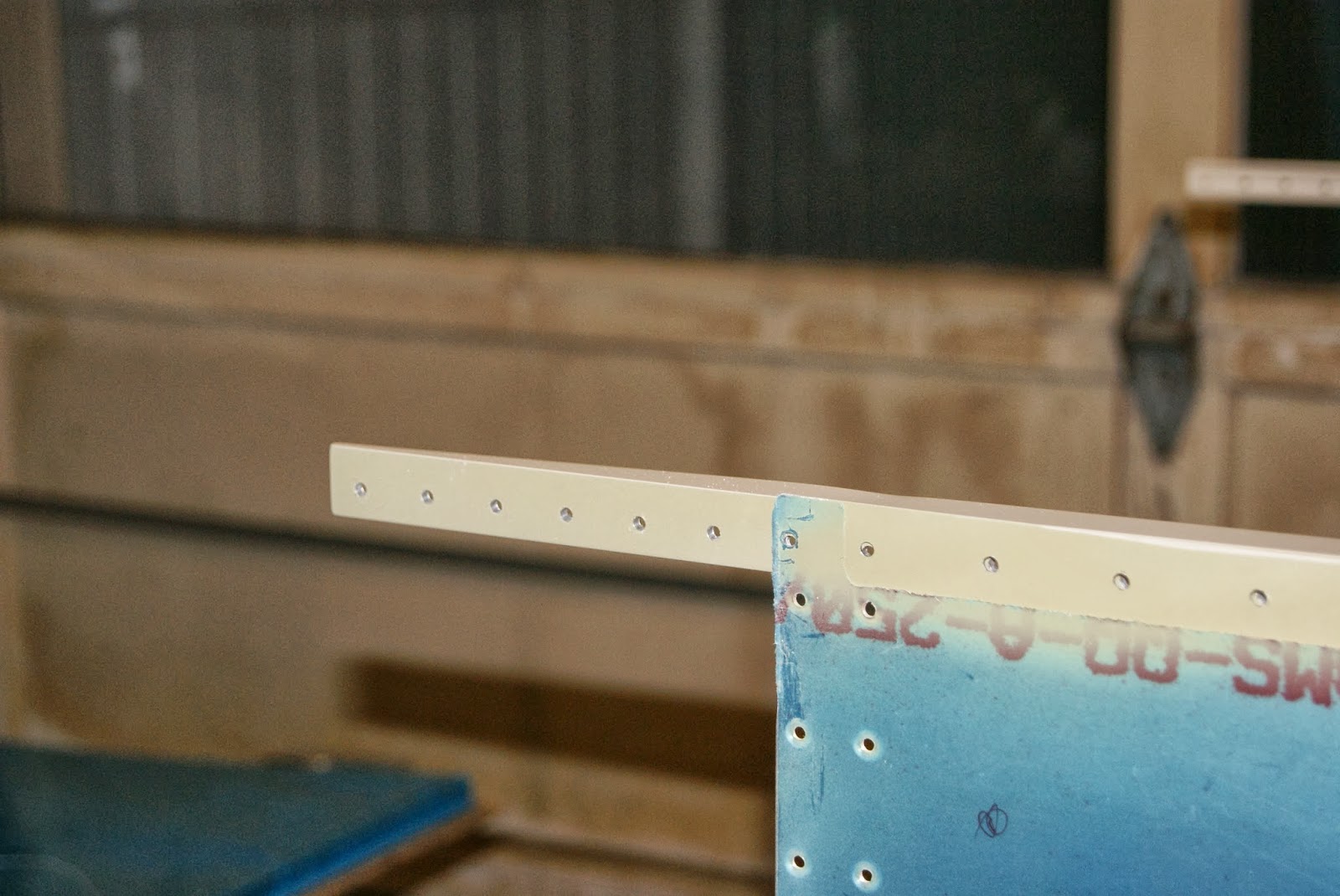 F-1270-R skin after removing the aft tab and filing the edge of the skin smooth. 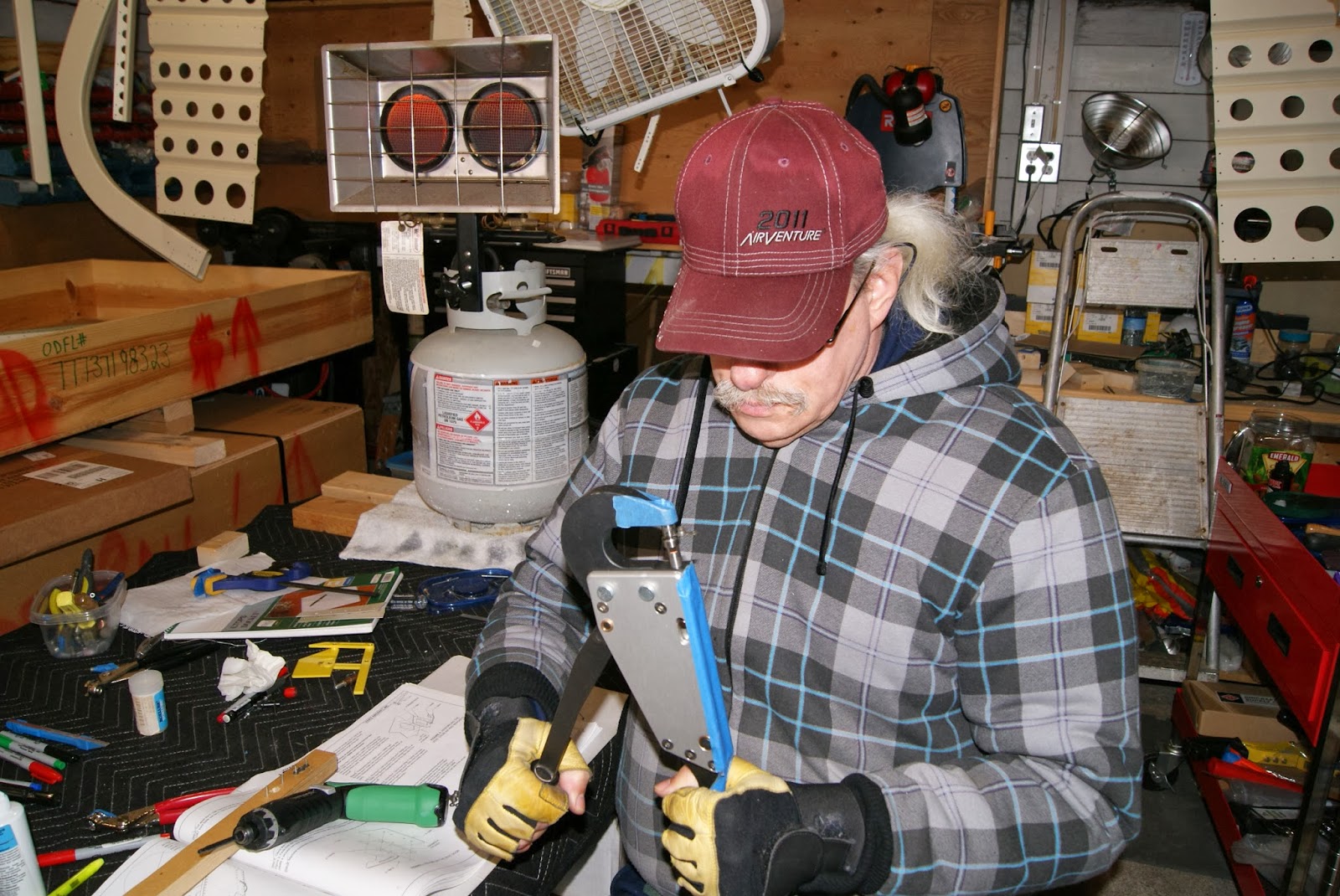 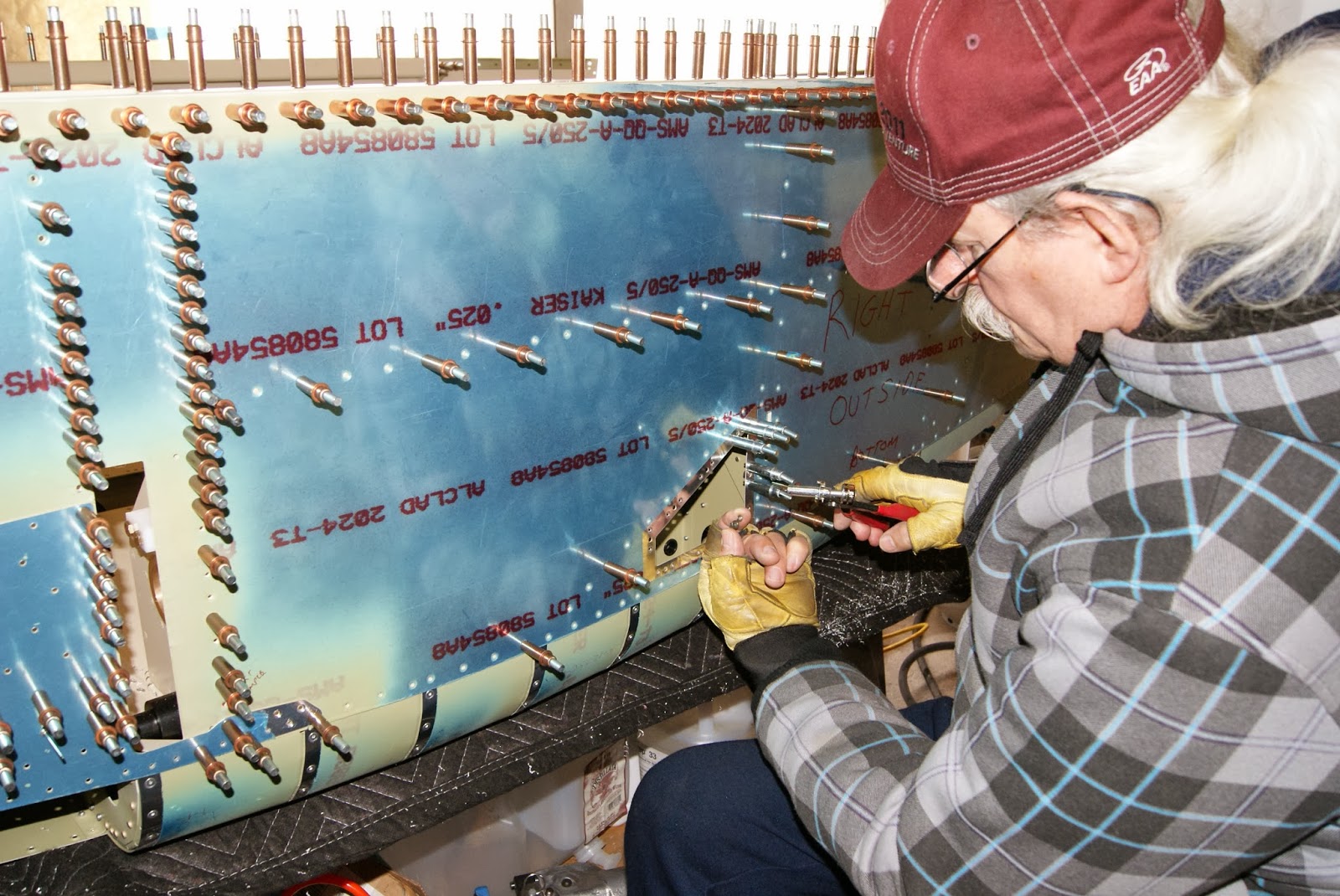 Placing the nutplates onto the F-1270-R side skin and using Clecos to hold them in position for riveting. 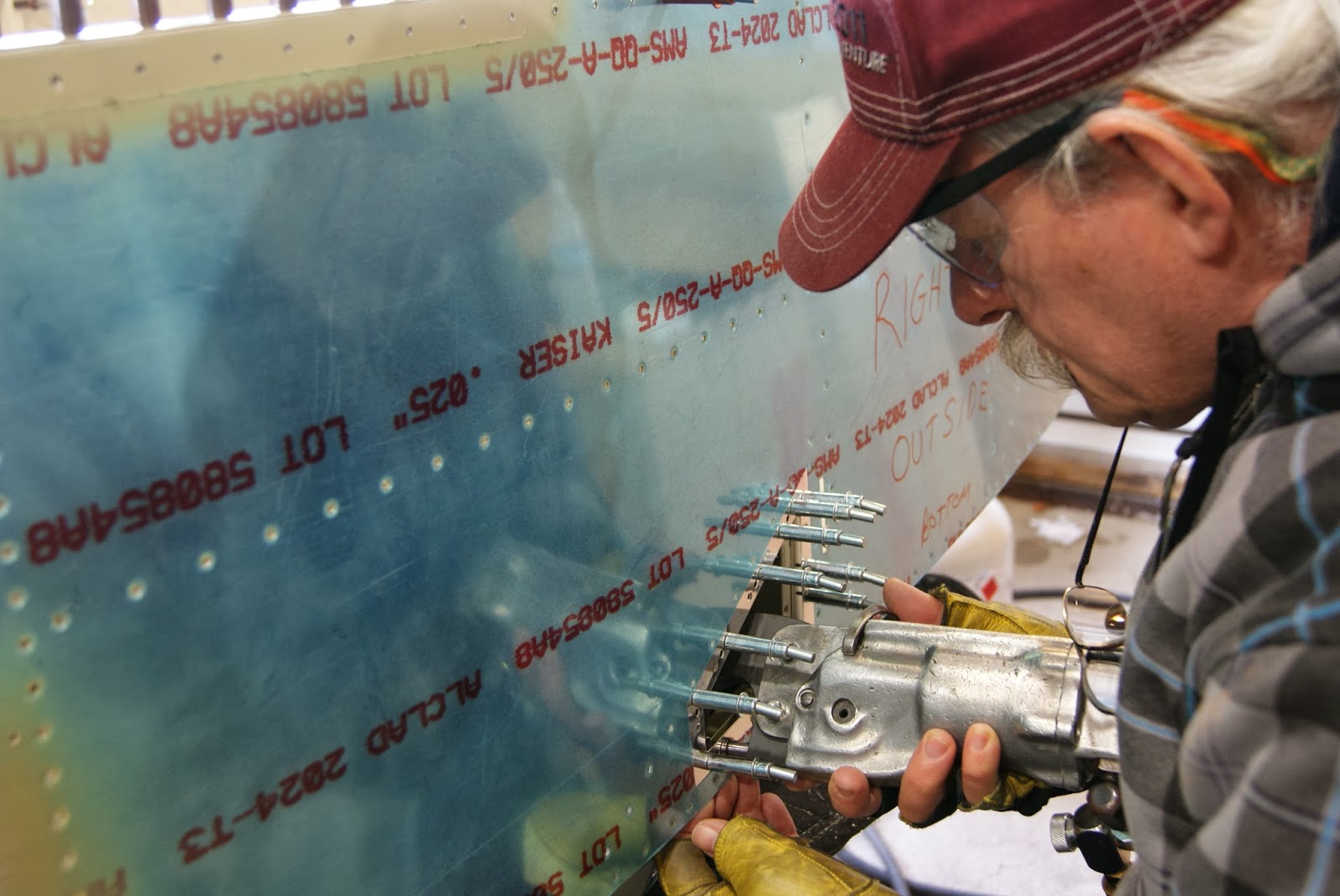 Using the pneumatic squeezer to attach the nutplates onto the F-1270-R fuselage side skin using AN426AD3-3.5 solid rivets.

The nutplate rivets in the upper portion of the triangle would have required trying to use the pneumatic squeezer upside down and setting the rivets blindly … not an easy task. To make the task easier, thought it best to just flip the skin upside down to eliminate the access problem ... worked great! 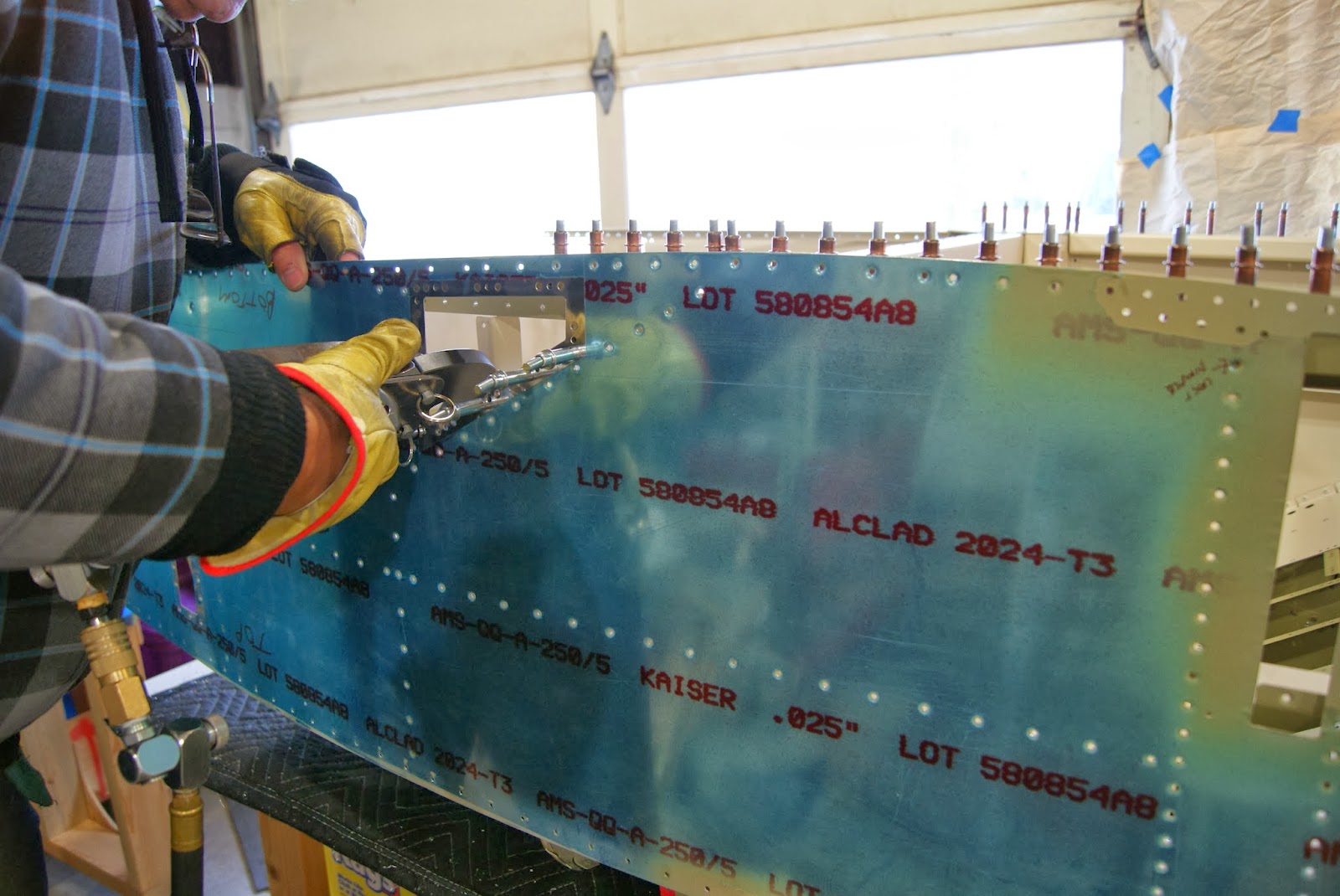 Finishing up riveting the remaining nutplates while the F-1270-R skin is hanging upside down. Note the snow stopper paper covering the gap between the door and the frame in the background. 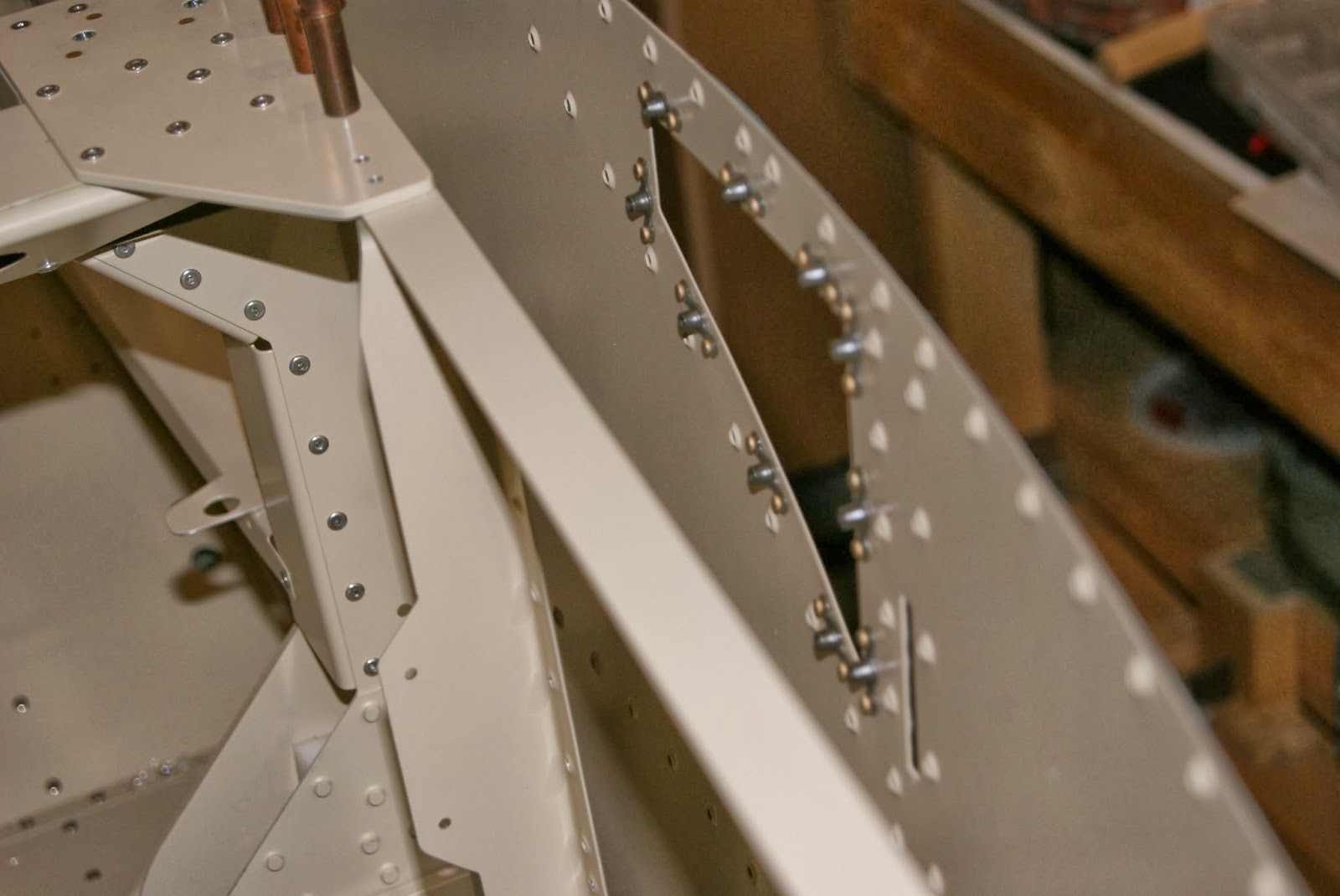 Completed riveting of the nutplates onto the F-1270-R skin using AN426AD3-3.5 solid rivets in the place of pop rivets.

Decided to move on and begin preparing the air vents for assembly. The right F-1096 vent doubler and F-1086 brackets were secured onto the F-1270-R side skin with Clecos and readied for riveting. The four parts that make up each of the vent doors were rounded up and Clecoed together. These parts were match drilled prior to painting, so it is necessary to make sure they go together in the same position as drilled. I had used wire to denote the alignment of the pieces. 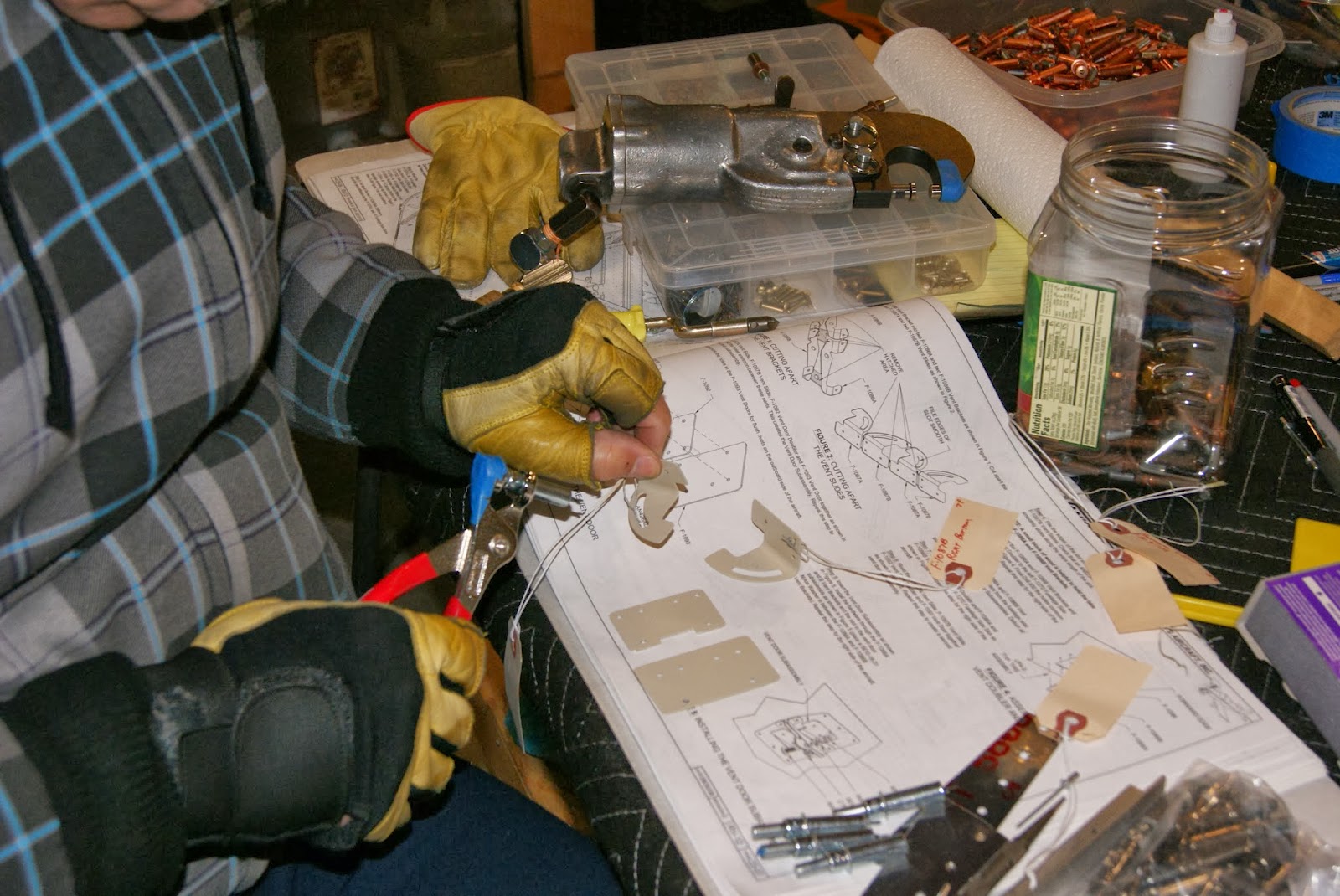 The four parts that make up one of the vent doors ready for assembly. 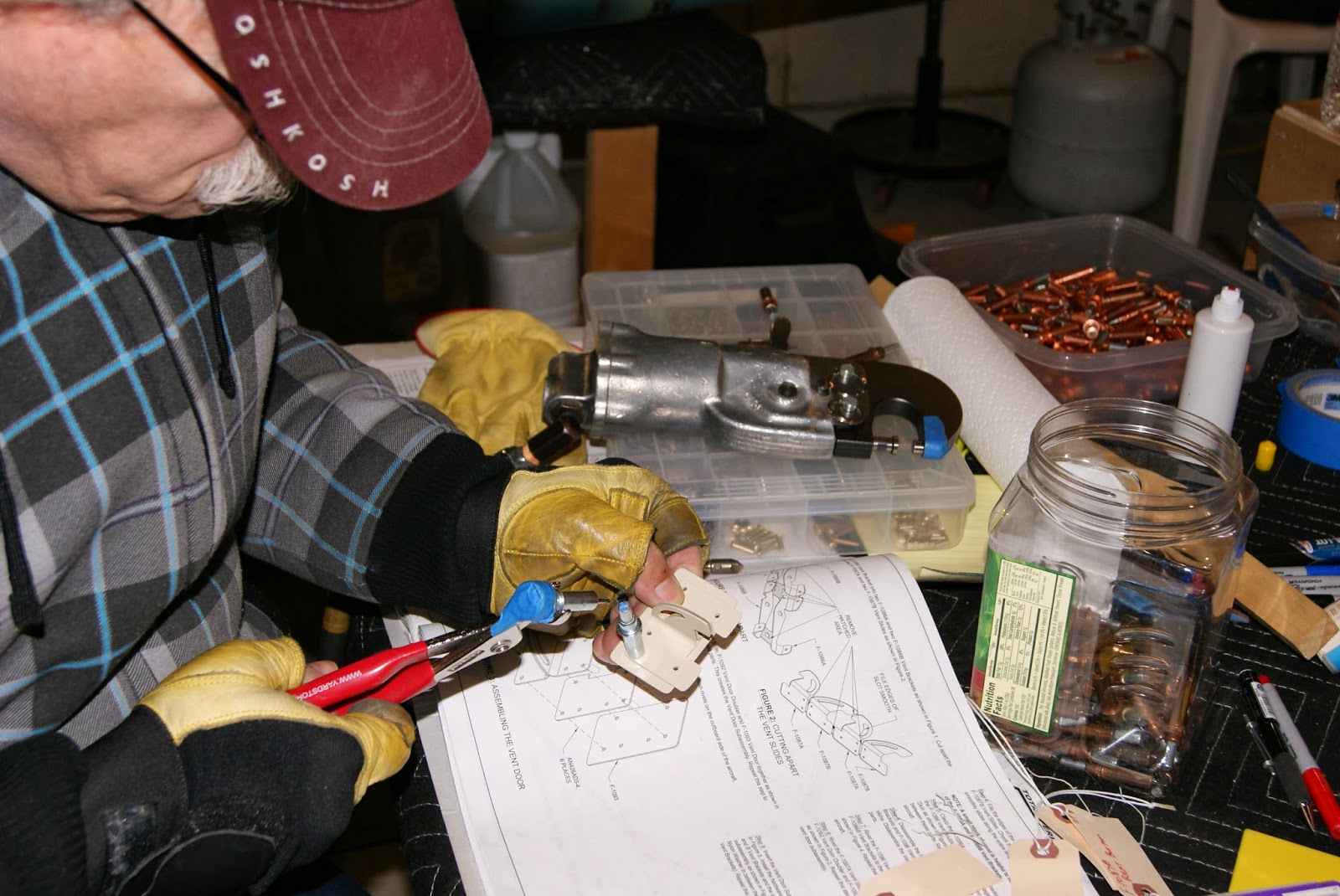 Assembling the four pieces that make up the vent door. 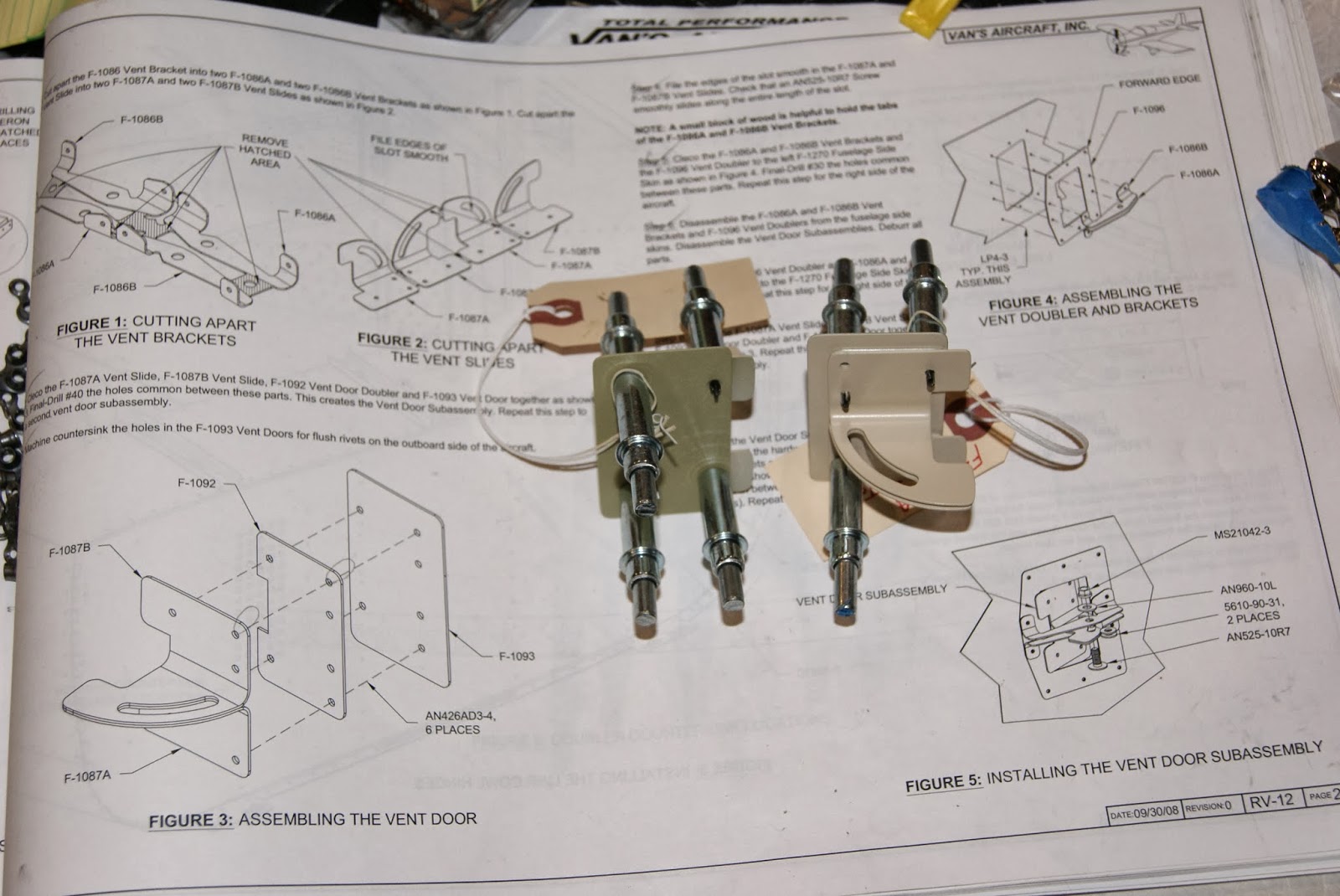 Both left and right vent doors Clecoed together and ready for riveting. 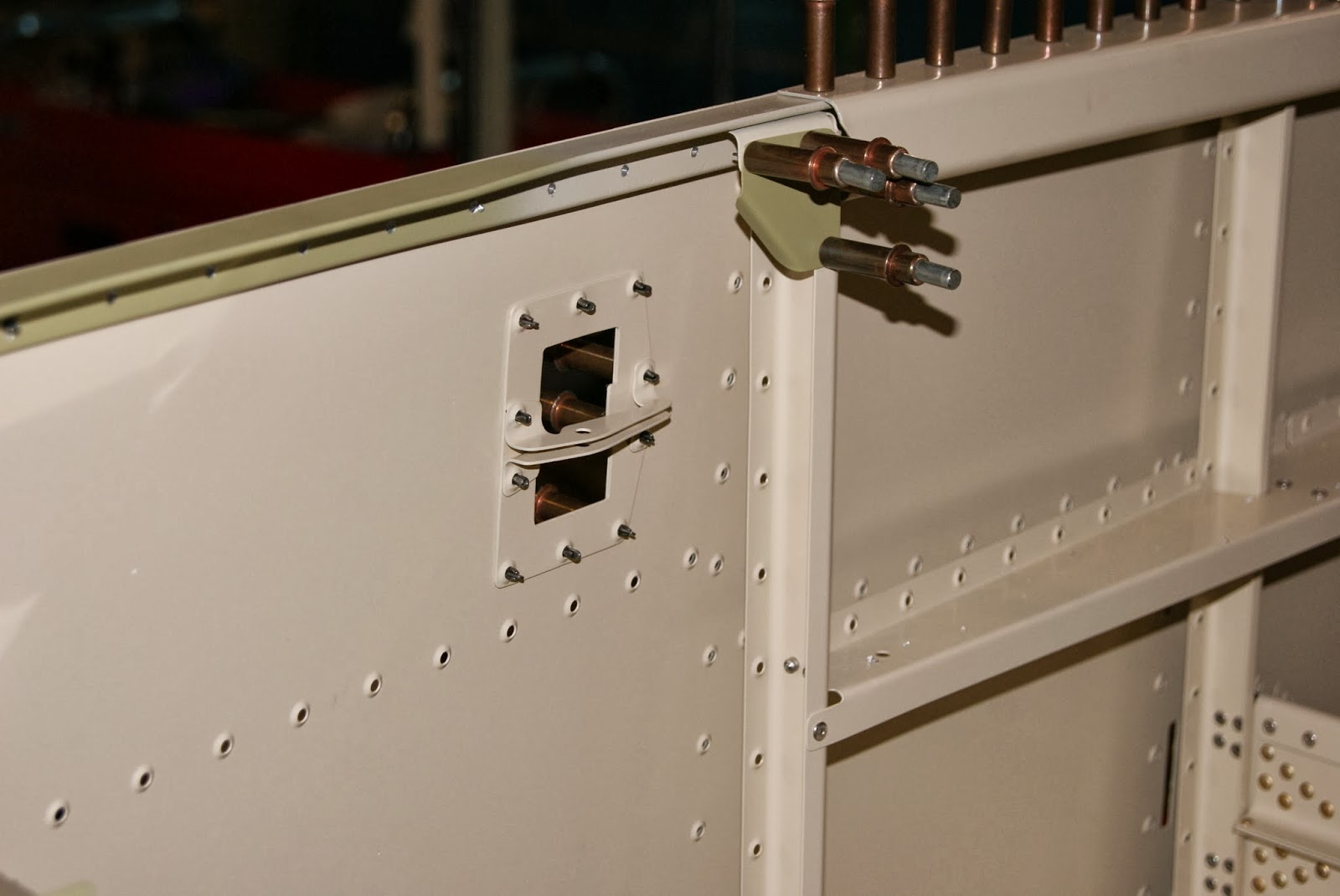 The right F-1096 vent doubler and F-1086 brackets secured to the F-1270-R fuselage side skin with Clecos ready for riveting.

The plan is to finish riveting and installing the vent doors during the next work session.
Posted by John at 7:49 PM