It was a good day in the office not huge progress, but progress … beginning with the riveting of the 10 nutplates onto the left F-1270 fuselage side skin. Here again the nutplates were installed substituting AN426AD3-3.5 rivets for pop rivets and using the pneumatic squeezer outfitted with a 1 1/2" yoke. The bottom row of nutplates and one side were done with the skin in place … then it was flipped upside down so the remaining nutplates could be riveted easier. 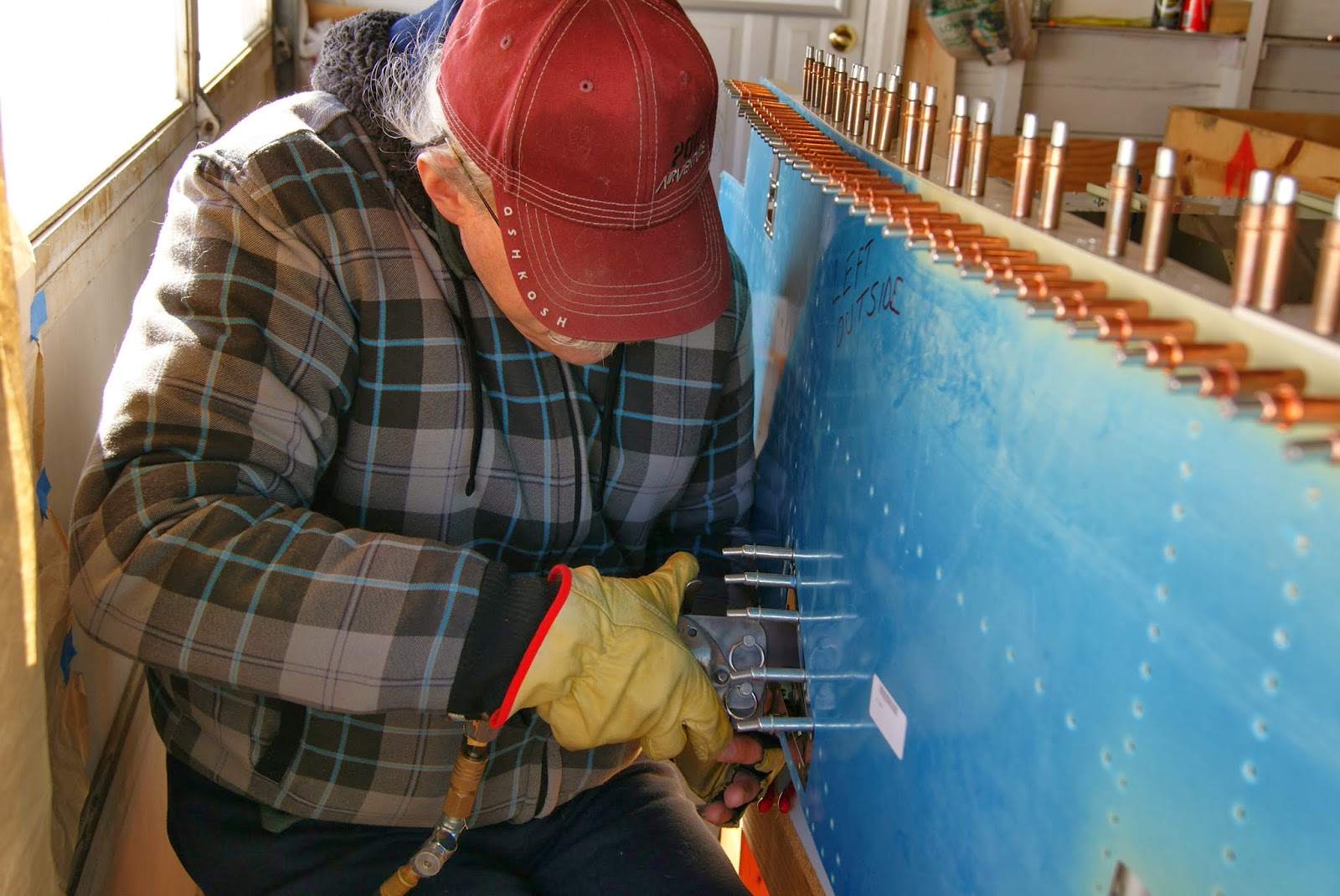 Using the pneumatic rivet squeezer to install one of the 10 nutplates onto the F-1270-L side skin using AN426AD3-3.5 rivets in place of pop rivets. 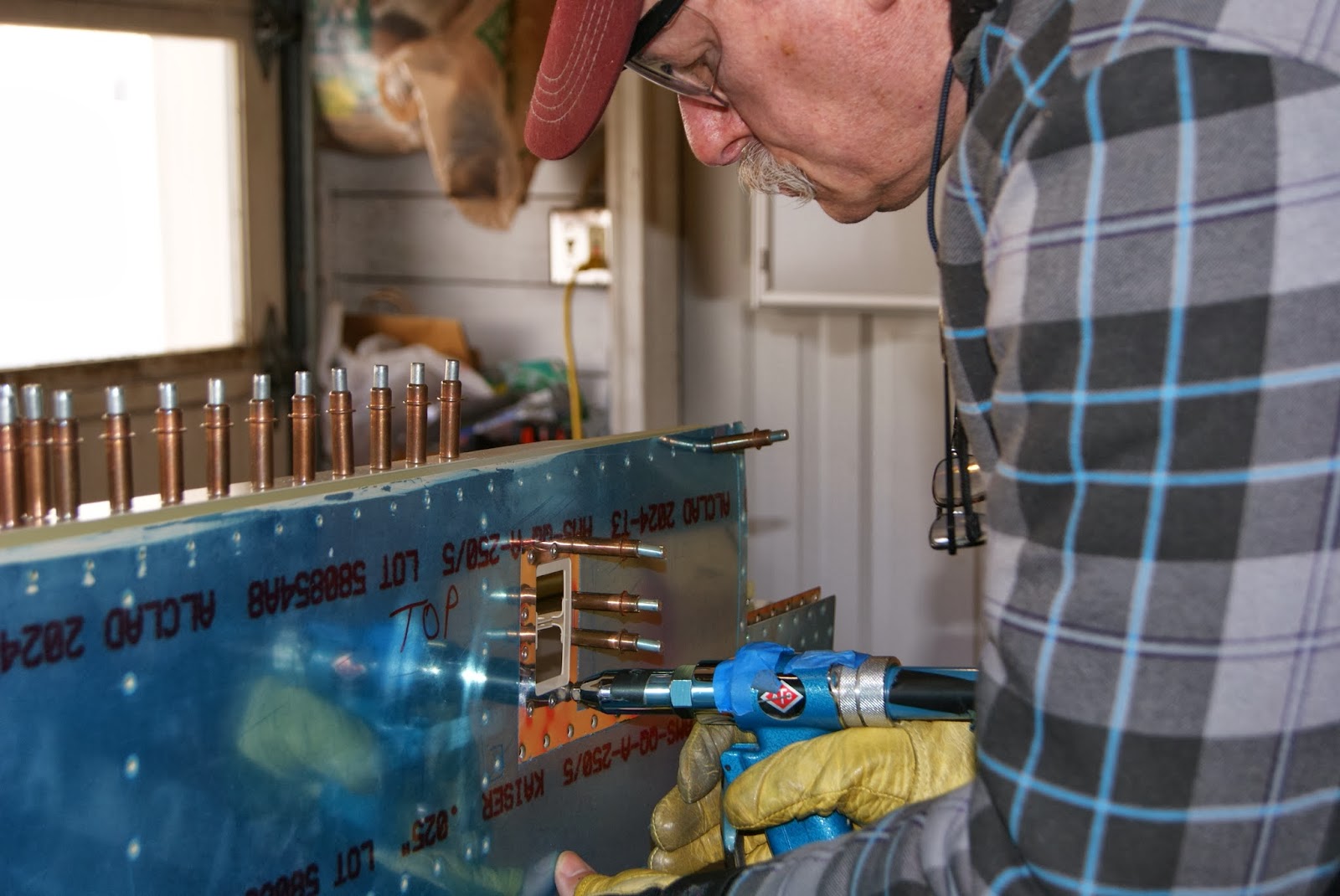 Riveting the F-1096 vent doubler onto the right F-1270 fuselage side skin with the pneumatic rivet puller using flush pop rivets in place of LP4-3 rivets. 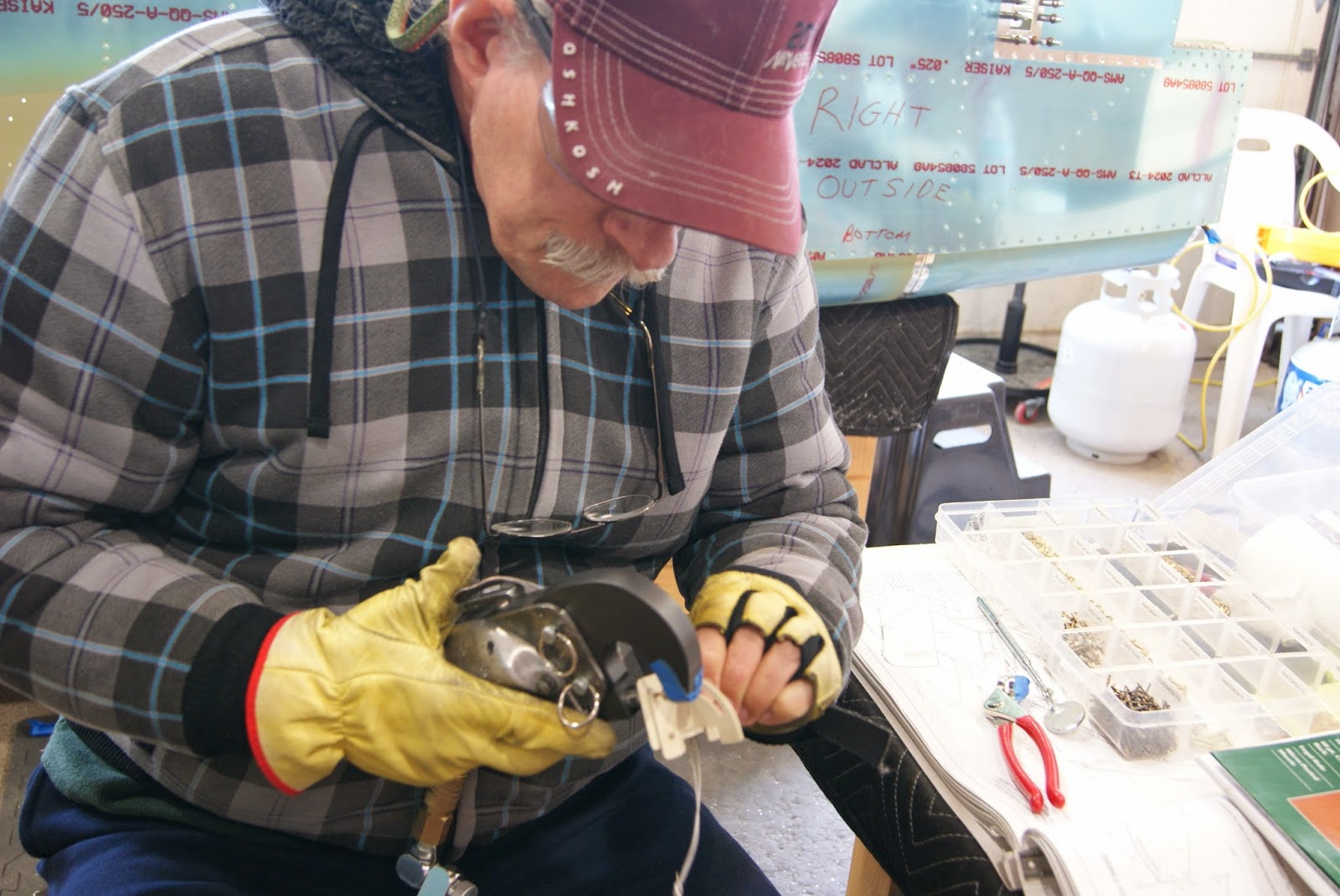 Using the pneumatic squeezer to rivet one of the vent door assemblies together with AN426AD3-4 rivets.

The plans instruct the builder to install the vent door using an AN525-10R7 screw … which there were issues with. A few months ago while prepping the parts for the air vent assembly, the plans instruct the builder make sure the screw will fit into the slot on the F-1087A&B parts. However they failed to mention to ALSO make sure the screw will fit into the  hole on the F-1086A&B vent brackets. After riveting the brackets for the right air vent in place, discovered the unthreaded shank of the screw would not fit in the hole. A few strokes with a tiny rat tail file fixed the problem … but it would have been a whole lot easier had I checked the fit prior to installing the part as I usually try to do. 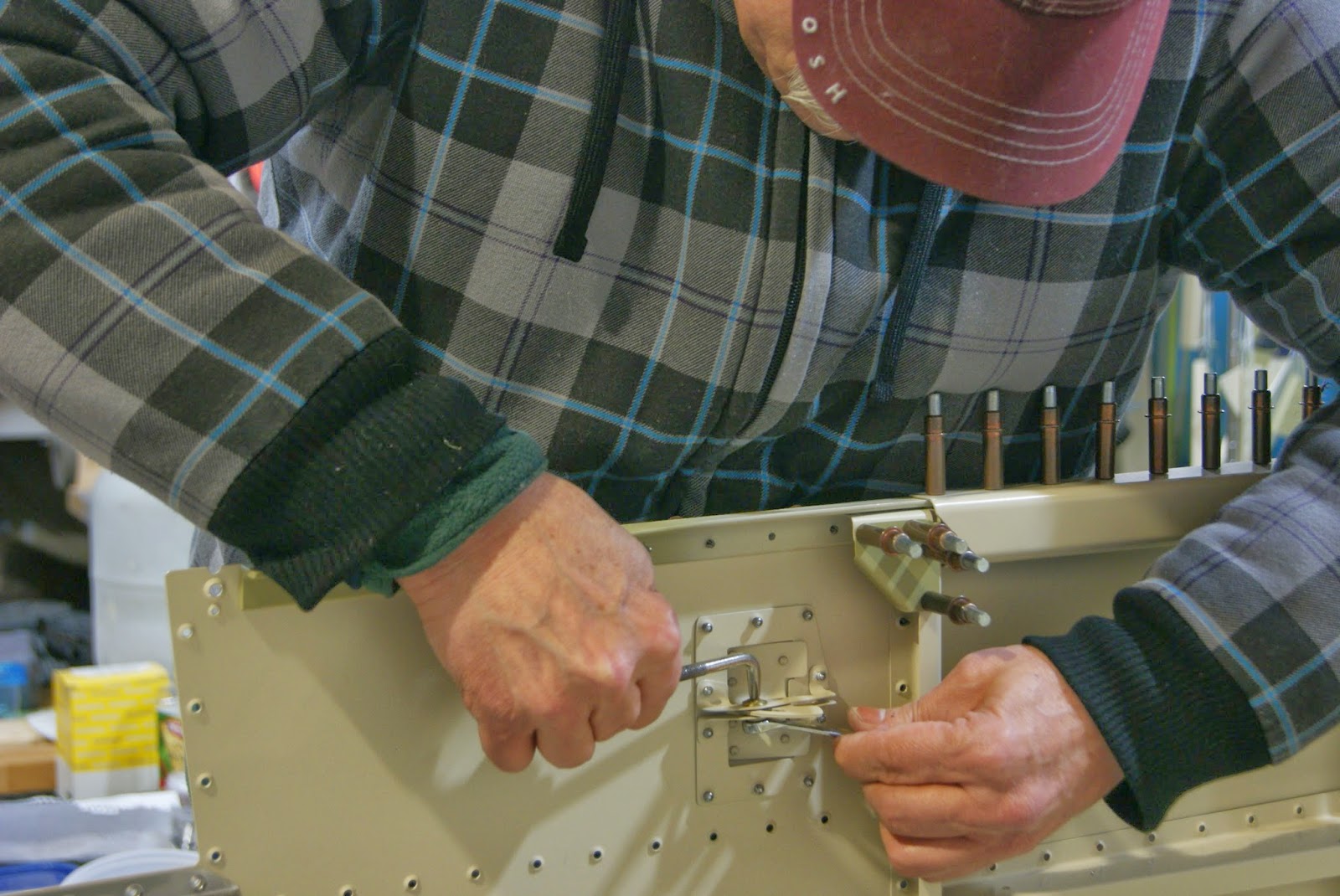 Tightening the mounting screw on the air vent door assembly … in summer this vent becomes the RV-12’s air conditioning system.

The plans show the AN525-10R7 screw going in from the bottom with the locknut on top. I don’t like the idea of having a screw mounted that way so installed mine from the top … should the nut ever come off, the screw will not fall out and possibly allow the vent door to blow off the aircraft.  I do understand why Vans shows the screw installed from below is because when the instrument panel base is installed, there is no room for a screwdriver so there is better access from below. However, my 90 degree offset Philips works well here and will also allow access from either inside underneath the instrument panel base or from outside through the air vent. Because future access will not really be an issue, I placed the head of the AN525-10R7 screw in from the top placing my faith in gravity. 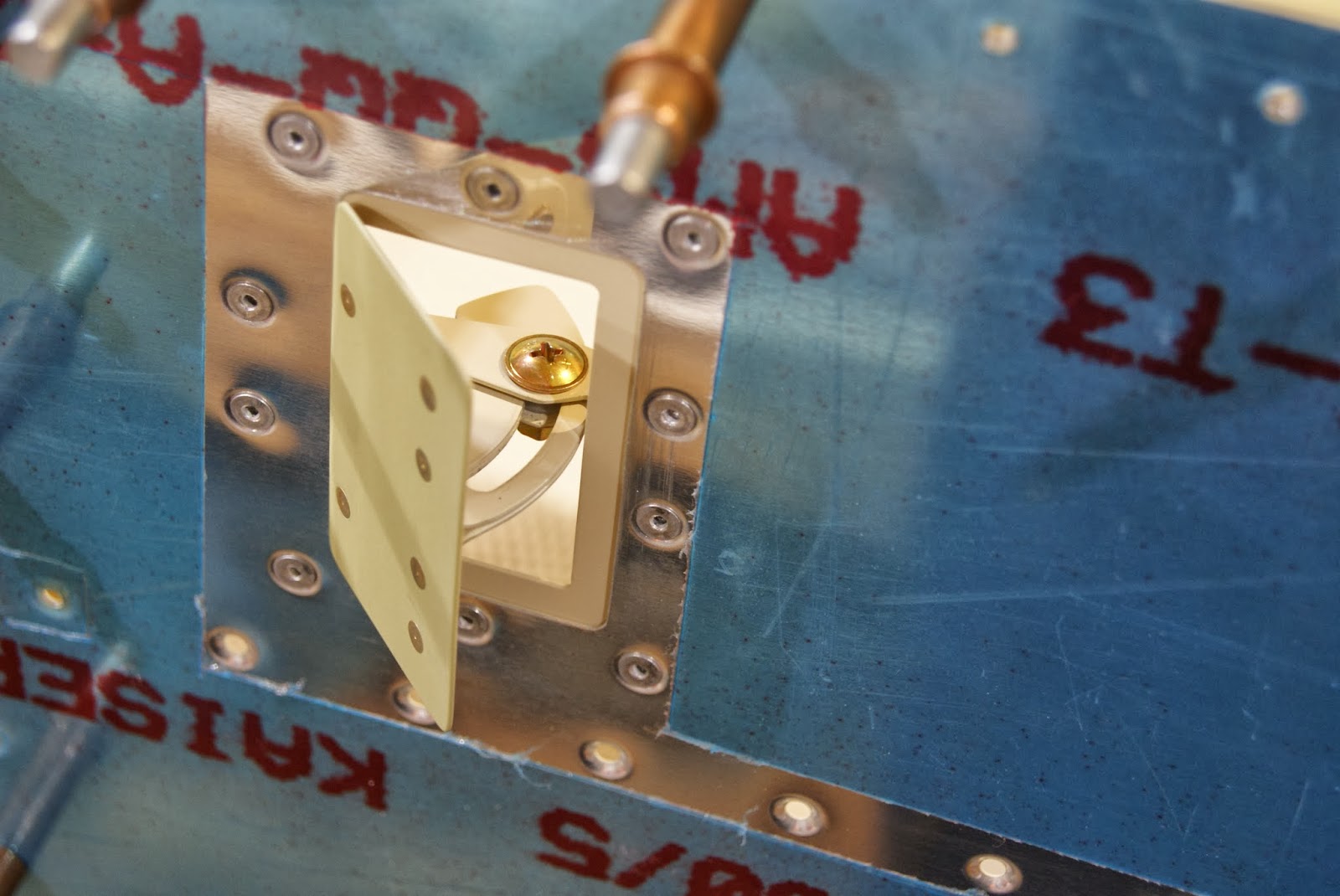 Half of the RV-12’s air conditioning system … the right air vent is now completed.

The final task accomplished for the day was to prepare the F-1270R side skin for dimples along the top row of rivet holes which will rivet onto the F-1255R longeron. Using a solder iron, the blue protective film was removed from the outer edges of the side skin, the top row of rivet holes were then deburred and dimpled using the pneumatic squeezer accessorized with the 120 degree Cleaveland dimple dies. The Cleaveland dies will work well for the Van’s CS4-4 flush pop rivets that will go into these rivet holes. Because free horizontal space is nonexistent in the shop, felt it would be best to temporarily raise the F-1270-R skin with Clecos about 6” higher than the longeron to allow dimpling the upper row of rivet holes while the side skin is secured to the fuselage. 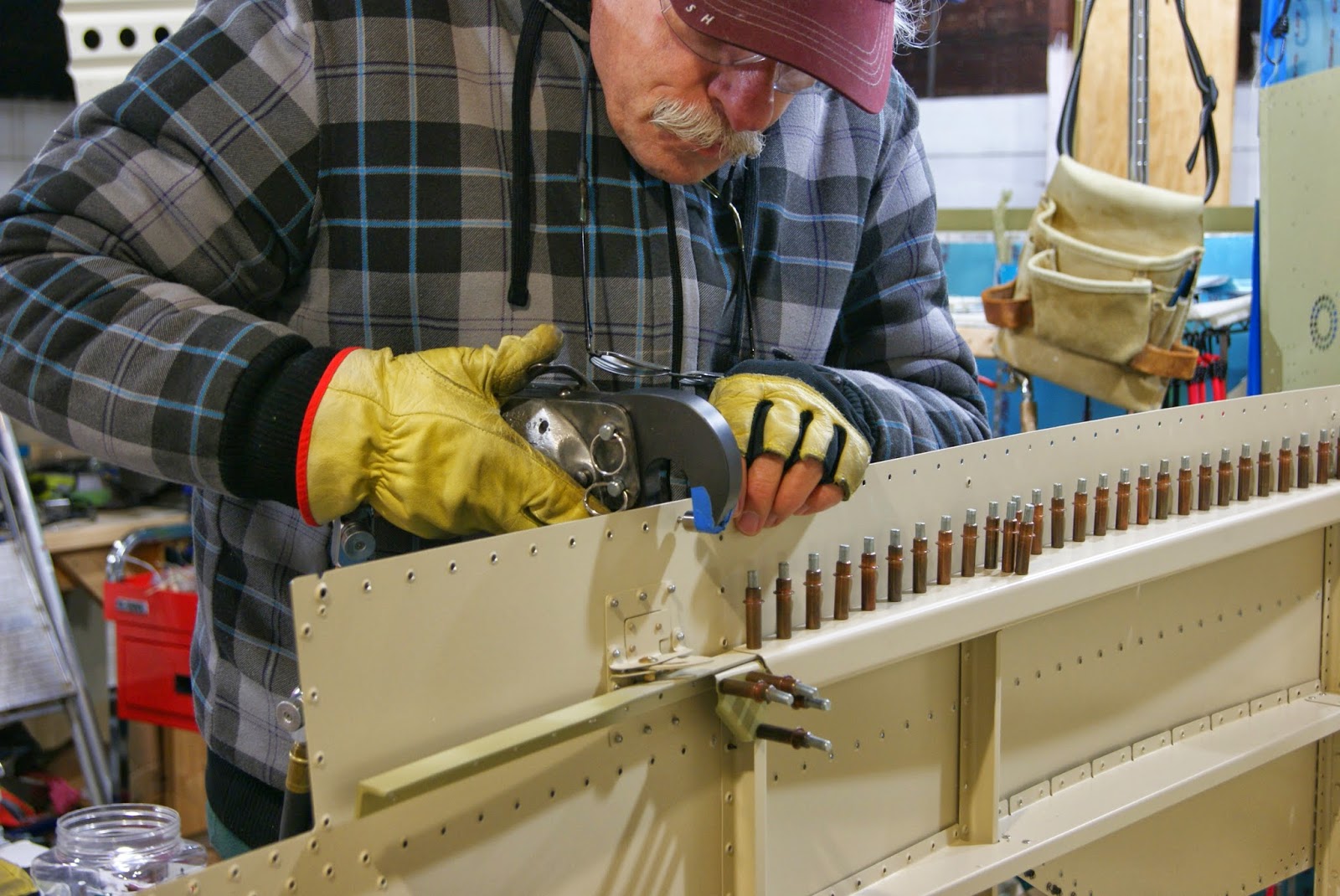 Beginning the dimpling along the top row of rivet holes on the F-1270R fuselage side skin using Cleaveland 120 degree dimple dies. Note the skin is raised approximately 6 inches for unobstructed access along the entire edge. 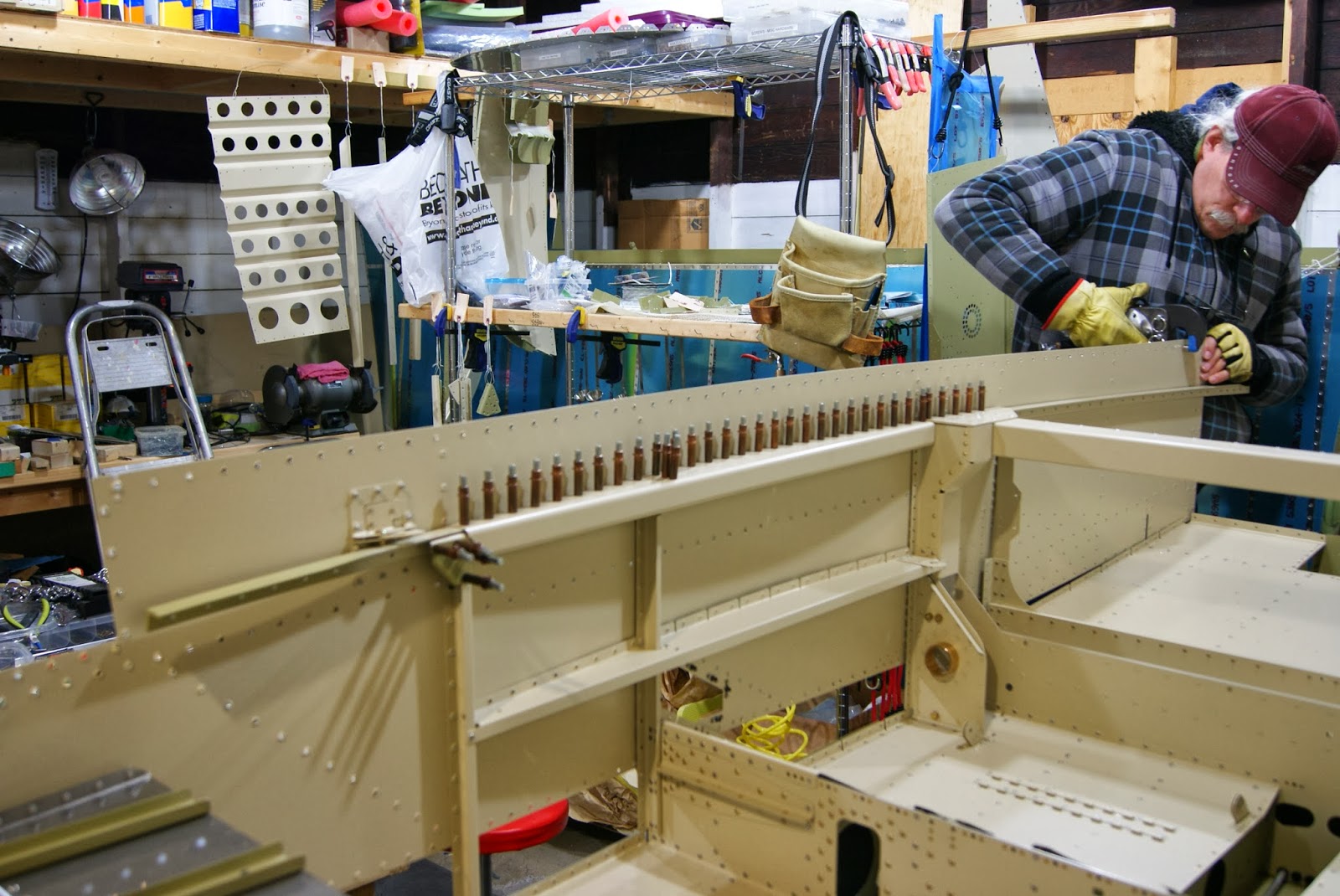 Finishing off the dimpling of the F-1270-R fuselage side skin’s upper row of rivet holes to accommodate the flush rivets being used on the RV-12 project.
Posted by John at 9:19 PM