For the moment I’ve decided not to finish up on section 23 of the plans and move onto section 24. It appears as though quite a few builders are now leaving the tail cone off until towards the end of the build … and also leaving the side skins off until the wiring is completed in the fuselage. If the side skins go on now, it is not a big deal because the fuselage can easily be rolled onto its side for access. But for the time being, I’ll leave the side skins off in the hopes it will be easier to perform some of the future assembly tasks.

Section 24 has the builder assembling and mounting the roll over structure. The roll bar serves a few functions in the RV-12 … it forms the seat for the canopy frame, secures the canopy latch, is the attachment point for the rear window, supports the cockpit light bracket, and performs the important safety feature of keeping the aircraft off your head in the event things go horribly wrong.  The latter we never want to test in real time.

As with most all of the fuselage parts, last fall all the roll bar’s components were assembled, match drilled, deburred and countersunk per the plans, primed and painted. At that time I made a note on the plans to leave a couple of rivet holes open because they would be needed to mount the optional lighting kit’s bracket for the cockpit light. Before starting a new section in the plans, I try to remember to read ahead and also look further forward if possible, plus check the drawings for the optional items as well. Glad I did, because I would have had to drill out a rivet and enlarge the hole after the roll bar assembly was installed when it would be much harder to get to. 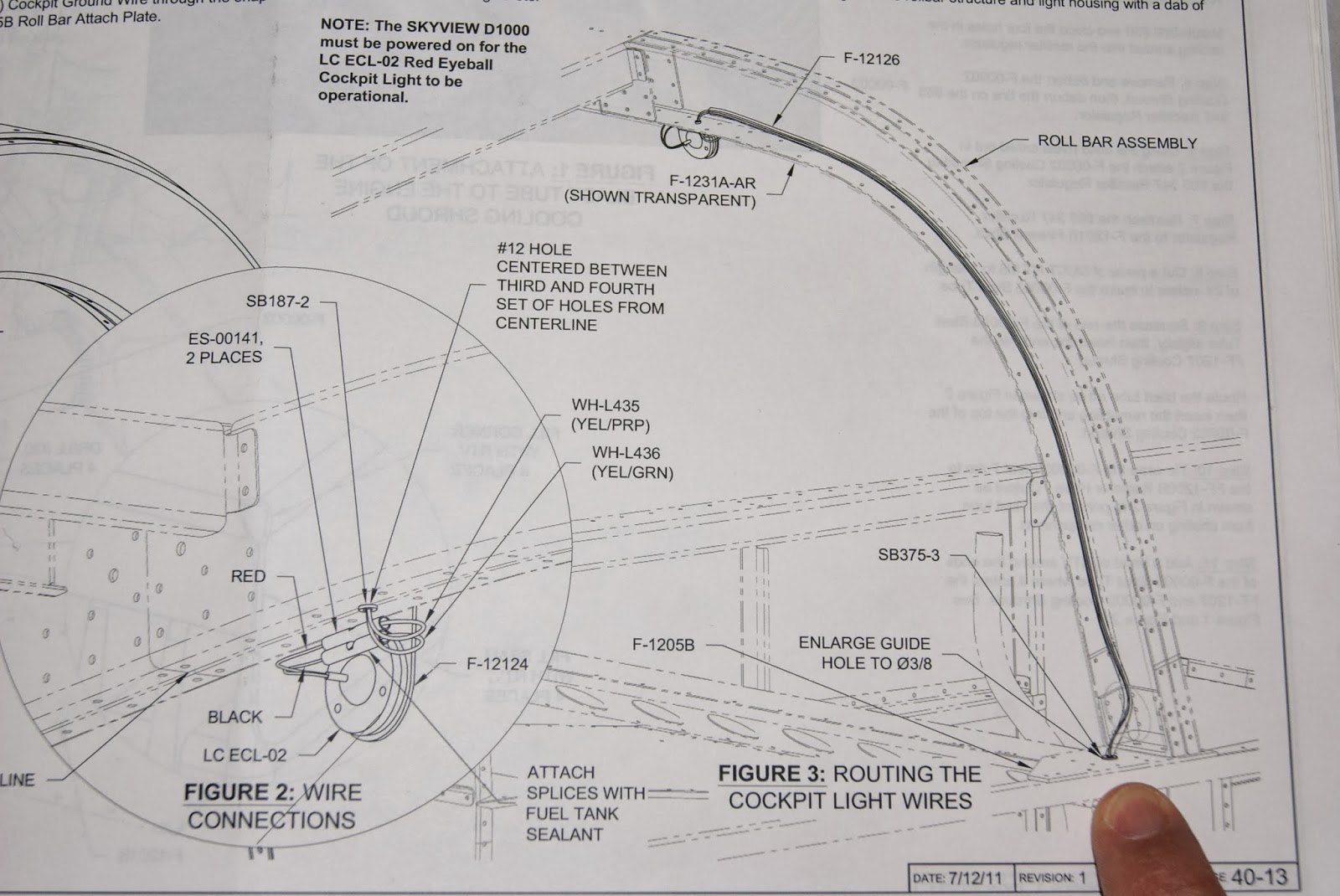 A photo of the portion of the plans that shows how the wires to the cockpit light are to be installed ... finger at lower right points to the rivet hole in question. 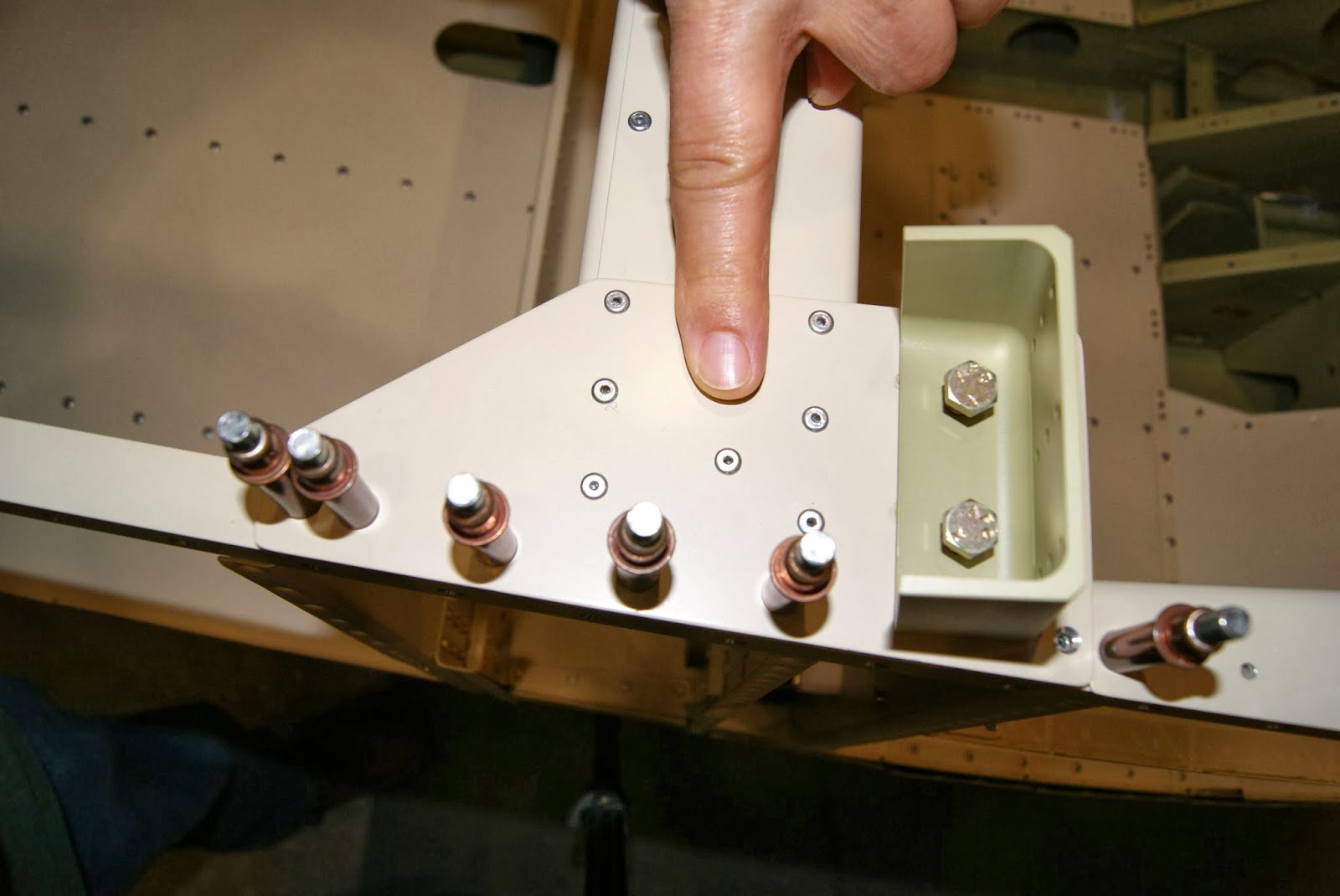 If installing the optional cabin light, DO NOT install this rivet in the F-1205B roll bar mounting plate when assembling the center section brace assembly.

The rivet installed in the right F1205B roll bar attach plate pointed to in the above photo required being drilled out because Van’s uses that hole to install a snap bushing for the wires that will go inside the roll bar assembly for the cabin light. After the rivet was removed, the hole was enlarged to 3/8" using a step drill. For those builders who already have the roll bar attached, it is not a big deal, just that the drilling will likely have to be done from the underside which, of course, just makes the job harder and a lot more inconvenient. 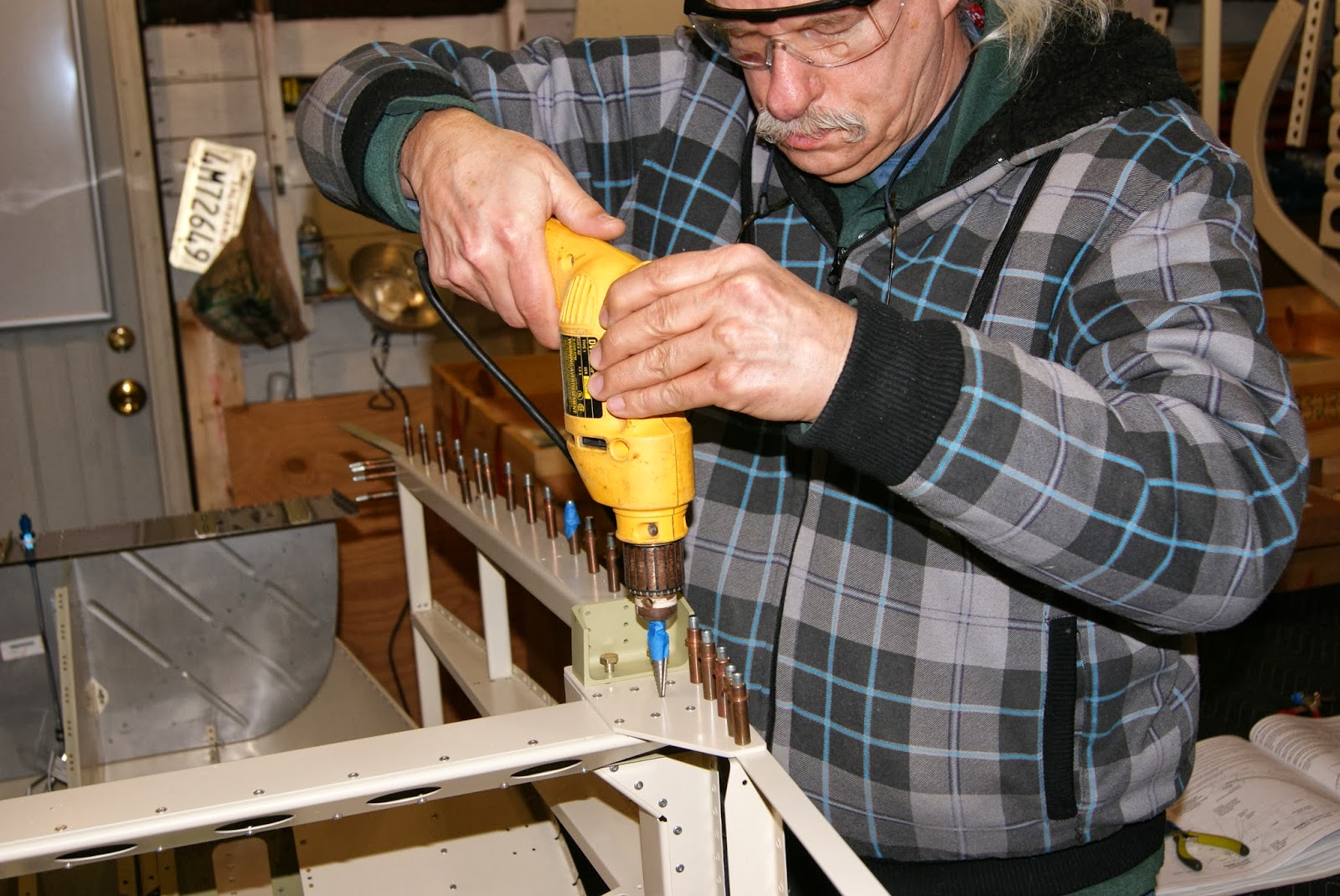 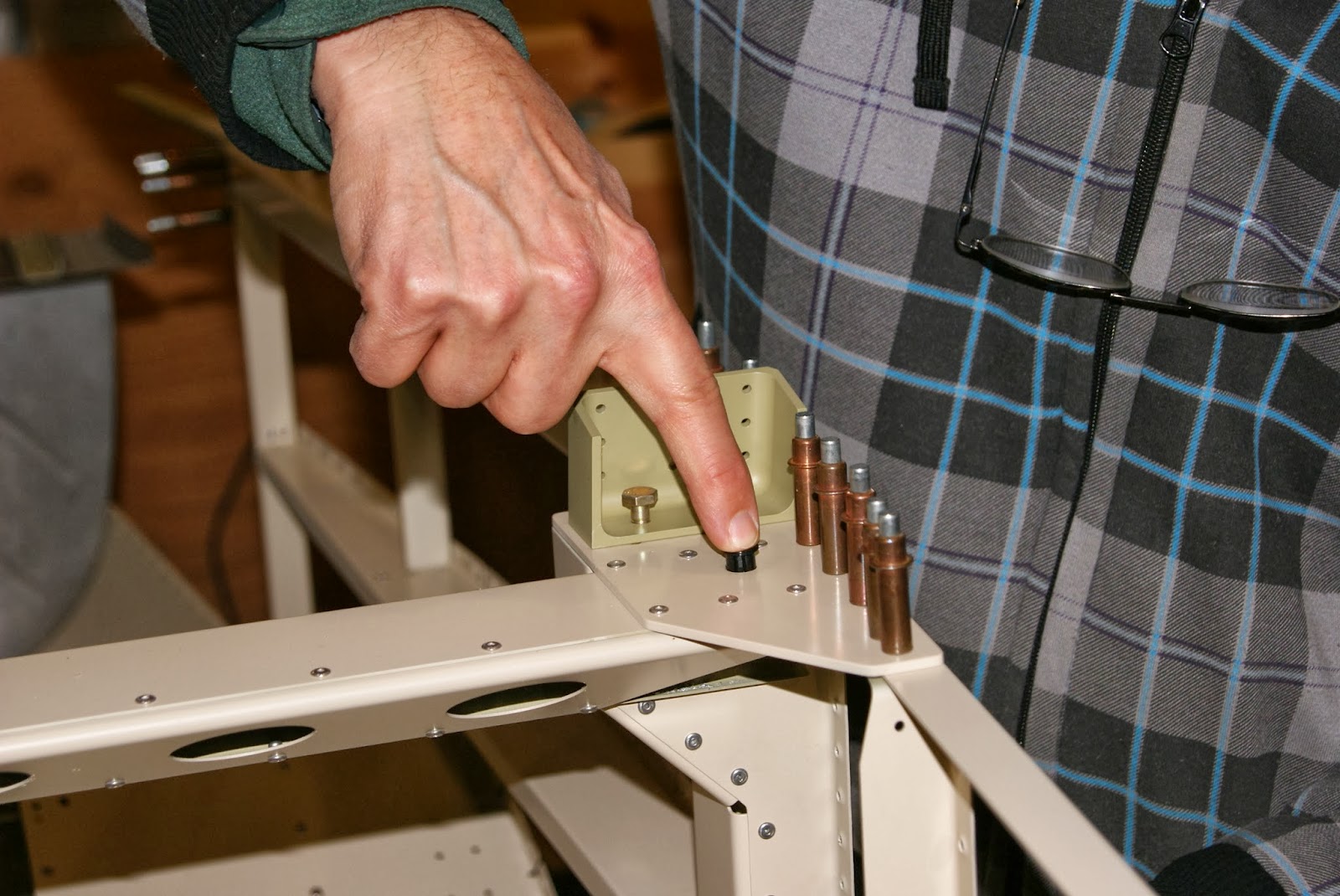 Installing the SB-375-3 snap bushing for the optional lighting kit’s cockpit light.
Now back on track, although more work, decided to test fit the roll bar assembly prior to riveting the roll bar structure together. Some builders have had issues getting the roll bar assembly to align correctly with the bases when they are bolted in position, so I wanted to do a dry run to make certain the width of the assembly will allow bolting to the roll bar attach plates … plus take measurements so while riveting on the bench, the proper spacing can be kept. 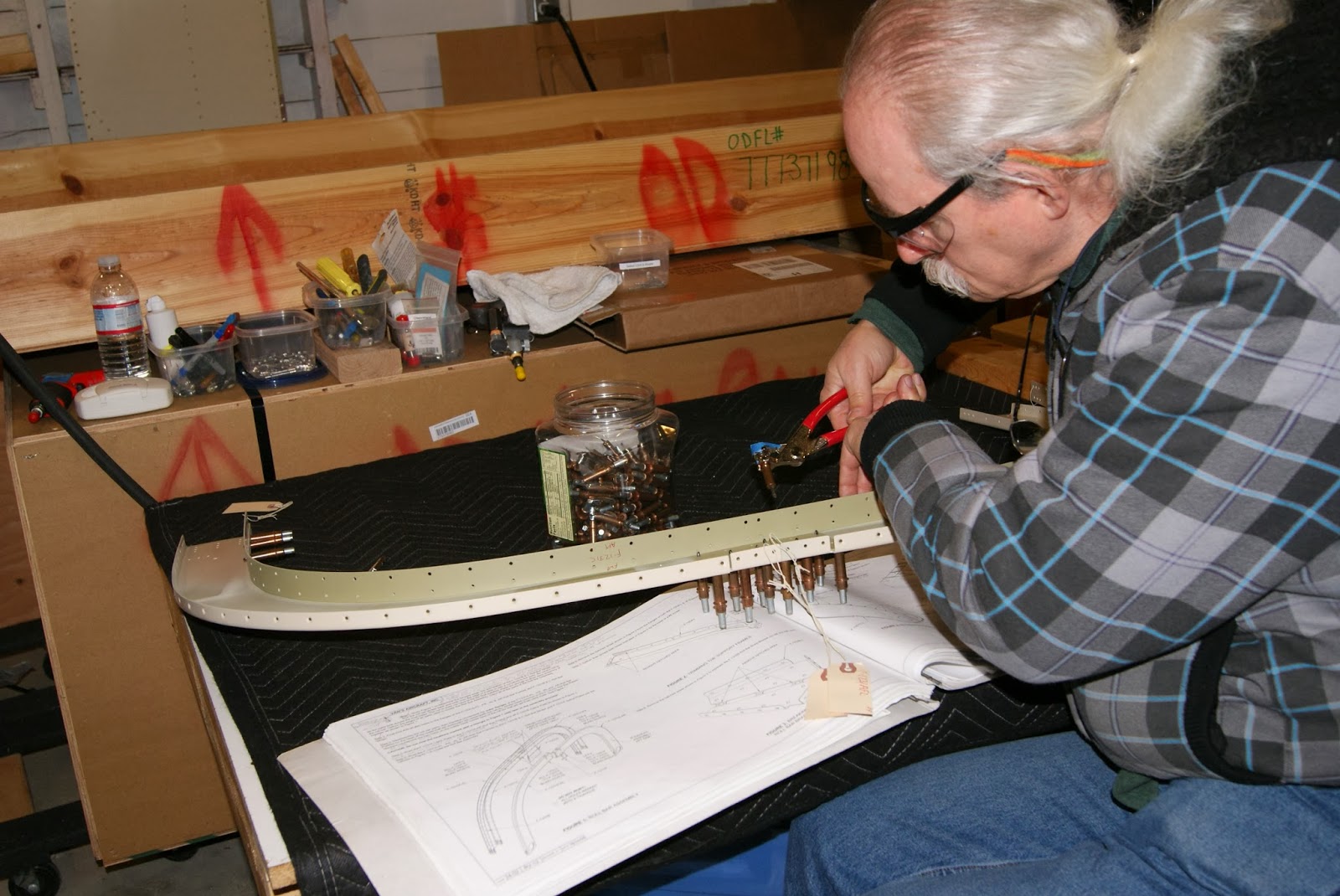 Assembling the forward half of the roll bar assembly with Clecos. 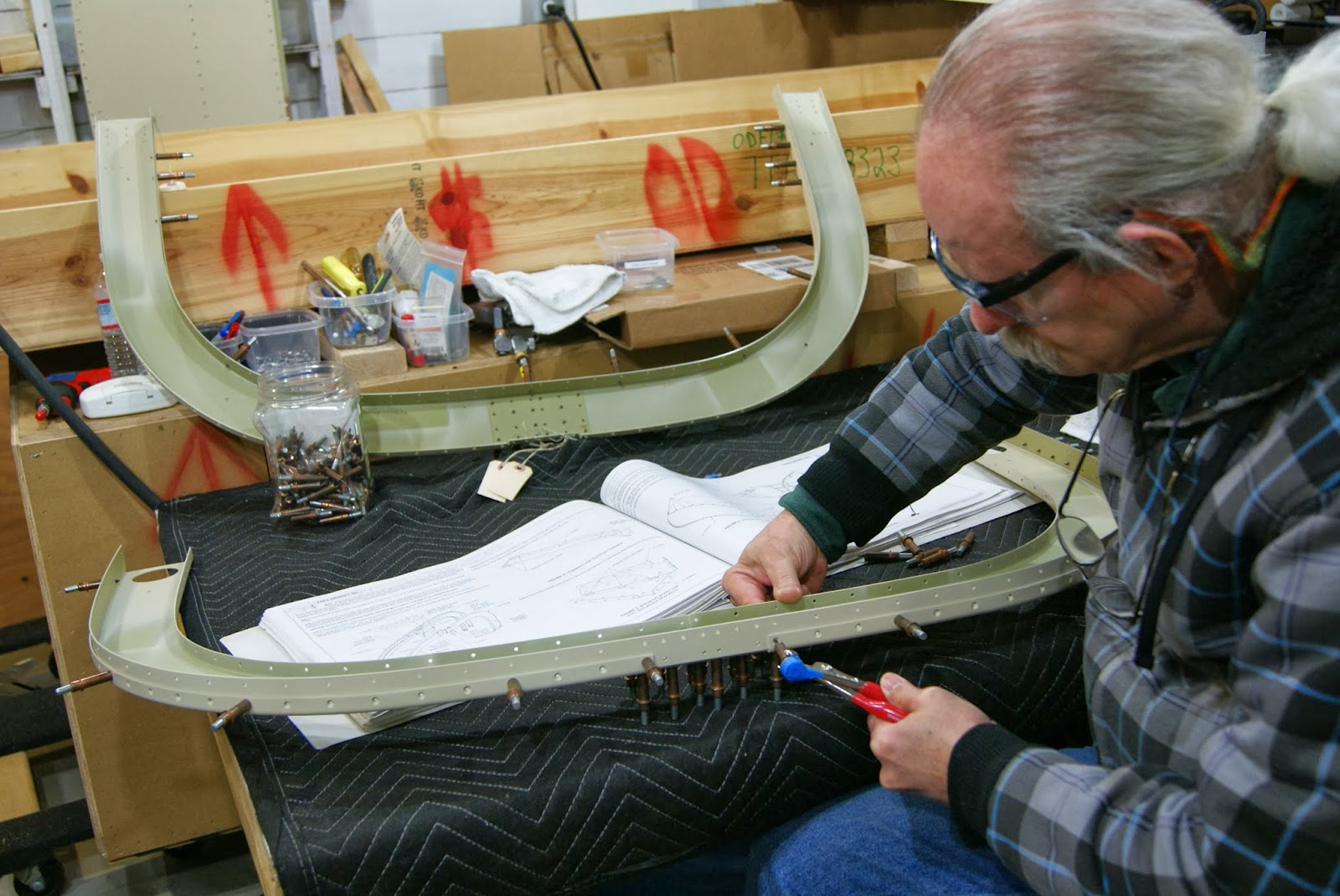 Assembling the aft half of the roll bar assembly with Clecos. 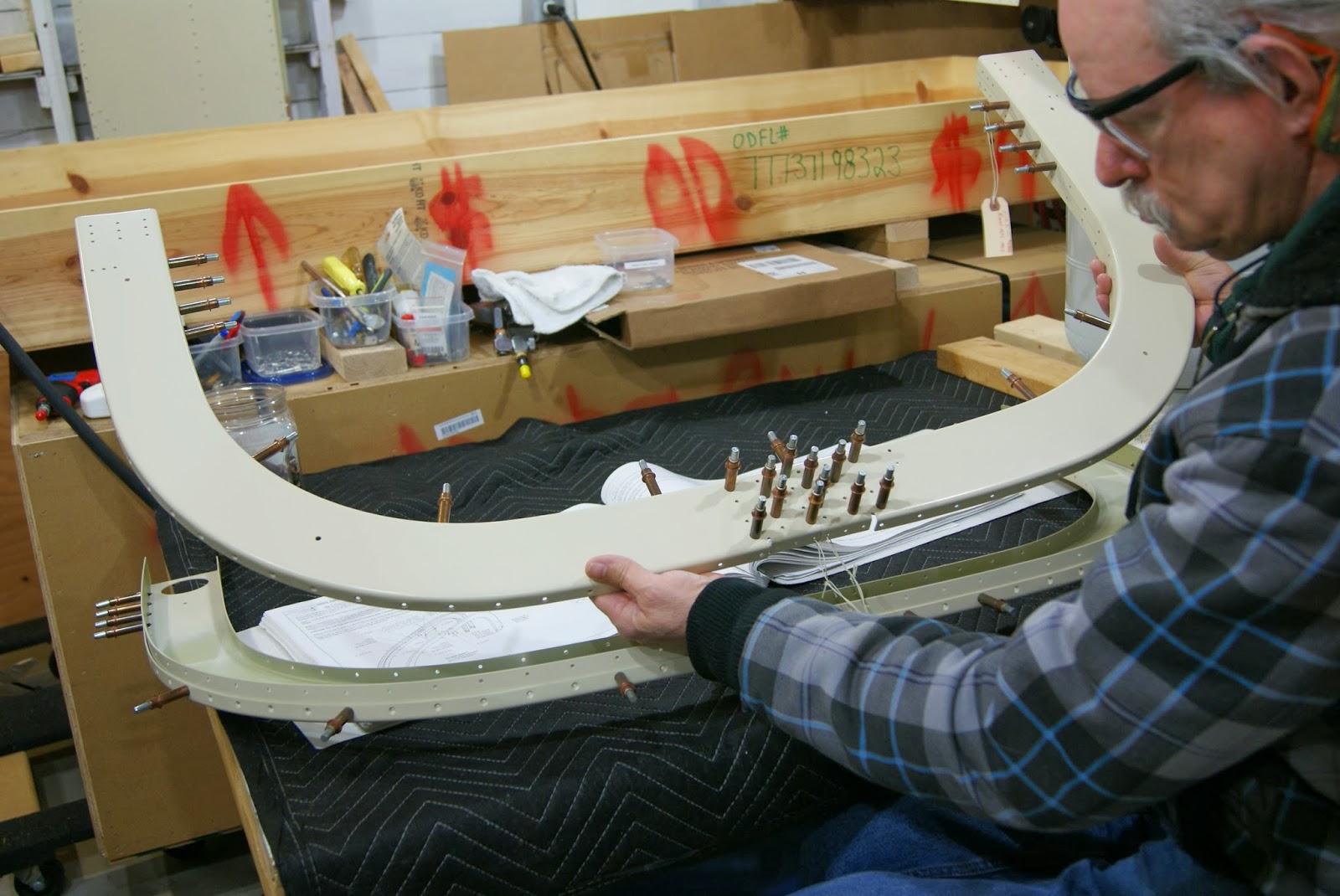 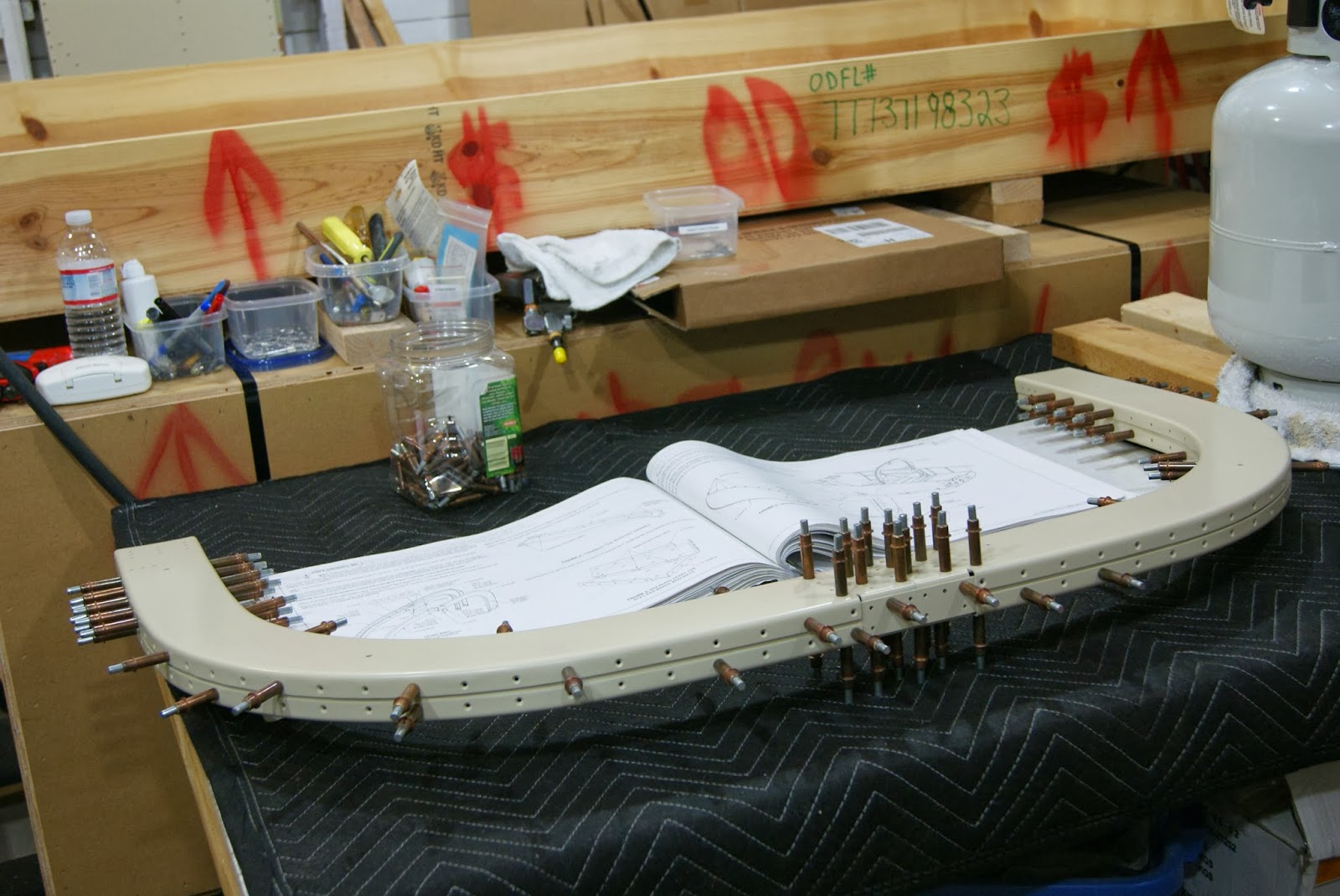 Roll bar hoops temporarily held together with a few Clecos and ready for a test fitting. 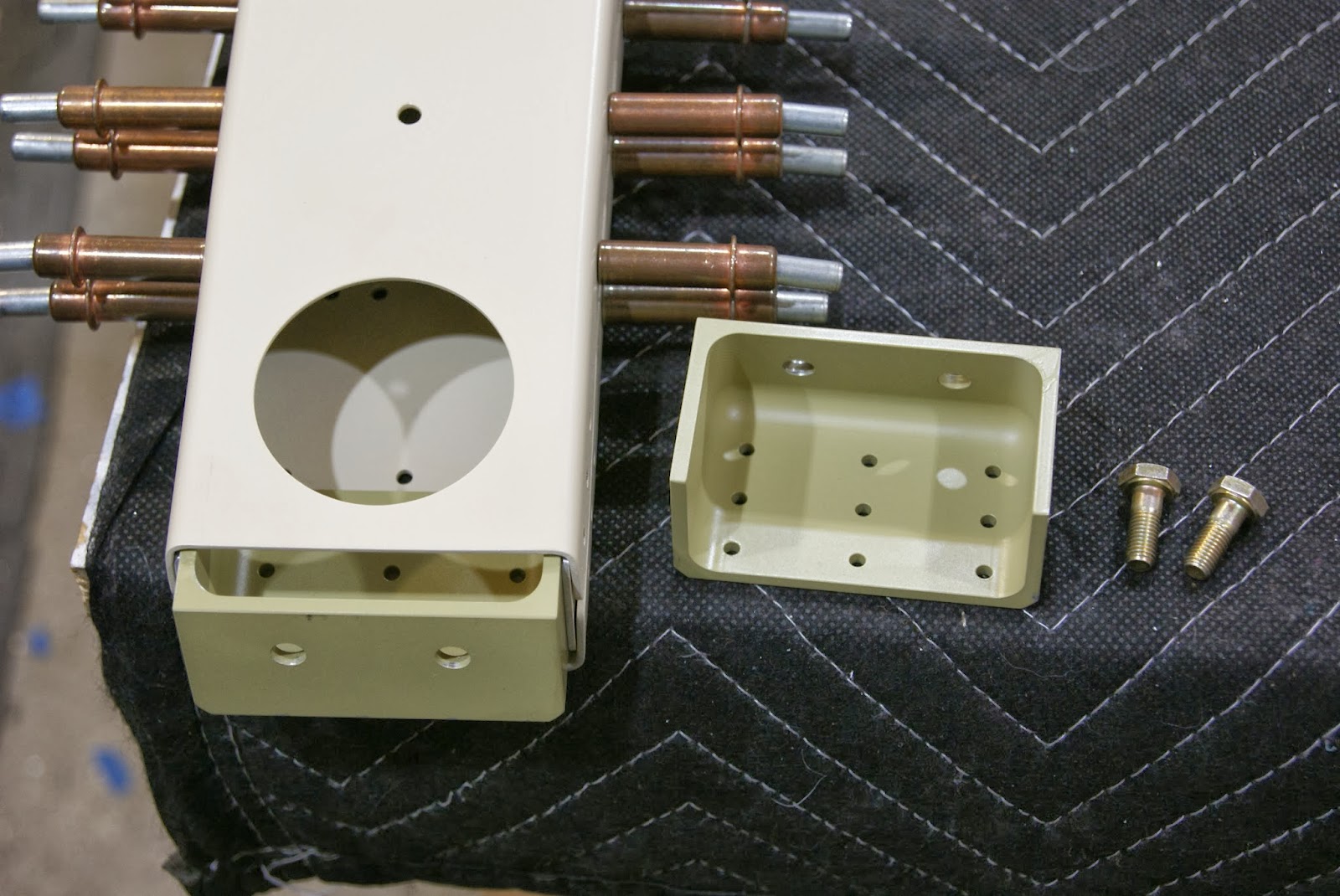 F-1231D roll bar base almost in position inside the roll bar assembly.

Once both the F-1231D roll bar bases were in position inside the roll bar assembly, the entire assembly was positioned on top of the roll bar bases and one bolt was inserted on the right side and finger tightened a couple of threads (tough chore through the hole) then a bolt was inserted into the left side and it aligned nicely to the mounting plate hole … verifying the roll bar is at, or close to the proper width. I gave a little tug on the structure to see if it flexes … yep, just enough to make small adjustments. Unfortunately, I did not take any photos of this part of the process … did not want to take my hands off the roll bar while it was precariously perched on the mounting plates with only a thread or two holding it.

Now that I have the warm fuzzy feeling the roll bar assembly will fit OK, will take some measurements at the base to insure the same spacing is kept during the riveting process. Now the assembly needs to be disassembled so the internal F-1231E splice plates can be riveted onto the roll bar halves. In fact, after the splice plates are riveted in position, I am toying around with the idea of riveting everything together while the parts are in position on the airplane. Have to think about that a bit...
Posted by John at 10:21 AM