Canopy Frame Installed On The RV-12 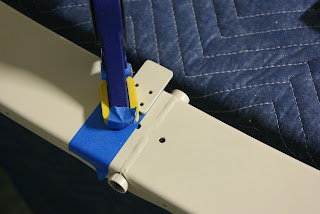 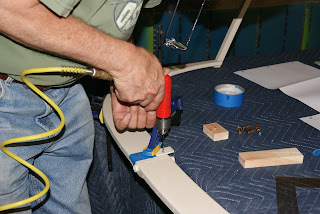 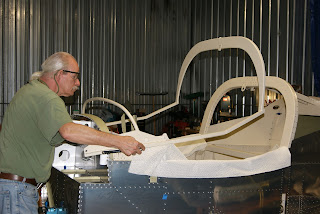 Placing the WD-1219 canopy frame in position on the fuselage to be secured with AN4-6A bolts. 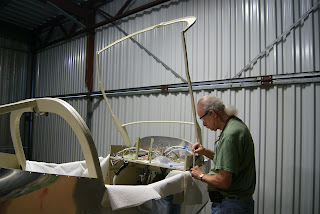 At this point, Mike came over to give me a hand in installing the landing gear legs … but I was running behind schedule a little and had not had time to round up all the parts necessary. Mike assisted in removing the canopy from the crate so the gear legs and tires residing beneath it could be retrieved. Rather than hold Mike up, we decided if the work bench under the fuselage was canted at an angle I would be able to begin installing the left landing gear hardware by myself and Mike could come back the next afternoon so the same could be done for the right side.

Began the instillation of the U-1202 C&D outboard doubler and wear plate on the left side and was just barely able to get the pieces tightened by myself. Now that the turtle deck skins are installed, trying to hold tools on hardware inside the center channel while reaching inside the cockpit to tighten the nuts was difficult to do by myself. Fortunately, I’m tall enough and have a fair amount of reach, so was just barely able to get the job done. My suggestion for builders doing the build by themselves is to leave the turtle deck skins  off until you have mounted the gear legs … it will be much easier to reach inside the cockpit to tighten the nuts. Also of note: The doubler plates are installed with large #3 Philips screws, only one of which can be turned with a screwdriver. To access the inboard screw, it requires a 90 degree Philips screwdriver or a #3 Philips bit on a ratchet (which is what was used). 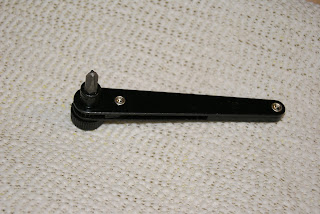 This tool outfitted with a #3 Philips bit allowed access to the inboard Philips screw in the U-1202D wear plates.

Unfortunately, no photos were taken of the gear work because of a huge upsetting distraction. While assembling the hardware for the gear leg instillation it appeared as though I was missing two of the four AN4-24A bolts. I had not remembered installing any of these bolts to this point, so checked the inventory sheets … yep, received four. Where could the other two bolts have gone?  Spent the next couple of hours combing through all the parts in the hangar … several times. I was at a loss because ALL the hardware was placed into parts bins during the inventory. Next, the plans were reviewed page by page to verify the two bolts were not used incorrectly at a wrong location. Nope, the only bolts nearly that long had holes drilled into them. I was at a total loss … so finished torquing the wear plates and called it a night.

While closing the hangar door it came to me … many months ago when the parking brake was added, I could not use the measurements given in the plans for the brake lines to the fittings on the U-1203 gear attach bracket … so the two bolts were temporally used to hold the bracket in position for the measurements. Sure enough, the two bolts were in the holes on the right side. I felt both quite relieved and also very foolish for having not removed the bolts after the brake line was measured.
Posted by John at 7:32 AM