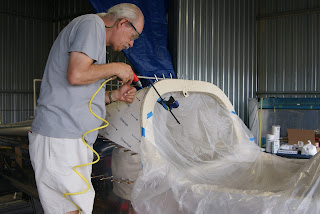 Using the predrilled holes in the polycarbonate aft window as a template to match drill the roll bar assembly with a #40 drill bit. 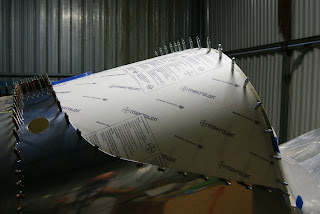 Completed #40 match drilling on the right side of the roll bar assembly.

Upon completing the match drilling of the #40 holes into the roll bar assembly, the aft window is to be left in place while the left and right F-1277 turtle deck skins are riveted onto the tailcone and fuselage. Here again, the flush rivets that have been used on the DOG Aviation RV-12 were substituted for the standard LP4-3 pop rivet for all the turtle deck to tailcone rivets.  Because the longerons are thicker, switched to a longer CS4-4 rivet for all the rivets that secured the turtle deck skins onto the longerons. 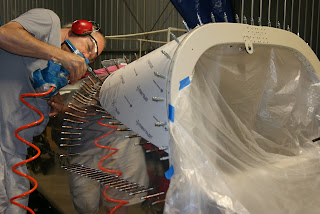 Beginning the riveting of the right F-1277 turtle deck skin onto the tailcone using flush rivets in place of LP4-3 rivets. 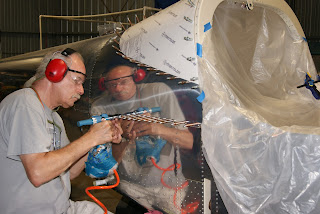 On the home stretch for finishing the riveting of the right F-1277 turtle deck skin to the longeron using the longer CS4-4 rivets.

Just short of finishing riveting of the right turtle deck skin to the longeron, I decided may be wise to go ahead and rivet the F-1254 support frames in place. I did Cleco them in place long ago when the roll bar was being riveted to assure positioning, but did not rivet them in when called for in the plans … knowing it is much easier to lean into the cockpit to work without them in the way. Was not planning on installing them until later because of a modification planned for the support frames … but decided that mod can be done to them at any time and the possibility of inadvertently crinkling the edges of the unsupported turtle deck skins is quite high, so common sense prevailed. 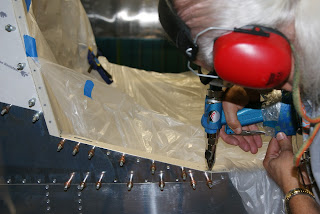 Riveting the right F-1254 support frame in place so the edge of turtle deck skin will have support and protection. 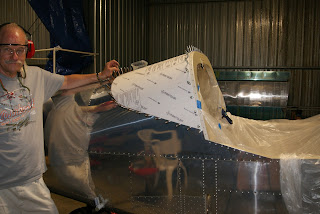 Completed instillation of the F-1277 turtle deck skin and F-1254 support frame on the right side.

Readers may have noticed I have been wearing hearing protection. No the pneumatic rivet puller was not loud …. however, the massive downpour outside hitting the metal roof of the hangar literally created a defining roar. You know when you can’t even come close to hearing the air compressor running (even standing beside it) things are way too loud. The noise level a good rain generates under the large metal roof is loud … but during a downpour, it is totally unbearable without hearing protection.

Moved over to the left side and followed the same procedure used on the right turtle deck skins … riveting from the top down then forward one rivet at a time. Here again flush rivets were used throughout with the longer CS4-4 rivets used for the longerons. 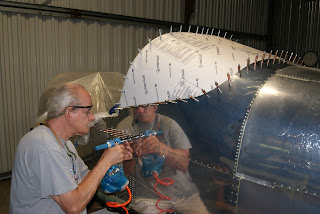 Using the pneumatic rivet puller to rivet the left F-1277 turtle deck skin onto the longeron using a CS4-4 rivet.

Oh, a point for all RV-12 builders to remember … when riveting the F-1254 support frames onto the F-1234 canopy decks make sure the outer rivet (the one going into the longeron) is the longer LP4-4 pop rivet and NOT the typical LP4-3 rivet … this is called for in the plans on a drawing, but very easy to miss. 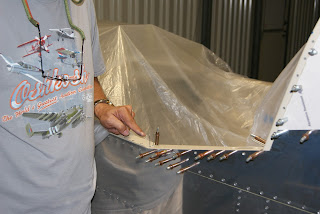 Of the six rivets securing each F-1254 support frame the outermost rivet (one my finger is point to) that goes through the F-1234 canopy deck and into the longeron needs to be the longer LP4-4 pop rivet. 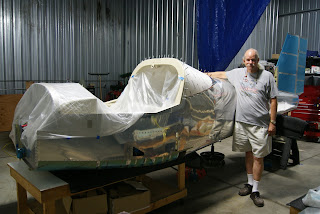 Completed riveting of the F-1277 turtle deck skins and F-1254 support frames … beginning to look more and more like an airplane every day.
Posted by John at 8:43 AM