Due to commitments, only had a couple of hours to spend at the hangar yesterday … but the time, although short, was productive. The original plan was to prime, but due to time restraints decided to remove the aft window and final drill the previously drilled holes in the roll bar assembly. The plans instruct the builder to final drill the holes to #36 then tap the holes. Because the holes were to receive threads, the digital micrometer was used to verify the #36 drill bit was the correct size. Once that was verified, the protective plastic sheet was rearranged to catch the metal shavings and the previously drilled #40 holes in the roll bar assembly were enlarged using the #36 drill bit. 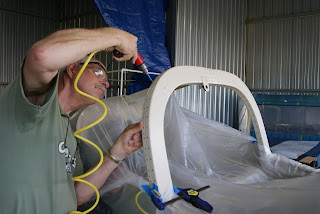 Enlarging the previously drilled holes in the roll bar assembly to #36.

Because the aft window will be screwed onto the roll bar assembly, after all the holes in the roll bar assembly are final drilled to #36, the plans instruct the builder to tap all the roll bar holes to a 6-32 thread. I decided to not use the traditional “T” tap handle to turn the tap and opted for the more controllable “screw driver” type of handle. I feel there is much less of a chance of breaking the tap because the finger tips can easily sense the applied pressure. When it gets a little tight it is time to back off a quarter turn or so then resume tapping. 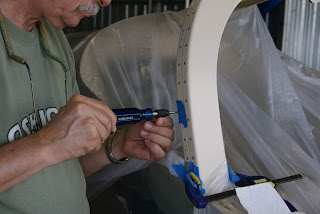 Using the screwdriver style tap driver handle outfitted with a 6-32 tap to create 6-32 threads in the #36 holes in the roll bar assembly.

Prior to tapping each hole, liquid BoeLube was placed on the tap to make the process go easier. When cutting threads, lubrication is important. After the tap was removed the cutting edges were gently cleaned with a brass wire brush to clean off all the aluminum burrs and ready the tap for more BoeLube for the next hole. 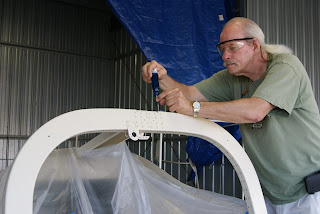 Halfway done threading the holes and on the home stretch.

Once the tapping was completed, there was still just enough time to break out the Dremel and outfit it with a sanding drum to enlarge the radius of the U-00006B splice strips marked during the previous work session. In just a few minutes, both parts were finished and are now also ready for priming.
Posted by John at 7:34 AM