After discovering the right rudder cable was installed incorrectly and correcting that issue (only to discover the newly fabricated F-1285 rudder cable links on the right side were now too short) in an effort to salvage the day and make some forward progress, work shifted to installing the F-1247A forward stabilator cables. The first cable was fed forward from the center channel and pulled into position on the control column … easy now that there was not a rudder cable in its center channel bulkhead holes.

I was thinking “progress, finally” and feeling good, until the check every detail side of me kicked in. I was curious as to how the stabilator cable passed the rudder cable so I broke out the trusty inspection mirror and discovered the cable seemed to cross on the wrong side of the rudder cable (which ultimately was correct).  Unfortunately, there is no detailed drawing of the forward center channel area showing the interaction between the cables just forward of the F-1204A center channel bulkhead to definitely know if the lower stabilator cable is supposed to pass on top of or underneath the rudder cable at that point. So I may have a non issue that I think is an issue.

Giving full disclosure, Van’s does say to run the cable from the control column aft … but that would involve leaning WAY in the cockpit with one hand through the small lightening hole in the seat rib and supporting the cable with finger tips while using the other hand to push the cable aft taking stabs in the dark trying to locate hole in the bulkhead. That did not seem appealing to me … but by feeding the cable in from the center channel side of the bulkhead, I just may be creating the perceived problem ... (which was ultimately was not a problem).

I though perhaps it takes care of its self if the cables are under tension, so I tensioned the right rudder cable and then placed clamps on both ends of the F-1247A stabilator cable to keep it under tension. Apparently, the angle of the mirror makes it look like an issue but it is not. 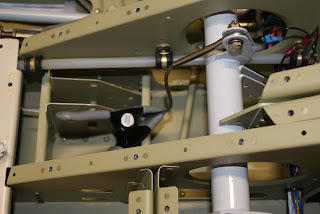 A clamp was used at the center channel and here at the forward end of the F-1247A stabilator cable to keep it taut. Still looked like the cables crossed poorly.

By this time, the day was going so miserably that I was about to throw in the towel, do some research and come back later … then an idea presented itself.  In theory, the stabilator cables pass through all the bulkheads in a straight line from the pulley assembly aft … so I should be able to run a straight pipe through all the holes and establish a straight line for the stabilator cables. I ended up using a piece of aluminum fuel line and fed it in from the tailcone through all the bulkheads and up to where the pulley assembly will be installed. 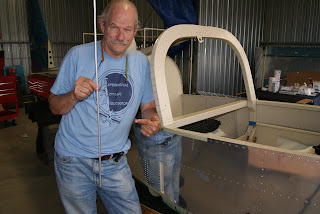 The piece of aluminum tubing that was fed in from the tailcone forward through all the bulkheads to the area where the pulley assembly will be installed ... this saved the day.

The threaded end of the F-1247A forward stabilator cable was inserted into the tubing until it bottomed out on the thicker portion of the fitting. Then the cable was pushed aft thus sliding the tubing backwards through all the bulkheads and of course taking the cable in a straight line along with it. This idea worked great and was ultimately used to install both F-1247A forward stabilator cables … the F-1247A cables are now, with out a doubt, following the correct straight line path. Perceived problem solved, time to move on. 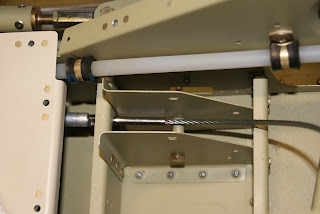 After both F-1247A stabilator cables were correctly routed aft, the cables were attached onto the control column and then the pulley assembly was installed. 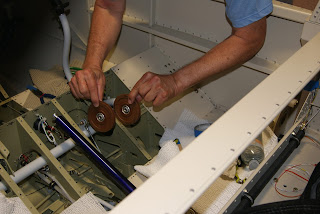 The two pulleys in my hands are installed side by side and on top of the two F-1247A forward stabilator cables. A bolt is placed through the center of them completing the instillation. 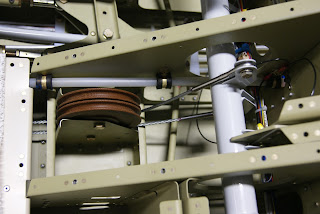 Completed instillation of the forward portion of the F-1247A forward stabilator cables and associated pulleys.
Posted by John at 7:11 AM