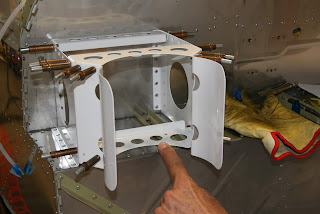 My finger is pointing to the retrofit for Service Bulliten 13-04-05 that consists of adding F-1201G-Mod which is an undrilled F-1201G brace that gets match drilled by the builder. Newer RV-12 kits will have mounting holes already drilled in the F-1201E oil tank side brackets and will include two F-1201G braces one flipped upside down and mounted lower and one mounted on top of the oil tank bracket assembly. 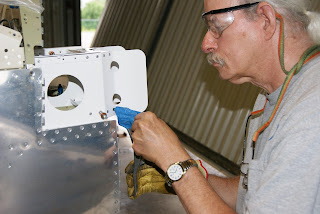 Riveting the additional F-1201G-Mod brace onto the right F-1201E oil tank side bracket.

The riveting of the two F-1201G braces and left F-1201Q battery mount was, for the most part, a piece of cake. 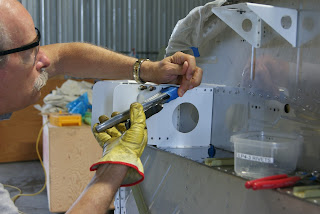 However, the party ended when attempting to rivet the aft rivet in the right F-1201Q battery mount. It looks like there would be plenty of room, but even the close quarter rivet puller just could not quite get onto the rivet correctly … mostly because the side skin was in the way. I tried two other rivet pullers with swivel heads and they would not even come close to working. Hand rivet pullers with a long nose may not have an issue, but I did not have one so had to improvise. Trying to bend the rivet mandrel and use an AEX wedge still did not help as the nose of the rivet puller was shy of touching the rivet head by about 1/4" or so. Then I came up with an idea that worked for the rivet puller I had … slide a small piece of aluminum tubing onto the rivet mandrel to take up the gap. 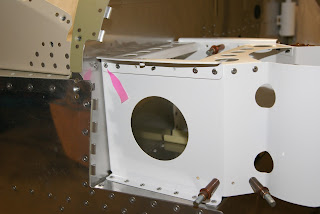 The pink arrow is pointing to the problem rivet. 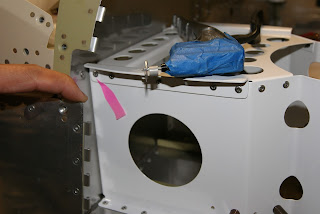 By finger is touching the side skin that is in the way along with the green primed strip of aluminum extending down from the nutplate by my finger. The solution was to use a tiny piece of aluminum tubing to take up the gap between the nose of the rivet puller and the AEX wedge … also seen in the photo. 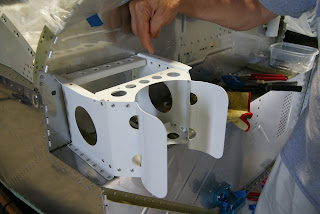 The finished oil tank side bracket assembly/battery box. Builders take note … the three rivet holes adjacent to the slot where the battery slides into (pointed to by my finger) need to receive flush rivets on both the left and right side of the assembly.

Today the correct AD-42H rivets arrived for completing the assembly of the trim pushrod assembly. These are unique rivets and my suggestion for builders setting these rivets is to use a hand rivet puller to slowly set these rivets. Van’s correctly instructs the builder to push down while setting these rivets but leaves out an important tip that will insure perfect results …. Before setting the rivets in the pushrod assembly, REMOVE BOTH the front and back Clecos. The photo below shows that having a Cleco installed on the opposite side will leave the rivet very proud and you will not be able to push it down far enough to get a perfect result. This is because these unique rivets expand on BOTH sides of the rivet hole. 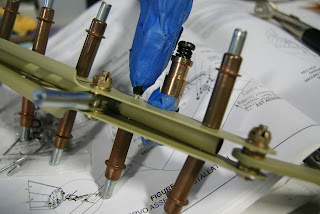 Removing the Cleco on the opposite side will allow this rivet to sit flush prior to setting the rivet.

When you really need to push down, as Van’s correctly suggests, is when setting a rivet opposite of a rivet that has already been set. This is because a rivet placed into a rivet hole opposite a set rivet will hit the set rivet and sit proud … but only by about 1/32" or so. This is easily managed by pressing down on the rivet while slowly drawing up the mandrel with a hand rivet puller. The body of the rivet will settle flush with the metal then almost immediately the head will begin to expand as the rivet begins to set. Weird rivets to be sure … in addition to the outside factory head of the rivet expanding, the body of the rivet inside the tube takes somewhat of a barrel shape. 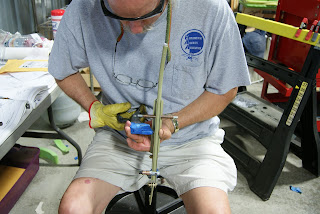 Using the hand rivet puller to set an AD-42H rivet into the trim servo’s pushrod assembly. 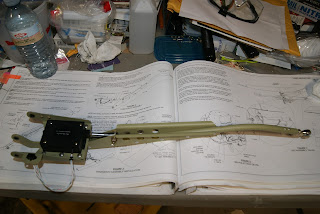 I was about to install the assembly onto the tail cone but remembered the two spacers made a couple of days ago still need to be primed along with some of the pieces for the wheel pants, of which a couple will be needed very soon during instillation of landing gear … so will need to have an airbrush primer session in the very near future.
Posted by John at 9:53 PM