The replacement F-1258 rudder cable links arrived and were separated with a hacksaw, then smoothed up on the grinder. Will hold off on drilling them until the plastic covering the cockpit is removed once the drilling and tapping of the roll bar is completed. The recent rains have brought lower temps with them and I don’t want to play with the aft window until it is warmer so will hold off on that task a while longer.

So moving on, the F-1201R antenna shelf received a couple of nutplates and was then secured to the firewall with Clecos and riveted. (The antenna shelf and soon to be installed oil tank/battery braces have been left off for no particular reason, other than not wanting to snag them while walking around the fuselage). Unfortunately, all the rivets are close to the inside edges of the flanges so the procedure of bending the mandrel of the rivet and using the AEX wedge in conjunction with the close quarter rivet puller was utilized. Sure, it would have been far easier and much faster to install the rivets from the cockpit side of the firewall …but my preference is to have all the manufactured head side of the rivets installed on forward side of the firewall because cleaning will be much easier and there will be a uniform look. This procedure is always tedious and takes more time … especially when not wanting to scratch the powder coating is a factor as well. 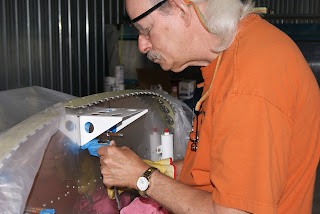 As Bruce Buffer would say “Iiiiiiiiiiiit’s Tiiiiiiiiiiime!!!!” to remove the last grouping of Clecos in rivet holes on the RV-12 that were marked as do not rivet. These rivet holes will be used for mounting the F-1201E oil tank braces and F-1201F battery mount brace. 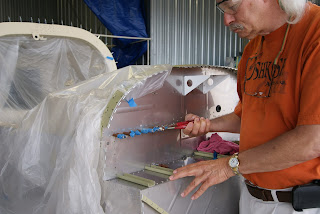 Removing the last grouping of Clecos denoting do not rivet yet because “Iiiiiiiiiiiit’s Tiiiiiiiiiiime!!!!” 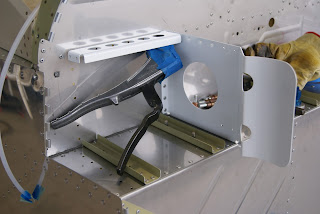 If the angles are set right, there is barely enough room to get the rivet puller onto the heads of the rivets by using two AEX wedges 90 degrees from each other. 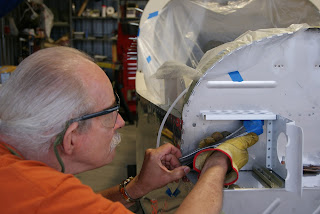 Using the hand rivet puller to set rivets into the F-1201F battery brace. All the rivets needed to have the mandrel bent and two AEX wedges offset 90 degrees were used to get the correct angle for the river puller.

Hindsight being 20/20, should have riveted the right F-1201E oil tank brace first … because the side skin created tight positioning of the rivet puller handles. This would not have been a factor if the right oil tank brace had been riveted first … then the battery brace, but it all worked out OK in the end. 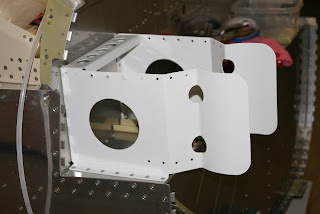 Both F-1201E oil tank braces riveted onto the upper firewall and firewall shelf along with the F-1201F battery brace.

There are still a couple more pieces to place in between the oil tank braces which create an enclosure for the battery, plus there are two angles that will attach onto the sides of the oil tank braces … something to look forward to doing during the next work session.
Posted by John at 7:01 AM