Although not officially “on the gear” the eagle slowly grew legs as the work day progressed. The left gear leg was installed first and working alone made this a much tougher chore than it needed to be because of the need to traverse back and forth between under the belly and working from up above. The main gear uses three sizes of bolts AN4, AN5, and AN6, so a host of sockets and wrenches are required to install the hardware. At one point I had wrenches sitting on blocks of wood to keep them on the bolts while tightening nuts from below. Installing the gear is a task much easier accomplished with the aid of a helper. 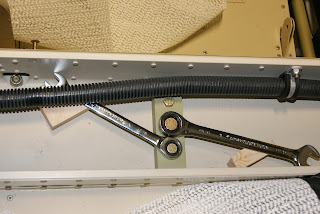 When working by yourself, placing blocks of wood under the wrenches helps keep them in position while tightening the nuts from below. Also note how temporarily removing the Adel clamp for the wire conduit gives easy access to the nut in the top left of the photo. 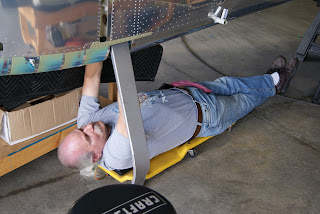 Nope … not sleeping on the job. Installing the U-1203 the gear attach brackets for the left  U-1220 gear leg after placing grease on the mating surfaces per the instructions.

Mike came by just as I was about to begin torquing the hardware for the left gear leg and he was quickly put to work placing wrenches on the nuts and bolts from up above while I torqued the gear hardware from below. 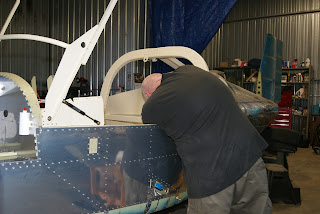 Mike lending assistance by holding wrenches on the landing gear hardware from up above.

One thing we did to allow for better access to the landing gear bolts was to temporarily remove the Adel clamp holding the wire conduit in the center channel. Builders may want to consider not tightening the outer most Adel clamps on each side of the center channel wire conduit until after tightening the landing gear bolts. Work is so much easier when one can see what they are working on.

To gain access to the hole in the bottom skin to install the hardware for the right landing gear, Mike assisted in moving the workbench so it was canted at an angle yet still supported the center channel area. This allowed enough clearance for a hand to get into the access hole in the bottom skin so the gear mounting hardware for the right U-1220 gear leg could be installed. 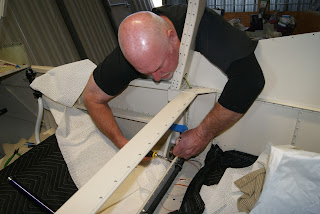 Mike temporarily removing the outermost Adel clamp on the right side to allow for easier access to the landing gear hardware. 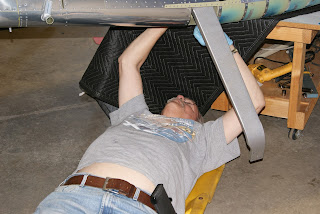 Installing the hardware for mounting the U-1220-R landing gear leg.

Return from the future: As can be seen in the previous photos, the gear legs are not primed. During the mega priming session in the fall the landing gear legs were missed because they were in the bottom of the shipping crate covered with cardboard. This is one of the only parts Van's plans instructs the builder to make sure you prime .... sadly I did not and installed them anyway. I'm now at my first condition inspection and seeing corrosion on the gear legs so felt compelled to remove the gear legs for a soak in Alumiprep 33 to remove the surface corrosion prior to priming. So my tip to fellow builders is make sure the gear legs are primed ... because they sure will corrode fast if not coated.


With both the left and right U-1220 landing gear legs now attached, decided to keep rolling along and install the WD-1201 “shin whacker” nose gear assembly.  (Have not walked into it yet … but we all know, it’s only a matter of time).  The nose gear assembly is installed onto the bottom of the fuselage with thirteen AN3-4 bolts. Later, just prior to the engine instillation, the two mounting holes on the upper portion of the nose gear assembly that touches the lower firewall will be match drilled into the firewall and the holes enlarged. 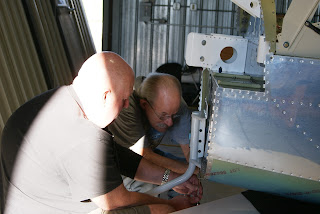 Mike and I installing the thirteen AN3-4 bolts that secure the WD-1201 nose gear assembly onto the belly of the fuselage. 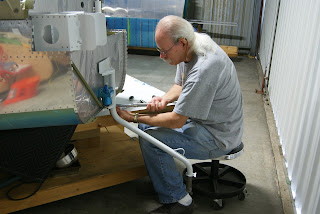 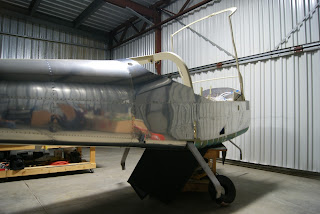 All three of the DOG Aviation’s RV-12 gear legs installed and ready for instillation of the wheels … thanks for all the assistance Mike.