This will be the last post on the DOG Aviation Blog for at least a week. Yes, it is that time of the year again for the annual pilgrimage to to attend the week long AirVenture aviation extravaganza put on by the Experimental Aircraft Association. Today’s work session was short because of last minute chores that needed to be completed prior to leaving town.

Below is a photo of what the back side of the wheel assembly looks  like as received from Matco. The brake plate is wire tied onto the axle and the axle bolt is installed ... keeping the inner and outer bearings in place on the axle, along with the wheel/hub assembly. 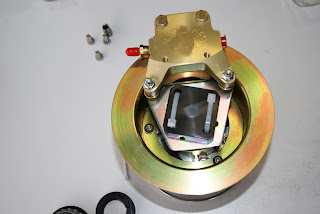 The Matco wheel assembly viewed from behind as shipped from Matco.

After gaining experience yesterday with the Matco wheel and brake assembly for the right landing gear and becoming familiar with the Matco wheel parts, installing the axle today on the left landing gear leg was a snap. From playing around with the wheel and brake components for the right side, a couple of things have been discovered. Basically, there are two options for installing or removing the wheels … but only one of which allows for testing of the landing gear axle alignment. Option one - remove the tire/wheel/hub but leave the brake disc on the axle and between the brake pads. This is accomplished by removing the three Allen screws seen in the photo below and removing the large nut at the end of the axle and pulling the tire/wheel/hub off the axle. The previous post has a photo that shows the brake disc on the axle of the right gear leg illustrating the result of this method. 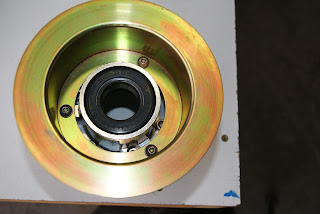 Here is a photo taken from the backside of the wheel. One can see the three Allen screws that attach the brake disc to the wheel/hub assembly. Removing these three screws and the large nut on the end of the axle will allow the tire/wheel/hub to be removed leaving the brake disc behind on the axle.

Option two – (and the one RV-12 builders will want to use during initial assembly), is to remove the two AN4 bolts attaching the brake shoe to the caliper then remove the large nut on the axle. By doing this the brake disc AND tire/wheel/hub assembly will come off the axle as one assembly. This is preferable during initial instillation because a test needs to be performed involving the placement of wooden blocks on the axles and running a string between the left and right gear legs to determine if there is a need to correct for toe in or toe out by using shims. As I discovered, the alignment test using the blocks can not be performed if the brake disc is on the axle ... so I had to remove the brake disc from the right gear leg. 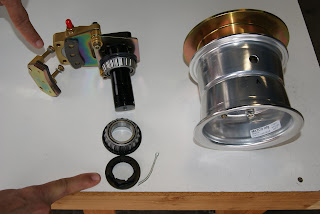 Removing the two AN4 caliper bolts my finger is pointing to along with the nut on the end of the axle my other finger is point to will result in the brake disc being removed with the tire/wheel/hub as can be seen on the right in the photo. Builders will want to do this for the initial instillation.

I hope other builders, like myself, that find Matco’s documentation lacking and appreciate a couple of photos of a process will find the above helpful.

As previously mentioned, installing the axle on the left gear leg is a snap once one becomes familiar with how the parts interact with one another. It seemingly only took a few minutes once the parts were rounded up. Here again the U-00003 bracket from the wheel fairing kit was installed on the inside of the left gear leg and the washers called for in the plans omitted because the U-00003 is being installed now. For more information on the topic, refer to the previous post. 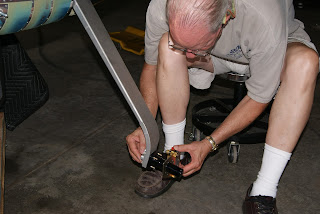 With the U-00003 bracket for the fairing kit in position on the inboard side of the gear leg, the Matco brake plate/caliper assembly is slid over the axle and bolted onto the left gear leg. 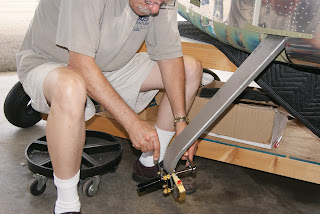 Tightening down the four axle bolts to prepare them for final torquing. 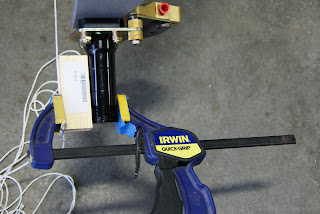 This is looking good … the alignment string is barely touching the wooden block.
Will be holding off on installing the rest of the wheel and brake components until after AirVenture where I hopefully can catch up with Matco representatives and ask some questions addressed in the previous post.﻿
Posted by John at 9:04 PM