Although getting an extremely late start today decided to take advantage of the very  hot hangar and enlarge the holes in the rear window. The DOG Aviation procurement department found Plexiglass drill bits at Avery Tools and decided to purchase a whole set. Plexiglass drill bits are recommended for drilling into the Plexiglass and polycarbonates such as the aft window. The drill bits are very pointed and designed so the cutting edges of the drill bits don’t catch the material (thus not causing cracks) when passing through the back edge of the piece being drilled. 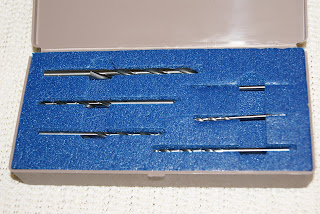 Van’s plans call for using a #27 drill bit and although the kit has one, will be using the slightly larger 5/32" Plexiglass bit. This will allow for a slight bit of wiggle room and also provides room for the window to expand and contract without placing excess stress on the holes. In fact, Van’s support staff has suggested doing this to other builders. So a thin piece of plywood was placed under the window, then the window was clamped onto the plywood and the holes on either side of the clamp were drilled using the 5/32" Plexiglass bit. The idea here was to keep downward pressure on the window while it was being drilled so the back edge of the hole was being supported as best as possible. 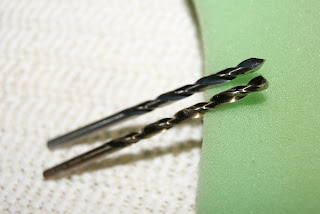 The difference between the 5/32" Plexiglass bit on the top and a regular 5/32" drill bit on the bottom can easily be seen in this photo. 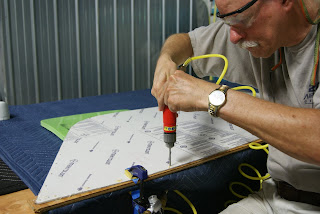 Drilling the screw holes in the RV-12’s aft window using a 5/32" Plexiglass bit.

The aft window had some rough edges on it so used a sanding block to smooth up the edges. Did not totally finish the window because I need some finer grit sandpaper. Plan on going up to 1000 grit so the edges of the window will take on a polished look and this will also mitigate the possibility to stress cracks as well. 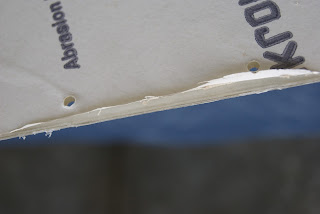 Rough edges on the aft window can be seen here. 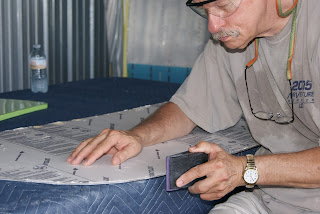 Smoothing the edge of the aft window with a sanding block.

At some point in the future, the plan is to very lightly countersink the edges of all the holes in the aft window using a countersink cage and finish off polishing the edges.
Posted by John at 10:33 PM

Email ThisBlogThis!Share to TwitterShare to FacebookShare to Pinterest
Labels: Fuselage