Yesterday, after remaking the F-1258 links for the right rudder cable, tried to prime the parts that have been prepared the past couple of days … but the weather was not cooperative as it rained most of the afternoon and evening so worked on little things.  However, that all changed this afternoon and was able to get all the parts awaiting primer sprayed. 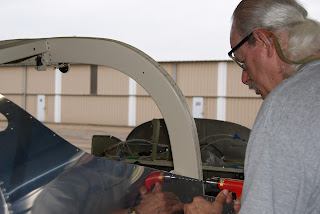 Builder tip: Prior to doing the final instillation of the aft window onto the turtle deck skins, builders should check that the #6 mounting screws fit through the holes in their turtle deck skins. Better to find out now as opposed to finding out after the batch of fuel tank sealant used to seal the window has been mixed.

Looking for more to do instead of watching the primer dry, decided to have a look at the canopy parts. Some items were already taken care of prior to painting the canopy frame. However, there were a couple of tasks that still remained to be completed. One such task involves enlarging the mounting holes in the C-1216 gas struts. 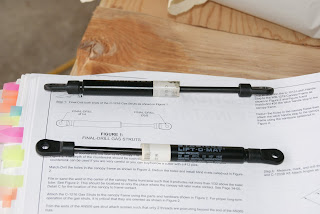 I decided to go ahead and drill both ends of each strut with the 1/4" drill bit first, then final drill the 3/8” mounting holes on strut’s rod. 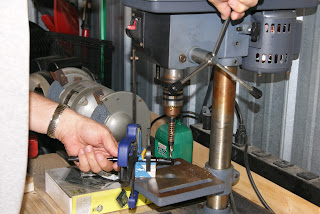 Using the drill press to enlarge the mounting hole on the body of one of the gas struts to 1/4". 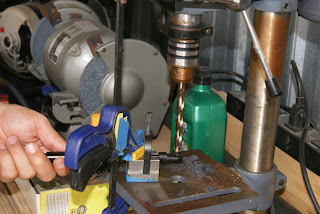 Enlarging the mounting hole on the rod end of the strut to 3/8". 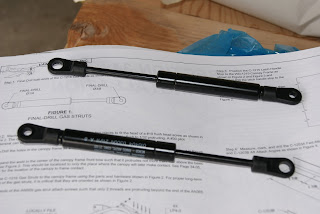 Completed drilling of both ends of the C-1216 gas struts.

Another task to perform on the canopy frame was to match drill to #30 the ten holes in the canopy frame. Some of these holes caused an interference problem with the chuck of the drill, so a 12" drill bit was used. After all 10 holes were drilled and deburred, LP4-3 rivets were placed into the holes. For deburring, a wooden dowel rod was used to scrape the burrs off the inside of the square tubing. If a burr bent and went inside the rivet hole, a rivet was used to push the burr back down to get scrapped away by the wooden dowel rod. 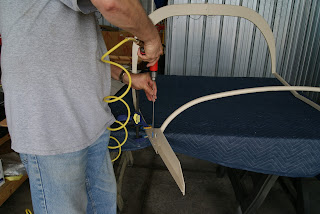 Using a 12" drill bit to drill the canopy frame. 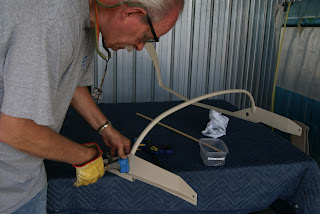 Using the hand rivet puller to set an LP4-3 rivet into one of the newly drilled rivet holes in the canopy frame.

After finishing up placing all ten rivets into the canopy frame, decided to call it quits for the day.