Work was suspended on finishing up the tailcone fairing after the two innermost holes on the left side of the upper and lower tailcone fairings were drilled into the tailcone. Basically, after the two holes are drilled the builder is to install the stabilator and then pivot the tailcone faring to obtain an equal spacing around the stabilator then final drill the remaining holes.  I decided to take a pass on doing that until the rudder cables are installed and the trim servo assembly is installed.

After drilling the two holes in the tailcone fairing, with a warm drill in hand, finally got around to finishing the drilling of the holes in the bottom fuselage skin for the access to the landing gear bolts. After finishing up on that, decided now would be a good time to begin working on the trim servo assembly. The trim servo instillation begins with riveting doublers onto the servo tray. AN470AD4-4 solid rivets were used in place of the standard LP4-3 pop rivets. 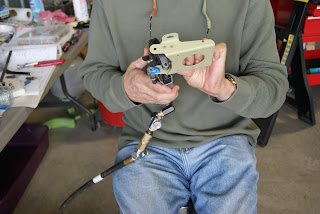 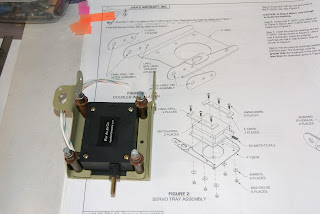 Once the trim servo is mounted in the tray, the tray receives two plastic bushings along with the F-1287 link. All three of these bushings are to be filed down to the point they are just barely protruding the metal. 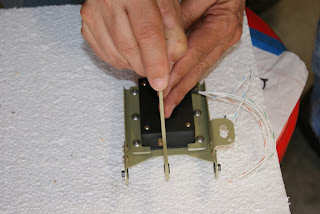 The bushing in the F-1287 link has been filed down … the two bushings in the servo tray will both need to be filed down the same way.

Once finished with filing the bushings down, work on the pushrod assembly was begun. The pushrod assembly requires the associated hardware be installed prior to match drilling. The F-1287E pushrod has four holes in it which the F-1287D clevis plates are to be Clecoed. The associated hardware also needs to be installed to hold the positioning as the remaining eight holes in the clevis plates are drilled into the pushrod. 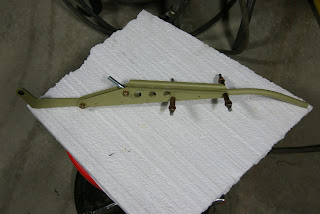 F-1287D clevis plates secured into the F-1287E pushrod with Clecos. The hardware for the pivot points (where the castle nuts are located) is temporarily installed to hold positioning during match drilling of the pushrod.

The next step tomorrow will be drilling and riveting the assembly.
.