While completing the inventory of the RV-12 powerplant kit and looking over the S-1201 spinner, I noticed some cracks. The tip of the spinner is filed with an epoxy resin that once cured has a hole drilled through it … this creats a hole in the center of the tip of the spinner which will receive a bushing. Due to the drilling process, sometimes a crack can appear in the resin and/or the backside can get chunked out where the drill popped through the resin during the drilling process.

I have been holding back on this post until the issue was resolved. After discovering the cracks, a call was placed to Van’s and that conversation reveled some cracking can be acceptable. I was sent a photo of an acceptable crack to compare to the spinner received in the powerplant kit. 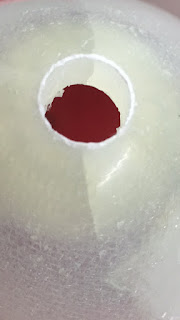 Photo of  acceptable cracking in the S-1201 spinner as defined by Van’s.

There were multiple cracks in the spinner I received, plus quite a bit of chunking out of the resin on the inside of the spinner. Most troubling to me were the cracks running between cracks … which suggests to me, no structural integrity.

I would wholeheartedly suggest fellow RV-12 builders check the resin at the tip of the spinner and make sure it is not fractured like mine is.  Below are a few photos of the S-1201 spinner that was received in the powerplant kit. Because there were multiple cracks, there was not a single camera angle that could capture all the fractures. 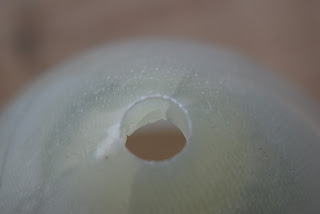 A fracture running between two of the three long cracks. 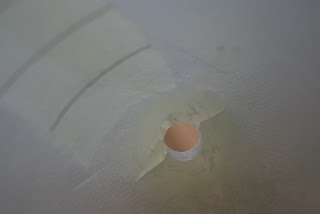 Photo of the inside of the spinner. 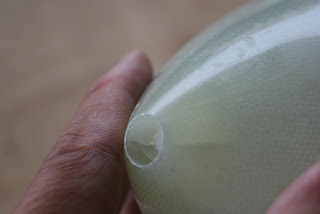 The another long crack can be seen as a shadow through the fiberglass. 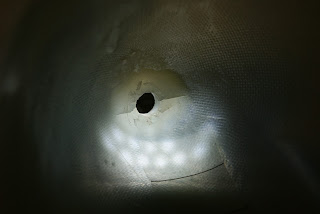 Cracks viewed from inside the S-1201 spinner with backlighting ... the chuncking can be seen as darker shadows around the hole.

After seeing the above photos of the S-1201 spinner received in the RV-12 powerplant kit, Van’s immediately sent out a replacement spinner. Yesterday, that spinner was received and I took a photo of it today. The replacement spinner is nearly perfect no cracks and just a little chipping on the inside where the drill bit went through the resin. 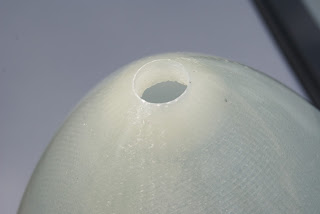 View of the replacement S-1201 spinner from the top. 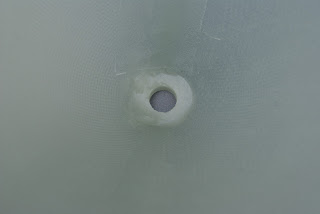 View of the replacement spinner from the inside ... very little chunking.

Now that that issue has been resolved, wish the DOG Aviation RV-12 was at a point in construction where the replacement spinner could be bolted on today … sadly it is not.
Posted by John at 9:01 AM