Continuing on with the rudder cable rigging from the previous work session, the previously marked F-1258 links were removed from the rudder cables and the center point of the hole location marked on the tabs were center punched and drilled. Prior to drilling, a marked F-1258 link was placed on top of an unmarked link and a bolt was placed through the holes to hold alignment. The pair of links were then clamped and drilled out to #12 as a pair. The same procedure was used for the other pair of F-1258 links. 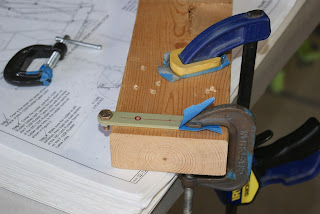 One marked F-1258 link is center punched and placed on top of an unmarked link and the pair is clamped so the holes will be drilled as one. 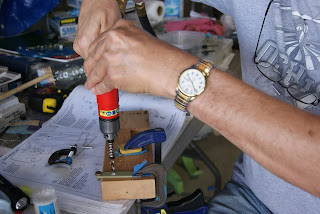 A small lead hole was drilled first, then the hole was stepped up a couple of times …. drilling the hole to a final size of #12.

After drilling, the result is one pair of long F-1258-L links and another pair of short F-1258-R links. The excess metal needs to be removed and the cut end of the link is given a radius … I used the pre-made end of one of the links as a template to draw the curve for the cut. The links are steel, so would suggest using a hack saw and a grinding wheel to make the radius. Out of habit, I almost began using the band saw to make the cuts … then, fortunately, remembered the links are steel, so used a hack saw to make the cuts. Cutting steel on a small band saw will quickly take a toll on the band saw’s blade. 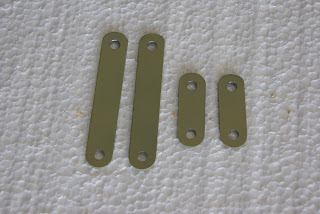 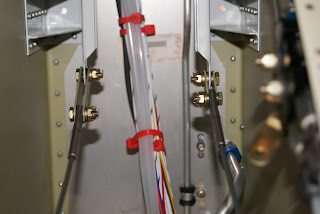 Completed rigging of the forward end of the left and right rudder cables and F-1258 links. 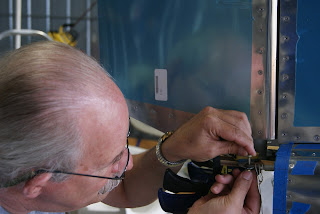 Installing the bolt and one of the washers that go above and below the rudder horn. 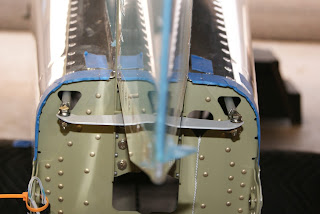 For those with keen eyes … please don’t send Email's about the missing left and unset right cotter pins on the rudder cable’s mounting hardware. I just had to leave the hangar to attend festivities and could not stay a moment longer. Will install the cotter pins first thing during the next work session.
Posted by John at 10:47 PM