One of the nice features about the Tosten CS-8 control stick grips installed on the DOG Aviation RV-12 is that in addition to just one button to key the radio’s transmitter, there is also an abundance of switches available to control other functions.


Frequency swap (this will toggle the stand-by and active frequencies).
User frequency cycle (ability to cycle through a list of up to 20 user stored com frequencies).


Either of the discrete inputs can be programed to control the above functions, so it is the builder’s choice. That said, the current plan is to wire one of the Tosten grip’s switches to create a frequency swap button wired to the DISC1 input on pin 2 and use a second switch to control the DISC2 input on pin 22 for cycling through the database of user stored com frequencies.


At first sight, the massive connector on the back of the GTR 200 looks intimidating … but it is not. Two Philips screws secure the connector onto the radio’s mounting frame and once removed, the connector is in your hand. There is a flat metal plate secured with two screws covering the wiring … when removed, it reveals the wires entering backside of the connector. 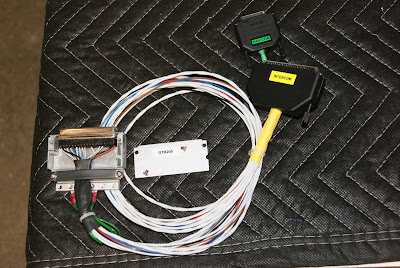 Wiring harness/connector for the Garmin GTR 200 radio after removal from the radio’s mounting tray. The two cover screws have been removed along with the cover and the connector is now ready for inserting the two wires from the switches on the Tosten grips. One wire will be inserted into pin 2 to control discrete input DISC1 and a second wire will go to pin 22 to control discrete input DISC2.


It was a little bit of a fight trying to insert the two wires from the switches on the Tosten grips under the heat shrink covering the wires entering the Garmin GTR 200’s connector. There are quite a few heat shrink splices for the grounding of all the shielded cables that seemingly get in the way no matter there the wires are inserted. It took quite a bit of time before both wires were inserted under heat shrink, but it can be done. This is one of those tasks where the builder needs to try a few times at various locations, roll the heat shrink around in your fingers a little to rearrange the wires a little and try again … so patience is a virtue. 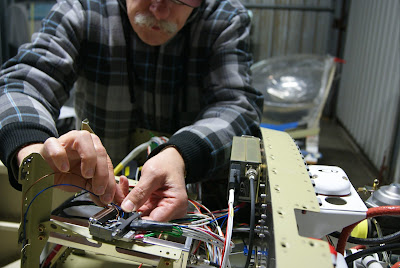 Making measurements on where to cut the wires to add the female connector pins.

The connector pins were installed on the ends of the wires, the brown wire was inserted into the DISC1 input (pin 2) and the blue wire was inserted into the DISC2 input (pin 22). Now that the two discrete inputs on the back of the Garmin GTR 200 radio’s connector are wired to switches on the Tosten CS-8 control grips, a couple of more steps will be required to make it all work. This will need to wait until it is time to power up the avionics. For those interested, section 3.6.4.5 of the Garmin GTR 200 Instillation Manual shows how to use the radio’s internal setup menus to enable the discreet inputs and assign their functions.  Next, referring to the Garmin GTR 200 Pilot’s Guide manual page 5 begins the tutorial on how to save com frequencies to the user com frequency database … this database can store up to 20 com frequencies that can now be cycled through using one of the stitches on the Tosten grips. At this point in time, the menu setup to make this all work will have to wait until the radio is installed and the RV-12’s electrical system is ready to be powered up.
Posted by John at 10:15 AM