Those that have been following the DOG Aviation blog know installing panel mounted switches for the fuel pump and left landing light has been in the works. Wanted to have nice labels made for the switches as opposed to using a Dymo style stick-on label. Decided to use the same style of label material Pete used in his gorgeous RV-9A (www.myrv9.com) which is a two color layered plastic .020 thick that when engraved exposes the color below …. flat black with white underneath was chosen.


The goal was to have the engraver cut the rectangular slots for the panel switches into the label material so the two switches could be installed onto it. This required the need to create a scaled detailed drawing for the engraver, but I did not have software in the new home computer I trusted to get the scaling correct. Mike K.’s wife Kim came to my aid and helped me create a scaled drawing using her sewing machine software …. yep, that is right, sewing machine software. Once I had a scaled drawing to work from that had the correct switch positioning and scaling, I was able to modify it for engraver.  Thanks to Kim, I was able to obtain the correct scaling for the switches.


One of the down sides of the sewing software is that lines are thick because they represent stiches, but that was easy to fix using picture editing software at home. Once the drawing was converted to a single line a font was chosen that is a close match to the font on the ignition switch module. This was taken to the engraver who understood what I was trying to achieve and did an outstanding job of creating the label for the two panel switches. A special thanks to the employees of Engravers Edge for creating exactly what I was looking for. 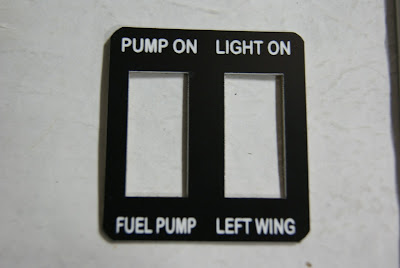 The label for the two panel mounted switches that will be installed above the ignition switch module.

Even though the bezel on the two switches will keep the label in place, the decision was made to place a really sticky tape on the backside of the label … so the label needed to be installed correctly the first attempt. To aid in the alignment of the label while sticking it in place onto the instrument panel, the two switches were inserted from the back side of the panel so they could be used as alignment guides. Because the plastic for the label is a two color plastic the sides show as white so a black permanent marker was rubbed along the edges to blacken them prior to installing the label onto the instrument panel. 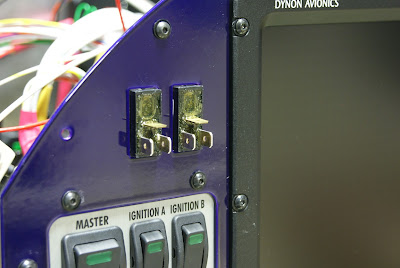 The two switches were inserted from behind the panel and used as an alignment guide for positioning the engraved label. 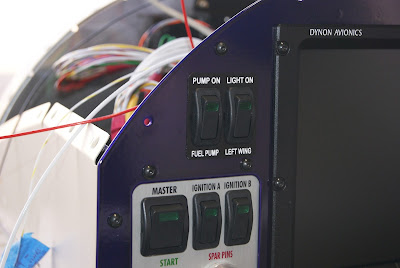 Fuel pump and left landing light switches installed along with the engraved label.

For those fellow builders that are interested in the switches being used, they are the same type used by Van’s in the Fuse and Switch module. The switches are manufactured by Otto and are from the K1 series. Otto manufactures a plethora of switches in this series with long part numbers and each letter in the number means something like momentary on, or steady on, terminal style, LED or no LED, LED voltage rating, color of LED lens, etc. The part number for the Otto switch in the K1 series that has off to steady on operation, with a 12 volt LED and green lens is:  K1ABAPCABA. 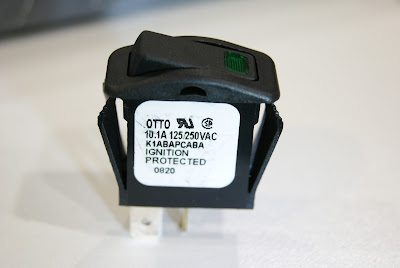 The Otto K1ABAPCABA rocker switch is from the same family as the switches Van’s uses in the Fuse & Switch module.


Below is a diagram I made of the back of the switch and a schematic of the internals. 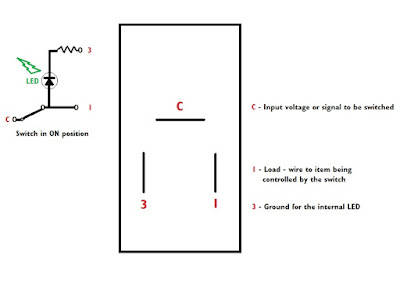 Drawing of the back of the Otto rocker switch and internal schematic.


Wiring of the switch is straight forward. Using the wiring for the fuel pump as an example the “C” terminal is the voltage source to the switch … the power comes from pin 29 of the fuselage connector which would normally go directly back to the fuel pump. Terminal 1 goes to the load … in my case the wire to the fuel pump. Terminal 3 is the ground for the internal LED in the switch which can be wired directly to ground … or, as I have done, wired so the LED can be dimed for night flying by using the Cockpit Lights – wire from pin 18 of the Options connector. The SkyView controls the lighting level by using a varying resistance on the ground wire for the panel and  cockpit lighting, so I intercepted the Cockpit Light – lead and ran it to terminal 3 on the two panel switches, then on aft to the cockpit light. 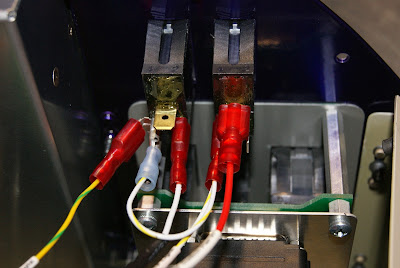 The white/yellow wire comes from pin 18 of the Options connector which is the Cockpit Light – wire and is connected to terminal 3 (LED ground) of both switches. The yellow/green wire is the wire that continues aft to the cockpit light mounted on the roll bar and will supply the ground for the cockpit light. Of note, the fuel pump switch is on the right and the left landing light switch is on the left.


As can be seen in the above photo, most of the wiring for the switches completed during the work session except for two wires. All that is left to do is connect the wire to the fuel pump and connect the power for the landing light after adding a fuse to the circuit.  Had it not been for spending a huge chunk of time searching for the .092 Molex connector pins (mentioned in the previous post) during the afternoon the switch wiring would be completed.