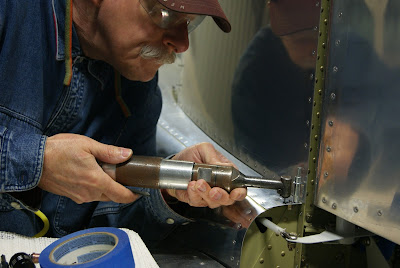 This portion of the tail cone’s skin is flat, so drilled the nutplate holes from the outside using the angle drill outfitted with a #40 drill bit.


After all the rivet holes for the nutplates were drilled, they need to be marked for positioning then removed for deburring and dimpling … this was done one nutplate at a time so labels did not need to be made. Marks were placed on one of the nutplate's rivet holes in the tail cone's skin and the corresponding rivet hole on the nutplate to identify positioning for reassembly. I quickly ran into issues when attempting to dimple the nutplate rivet holes closest to the vertical stabilizer … the pneumatic squeezer could not get onto the rivet because the squeezer’s yoke interfered with the rudder’s horn. I tried a couple of different yokes to no avail and a hand squeezer …. shy of removing the rudder (not an option), nothing seemed to work. After a little brainstorming, came up with the idea to set the dimples using a C clamp. 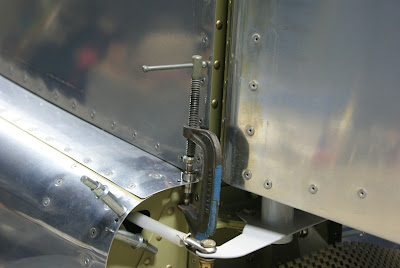 Because there was not enough clearance to use the pneumatic squeezer for setting the dimple in the nutplate rivet hole closest to the vertical stabilizer, opted to use a C clamp to compress the dimple dies together. Although a little scary, took it slow and this method ended up working out quite well. 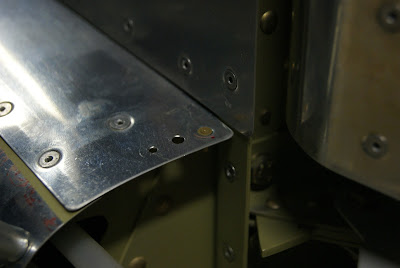 After using the C clamp to squeeze the dimple dies together, the dimple was checked with a rivet … this rivet is sitting flush with the skin … time to move on. The red marking denotes nutplate positioning for reassembly.


Working from the top down, the nutplate rivet holes in the tail cone were dimpled along with the corresponding nutplates. All was going well until reaching the lowest rivet hole closest to the stabilator. Even with the pneumatic squeezer sitting on the skin of the stabilator, there was not enough room to get the dimple dies close to being squared up … so resorted to using the C clamp again to make the dimple. 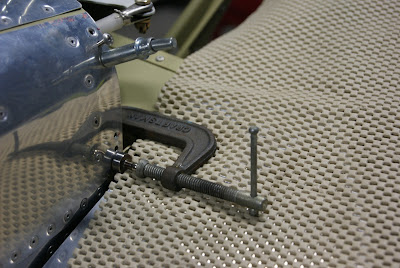 The C clamp was once again enlisted to create a dimple … this time for the nutplate rivet hole closest to the stabilator.


Did not have the time to finish off all the dimpling so will finish that off during the next work session. I can see now riveting the nutplates onto the tail cone skins at the tight spots may present a challenge … sure all the tail feathers could be removed to allow for unobstructed access, but would prefer not going that route if I can find other methods that work.
Posted by John at 6:05 AM