Got to the hangar yesterday in great spirits and left disgusted and in total despair. The only good thing that got accomplished was mounting of the ACK E-04 ELT’s remote control panel indicator onto the left instrument panel section with #4 black screws that the DOG Aviation procurement department ordered. 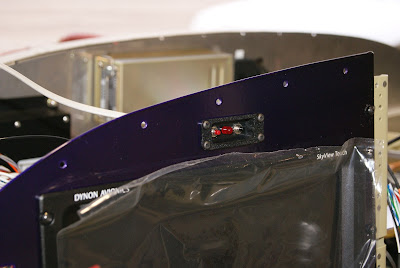 
From this point on it was a downward spiral, seemingly every task I wanted to work on required something else to be completed first. Can’t mount the additional two panel switches for the fuel pump & left landing light because of waiting for labels (which will be placed under the switches) to get engraved. Can’t mount the right instrument panel because of waiting for longer screws to mount the altimeter. Can’t finish off mounting the ADSB module because the center panel is still not here so the airspeed indicator can’t get mounted so accurate clearance measurements can be made … it is going to be tight so the mounting method for the ADS-B module may need to be tweaked and would like to finalize that ASAP.


With not much else to do, wiring wise, it got me thinking about mounting the com antenna ...  so the com antenna was pulled out of the box and instructions perused noting the mounting instructions indicated the antenna should be mounted on clean bare metal. So got under the fuselage, reached in through the inspection cover and used some 150 grit sandpaper and Acetone to remove the Akzo primer. Builders may want to consider not priming this area because it can only be reached from one side and there is a stiffener in the way to contend with so sanding away the primer was a little bit of a chore … hind sight is 20/20. After checking with an inspection mirror to verify removal of the primer was successful, thought it would be a good idea to check the continuity of the coax cable from the connector on the Garmin GTR 200 radio’s mounting frame to the end of the cable.


This is where the afternoon turned into a day of despair, frustration and self-loathing. In the following photo one can see the end of the coax cable is a little too short at the instrument panel end of the cable to be attached onto the connector … it needs to be at least a couple of inches longer. 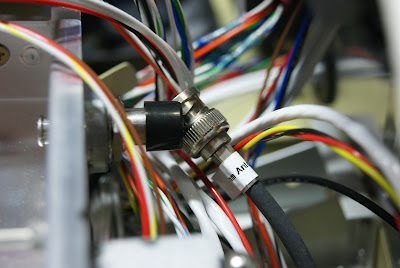 
The only good news is there is plenty of cable slack at the other end of the cable in the center section to pull a few inches back. The bad news this is a HUGE setback because to correct the issue, it will require a major disassembly of parts just to gain access to the coax cable. 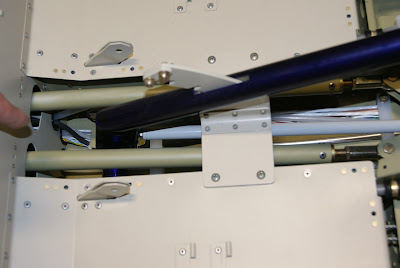 On the left, my finger is pointing to where the black com radio coax comes out of the upper grommet in the center section and makes the tight bend down to go under the cable shoe attached to the flap handle mounting block. With that tight of a bend, there is no way to pull the cable forward without removing the flap handle/mounting blocks and the two push tubes.


Discovering the coax cable is too short is a HUGE setback because it will require a lot of disassembling and removing of parts in the center tunnel just to be able to get fingers around the coax cable. Both F-1265 push rods need to be removed so the entire flap handle/ mounting block assembly can be removed just to get the cable shoe out of the way. Will also likely need to remove the flaperon mixer assembly and of course cut most, if not all, of wire ties to free up the coax enough that it can be moved forward to the instrument panel the few necessary inches. This will be a problem left to be solved when it warms up a bit more so a T shirt can be worn while doing the work because a large amount of time will be spent crawling around inside the cockpit to correct this major faux pas.


There are bands on the cables and harnesses to denote where to position the wires at the grommets in the instrument panel base … so the band on my cable was either placed on it incorrectly or it moved while other cables were being installed. I sure wish Van’s would include measurements in their plans in addition to the bands on the cables … which tend to snag on the grommets and move easily.


This was one of those days where I packed up and left the hangar early in disgust.


Return from the future: Following a suggestion from friend Mike, decided to try using a 90 degree BNC connector instead of digging into the center tunnel to gain access to the com coax to move it forward a few inches. Mike correctly pointed out lots of airplanes use 90 degree fittings behind the radio, including his. The loss of a 90 degree BNC connector is approximately .2dB so in the grand scheme of things that is minimal. 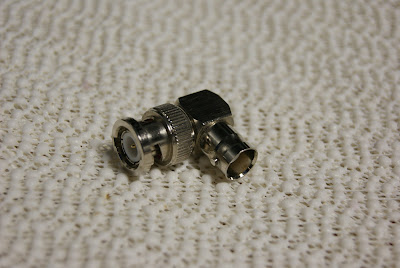 The 90 degree BNC connector procured at a local FBO. 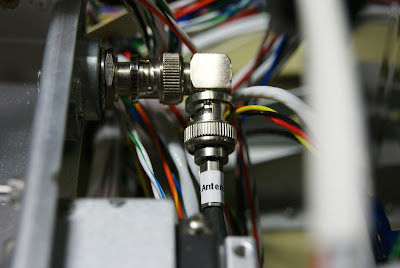