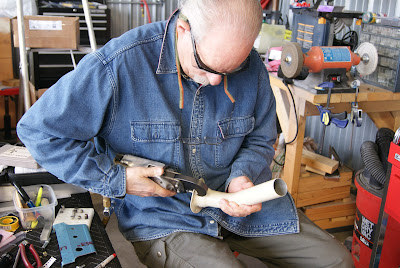 
The instrument panel’s center section finally returned from powder coating … but prior to installing any of the instruments, it was necessary to remove the powder coating from the inside of all the cutouts and holes. The AP and Knobs panels would not fit in the cutouts nor would the screws go through the holes …. So a lot of time was spent using jeweler’s files to remove the powder coating. By the time the powder coating was removed, there was only enough time left to install the AP & Knobs Panels modules. One thing I did NOT do was install the nutplates that would normally be used to install both modules. By not doing so it saved me a little room, clearance wise, mostly at the top edge of the center panel … however, by doing this it required the use of the smaller MS21042-06 lock nuts which fit well (barely). The main reason for using MS21042-06 nuts is because the AP & Knobs panel modules were offset to the left from their normal center mounting to make room for the backup airspeed indicator. By doing so, it placed the modules more into the curve of the panel, so it would have been necessary to grind a little material away from the ears on the nutplates to clear the upper forward fuselage skin when it gets installed. Rather than fuss around doing a bunch of custom fitting of nutplates, using the MS21042-06 locknuts in lieu of nutplates was a no hassle solution. 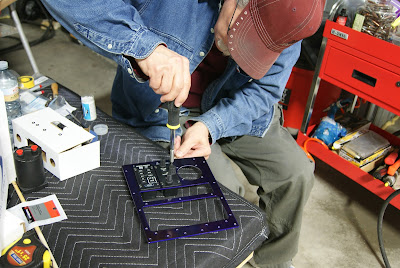 Both the AP Panel & Knobs Panel modules are now installed in the center panel … tightening the last screw while holding the MS21042-06 locknut with a 3/16 wrench.

Did not quite have the time to mount the backup airspeed indicator but will do that first thing during the next work session. Unfortunately, I forgot to take a photo of the backside showing the mounting hardware …. Will try to remember to do that and post the photo here later.
Posted by John at 8:12 PM