Today was an under the belly day by way of spending the better part of the afternoon on my back using Mike’s Jeepers Creeper to finish off instillation of the brake lines and installing the RAMI AV-17 com antenna. This is a job I had been putting off for warmer temperatures which we had a little of today.


The first task that seemingly took an eternity to complete was placing a wire tie around the two poly brake lines  that pass between the flaperon push tubes and securing them to the F-1204D center channel bulkhead between the two push tubes. I found this task quite challenging, it would have been easier if another person were helping from the other side of the bulkhead … but I was by myself. The challenge revolves around trying to wrap a 4” wire tie around the area between the two holes in the F-1204D bulkhead that the flaperon push tubes pass through … while at the same time capturing both brake lines and feeding the lose end of the tie wrap into the latch on the wire tie with pretty much one hand and a finger. You can see the area easily enough, but getting both hands there is another story. After a bunch of failed attempts, I finally got the wire tie latched only to discover I had missed one of the brake lines … another failed attempt.  My procedure clearly was not working well ...  so after a little brainstorming, came up with using a long hemostat to help feed the wire tie into the wire tie's latch. Ultimately this worked great, wish I had thought of it earlier. 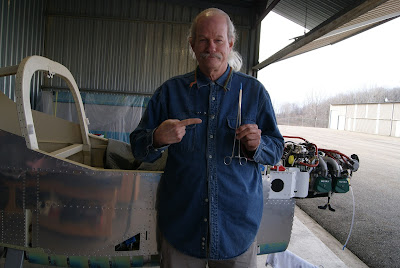 This long hemostat saved the day … after the wire tie was passed though the opening in the bulkhead the hemostat was placed on the end of the wire tie so it could be directed into the latch. 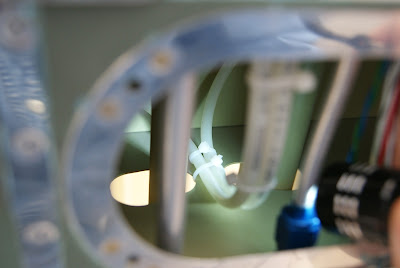 Both brake lines tied together and secured to the F-1204D center channel bulkhead.


After the brake lines were secured to the F-1204D bulkhead, the fittings on the ends of the poly brake line were screwed into the fittings on the U-1203 gear attach brackets and torqued. Torqueing was another challenge but was finally able to find the right combination of crows foot and extensions to get the job done. 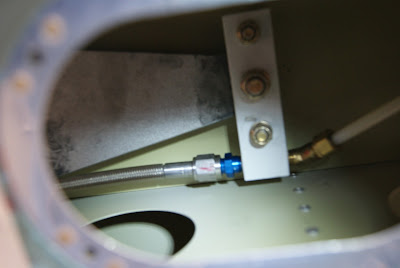 Brake line firings for the right brake that attach to the U-1203 installed and torqued.


The brake lines from the fitting on the U-1203 to each wheel cylinder is not going to be the standard Van’s supplied poly brake line … they will be the vinyl coated stainless braided Teflon hose from Aircraft Specialty. After both hoses were set in place, the hose fittings were torqued. 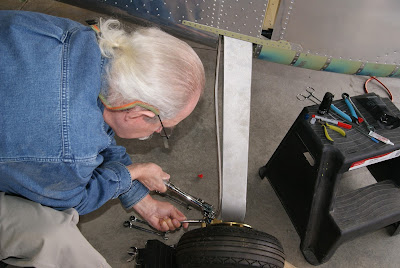 
Upon finishing with the instillation of both the Aircraft Specialty brake lines, decided to continue working under the belly of the beast and sanded a little more primer away from the area where the R. A. Miller Industries AV-17 com antenna will mount then cleaned the area with Acetone. The reason for removing the primer is that even though the plans don't call for the doubler plate that comes with the antenna to be installed ... I opted to do so in the hopes of providing a better ground plane for the antenna. Mounting of the com antenna went fairly smooth after the first screw was installed but getting that first screw started and the tiny lock washers in place is a little bit of a challenge. 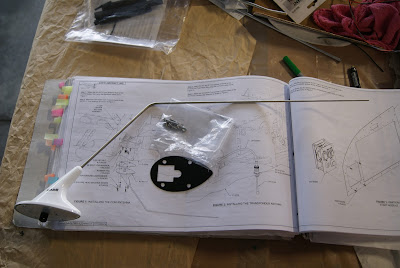 
Since I had more than enough cable slack (still need to pull a few inches forward) I chose pull the antenna's coax cable through the hole in the bottom skin and place the rubber gasket onto the base of the antenna, attach the coax to the antenna and position the antenna on the belly of the RV-12. The antenna is mounted with four countersunk Philips screws and four tapered star washers on the outside and four lock washers and nuts on the inside the bottom skin. 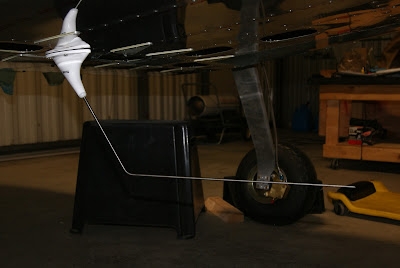 The RAMI AV-17 com antenna installed on the belly of the DOG Aviation RV-12.


Now all that is left to complete the braking system is add brake fluid and bleed the air out of the brake lines ... which hopefully can be done in one step using either a hand pump or pressurized vessel to force fluid from the wheel cylinders up to the reservoir. This method seems to work well for RV's in general. The other item left to do is instillation of the pull cable for the parking brake.