Yesterday was a quite an uplifting day, warm enough to actually have the hangar door open for the first time since last fall and making some major progress on the instrument panel beginning with instillation of the remaining the wiring harnesses. This pretty much finishes up the wiring in the panel area with the exception of connecting five wires to the yet to be installed two panel mounted switches for controlling the electric fuel pump and left landing light. Will hold off installing the switches for the time being because of being in the process of having labels made that will go under the switches … similar to what Pete used on his RV-9A which was a really thin black plastic that when engraved, revealed white lettering. Pete has photos of his panel that can be seen here:  http://www.myrv9.com/Main/Panel.html.


One of the things that became quite evident a while back was that the Adel clamp Van’s has the builder routing all the wiring through is woefully anemic now that the DOG Aviation RV-12 has the Garmin GTR 200 radio and has added ADS-B plus the AP & Knobs Panels not to mention the extra room taken up by the shielded cables that were installed for the landing, navigation and strobe lights wiring. The Van’s supplied MS21919DG16 Adel clamp (1") in the photo below is just too small for all the wiring in the DOG Aviation RV-12. 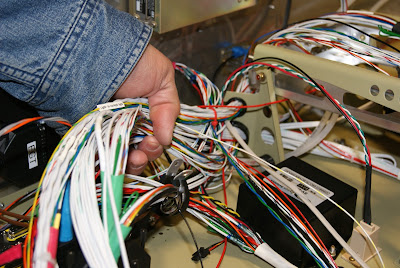 The Adel clamp below my hand has a bunch of wires in it already and the wad of additional wires I’m holding in my hand also need to be passed through the clamp … not happening.


Somewhere in the drawings (may have been the radio instillation section), I read where Van’s said it is OK to increase the size of the Adel clamp if desired … I desired, so when placing an order for some other goodies last week, also decided to up the Adel clamp by two sizes and ordered a MS21919WDG18 (1 1/8") Adel clamp. Interestingly, it was still a little smaller than I would have preferred but all the wires do fit in it … barely. 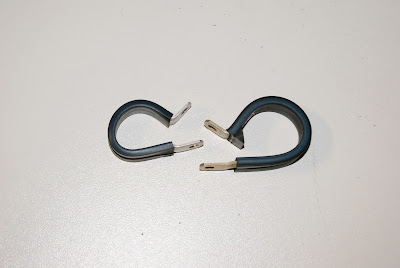 The Adel clamp on the left is the 1" MS21919DG16 Adel clamp the clamp on the right is the larger 1 1/8" MS21919WDG18 Adel clamp … the business I was ordering from only had the wedge style clamp hence the W in the part number.


The plans give the builder the option of adding a nutplate to mount the Adel clamp or use a screw and nut. I decided on using a screw and nut and glad I did, here is why.  The decision was made early on to install all the wirings harnesses first then insert them strategically one at a time into the Adel clamp as opposed to keep screwing and unscrewing the Adel clamp’s mounting hardware as wires were added.


A tip for fellow builders that opt to use a nut and screw to secure the Adel clamp: Because the wires in all the harnesses need to curve down to go through the Adel clamp then back up again it is VERY difficult to populate the Adel clamp without it wanting to raise up to the point it was almost impossible to push it down to the base of the instrument panel. To solve this issue, a temporary screw was placed in the bottom eyelet of the Adel clamp to keep the clamp secured to the instrument panel base using a nut on the underside of the base. This did a good job of keeping the clamp in position while being populated with all the wires. Once populated, prior to removing the temporary screw, wire ties were wrapped around the wires to hold their position so the stuffed Adel clamp could be closed and secured without pinching any of the wiring. The temporary screw was removed and the clamp was secured by inserting a screw up from underneath and placing a washer and locknut on the screw. 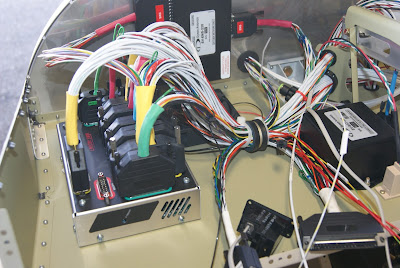 The larger 1 1/8" MS21919WDG18 Adel clamp secured to the bottom of the instrument panel base with all the wiring harnesses passing through it … with all the extra wires and shielded cables, this thing is stuffed. 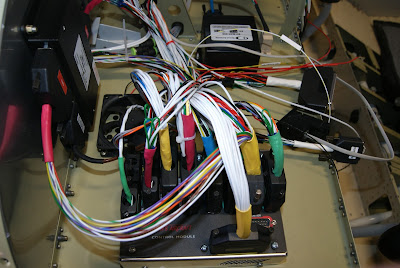 All the wiring harnesses are installed in the AV-50000A Interconnect module except for the ignition switch harness … and that is the next item to be installed.


A deviation will be made from the plans regarding the mounting hardware used to attach the panel sections to the instrument panel and canopy ribs. The plans would have the builder countersink the panel’s mounting holes and use Philips screws to attach the panel pieces. I want a different look so have decided to go with black button hex head screws with black nylon washers under the screws to protect the powder coating. 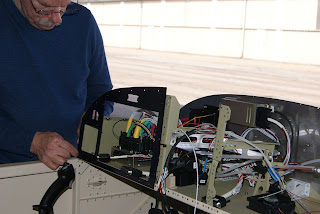 
After getting the F-00060 left panel piece secured in place, the AV-50002 Ignition & Start module was screwed onto the left panel section … once again substituting with the black button head hex screws and black nylon washers. The short wiring harness that connects the Ignition & Start module to the AV-50000A Interconnect module was installed in the last remaining connector completing the populating of the AV-50000A Interconnect module. 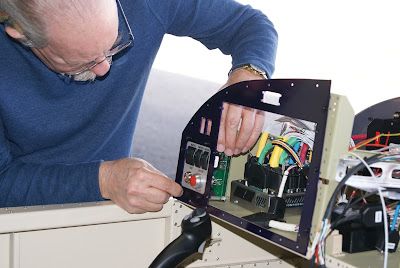 
Next came the installation of the Dynon SkyView D1000T 10” touch screen which attaches to the F-00060 left panel section using 6 screws provided by Dynon found in the bottom of the box along with a 8Gig USB Flash drive and a test cable. Once the SkyView was installed, the 37 pin and 9 pin connectors were installed onto the back of the unit. 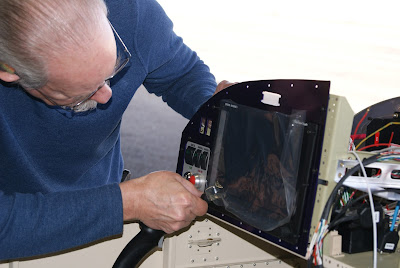 Installing the Dynon SkyView D1000T 10” touch screen onto the F-00060 left instrument panel section. Since I had black washers, placed them under the heads of the six mounting screws for good measure. 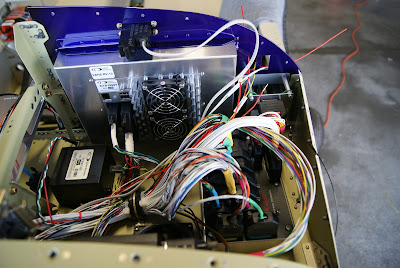 View of the back of the SkyView D1000T with both the BD-9 & DB-37 connectors attached to the unit. 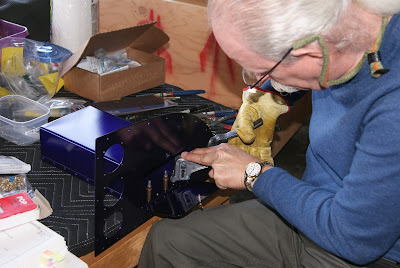 Using the hand rivet puller to rivet the door/hinge assembly onto the map box frame.


With the map box assembly completed, moved on to begin working on installing the backup instruments. One of the unfortunate things about powder coating is that it partially fills screw holes and instrument holes, so the really tight fitting backup instruments would not fit into the holes until the offending material is removed. Had to use a jeweler’s file to remove the powder coating from the inside of the holes for the altimeter and vertical speed indicator. Discovered I did not order long enough screws for the altimeter because I used either the vertical speed indicator or airspeed indicator for measurements not noticing at the time that the altimeters case is much thicker where the mounting screws go. Was hoping to have this panel finished this work session but will need to hold off for a couple of days until the longer screws from Aircraft Spruce get delivered. 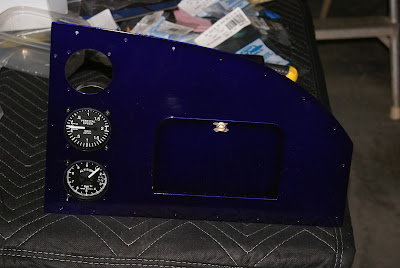 Backup vertical speed indicator installed into the F-00035 right instrument panel section using black brass hardware. Will need to get longer screws for the altimeter due to it having a thicker case in the area where the mounting screws are, so it only has one temporary screw holding it at the moment.


Will not be mounting the compass yet until all the rest of the panel work is completed … don’t want it subjected to possible magnetic fields from power tools or screwdrivers that have become magnetized ... so it will be the last item installed in the instrument panel.