Being at a temporary impasse when it comes to moving forward with the instrument panel, decided to continue making forward progress and work on the tail cone’s fairing while waiting for the center panel section.


Last fall when preforming the initial fitting of the tail cone’s fairing, Van’s plans suggest there should be at least 1/8"of clearance between the fairing and the stabilator and also between the trim actuator pushrod and the slot in the fairing. The clearances were less than optimum, so at that time marks were placed on the fairing and the stabilator skins where material would need to be removed. A Dremel outfitted with a sanding drum was used to remove the excess material followed by a file and sandpaper. The initial cuts on the fiberglass were made outside and unfortunately had to be completed inside when the forecasted monsoons cut lose. 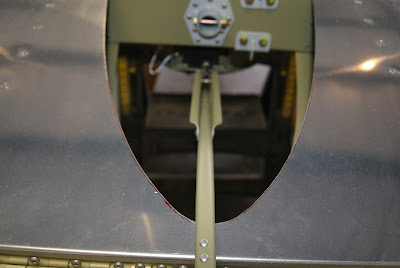 Some material was removed already with the Dremel outfitted with a sanding drum. This still needs a little more work. 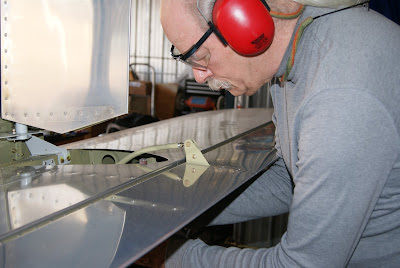 Using the Dremel from below to remove material from the stabilator so the sanding drum could not inadvertently skip across the stabilator’s skin. It was raining so hard outside the noise level in the hangar was deafening so ear protection was necessary. 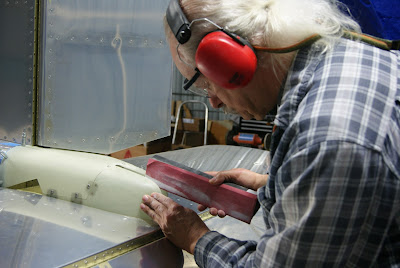 Tweaking the gap between the slot in the fairing and the trim actuator pushrod.


There is still a little tweaking left to do, but it is almost there. Once the clearance issue is resolved, the twelve #40 holes in the fairing at the aft end of the tail cone need to be drilled to #27 and nutplates installed.
Posted by John at 9:48 PM