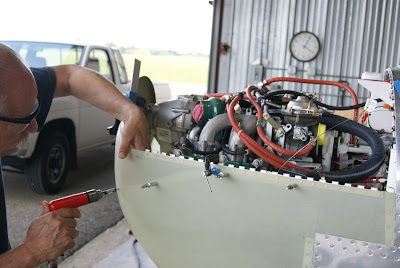 Drilling a #40 hole through the lower cowl and into the upper flange of the air duct for the instillation of Clecos every 6" or so. A block of wood was used to keep slight pressure against the flange on the air duct to keep it tight to the lower cowl while drilling.


After the upper flange of the air duct is drilled and secured with Clecos, more measurements are checked and when all appears as good as it is going to get, the lower cowl is to be removed so the lower flange on the air duct can be drilled. 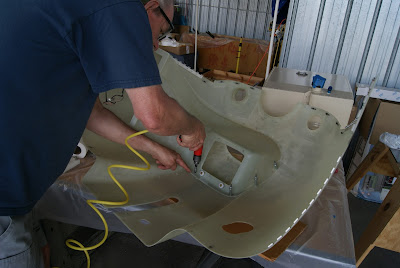 Drilling the lower flange on the air duct into the lower cowl.


At this point, the air duct is checked again by placing the duct interface onto the end of the duct. The duct interface is a frame that slips over the end if the air duct and will support a rubber gasket that will mate to the coolant radiator. The preliminary test fit looked good. Truth be told, the lower cowling is cycled on and off many times during the process for material trimming to obtain the best fit along with correct clearance measurements.


The reason for all the drilling and Clecos, is in preparation for bonding the air duct onto the lower cowl with Epoxy resin. The areas where the air duct contacts the lower cowl will be marked then the pieces will be separated for scuffing with sandpaper to insure a good bond when the Epoxy resin is mixed and applied along with some strips of glass cloth.  The builder will only get one shot at this …. so this is the time to perfect the fit so all the components play nice with one another before the Epoxy resin is mixed and the lay ups and bonding begin.
Posted by John at 9:00 PM