Yesterday, with the assistance of Mike K., the upper and lower sections of the RV-12’s cowling were drilled. The duct tape that was put on the cowling pieces to hold positioning was still doing its job … in that, there was still a nice snug fit to the fuselage for drilling. Mike helped hold a little pressure while two rivet holes were drilled into the F-1201-J&K hinges (on either side of the access cutout for the upper cowling’s hinge pins) and secured with Clecos per the plans.


After drilling and inserting Clecos in all the mounting holes for the lower cowling, the rivet holes for the upper cowling were drilled into the F-1201-J&K hinges. This will allow for removing some of the Clecos so the side edge of the cowling can be lifted for a few cycles of sanding until there is a snug fit to the lower cowling without any bulging as there would have been if the plans would have been followed in order. 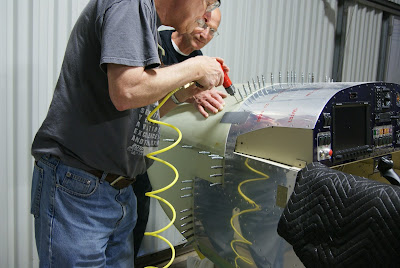 Mike K. keeping a little aft pressure on the upper cowling while it is being drilled.


Now that both the upper and lower cowling sections have been drilled, it will be easy to remove a few Clecos and lift the edge of the upper cowling up so the side edge can be sanded to eliminate the small overlap. In my case, there was about 3/64" overlap on both sides, mostly at the firewall, that tapered to about perfect near the front of the F-12115 side hinge. 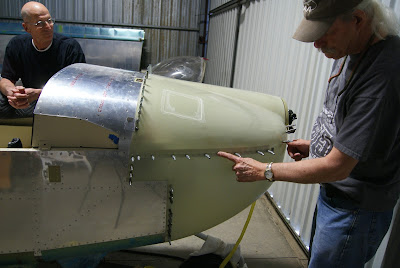 Both cowlings drilled and secured with Clecos to the fuselage. Only the holes for the F-12115 hinges remain to be drilled after a little material is removed from the upper cowling along the line my finger is pointing towards.


Did not complete the task of drilling the F-12115 side hinges for a couple of reasons … Mike had a commitment he needed to get to so he could not wait around while I was sanding down the side edges of the upper cowling. The other reason is … I have run out of #40 Clecos and really do not have enough to drill the side hinges in the cowling. I had extra #40 Clecos but still not enough for my liking (this task takes far more than I thought it would). I reached out to Tom, a fellow builder in the area who is putting together a RV-10. Tom lives a couple of miles from the airport and said it would be no problem to loan me a few handfuls of Clecos … so the plan is to finish drilling the F-12115 side hinges this afternoon.
Posted by John at 6:18 AM