The Eagle Grows A Beak!

Yesterday, after borrowing a bunch of Clecos from fellow builder Tom, commenced drilling the upper cowling into the F-12115 side hinges. Prior to drilling, duct tape was used to keep the cowling halves tightly together. Mike K. was available to lend a hand and assumed the role as the “Pusher Man” by gently pushing a block of wood up against the backside of the F-12115 side hinge to keep it pressed snugly against the upper cowling while the #40 holes were being drilled. When near the battery box, we switched to a dowel rod fed through the round hole in the front of the cowling. Our efforts resulted in what I feel is a very nice fit. 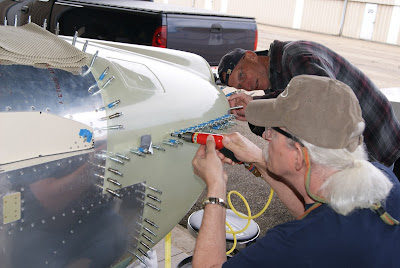 While Mike the “Pusher Man” was pushing a piece of dowel rod against the hinge from inside the cowling to keep it snug against the upper cowling as the #40 holes were being  drilled.


After the right F-12115 hinge was drilled, we moved over the left side and repeated the process. Both side hinge seams are nice and snug as can be seen in the photo below of the right side after drilling … (and it is the worst fit of the two). Also pulled out the hinge pins one at a time and they both were  very easy to reinstall 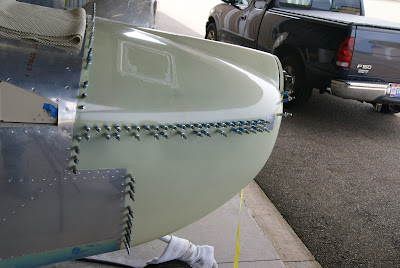 The left side turned out even better than the right side shown in this photo … and this side looks just fine.


After finishing up drilling both sides of the upper cowling, decided to take advantage of the calm non-rainy day and roll the fuselage outside to check out the GPS2020 receiver’s satellite strength. After powering up the SkyView, went and checked the GPS signal strength and it looked great. While the fuselage was outside, decided to sweep the hangar floor which was a long overdue task. 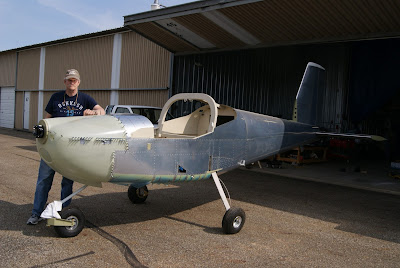 The Eagle basking in the sunlight with its newly fitted beak.


Except for a few screw holes on the bottom of the cowling that have yet to be drilled, all the holes are now drilled. However, there is still a lot of work necessary before the cowlings will be completed … all the hinges need to be riveted in place and the lower cowling requires a little fiberglass work to install an air duct for the oil & coolant radiators. Except for the six holes that were drilled into the front of the cowling, all the remaining #40 holes that were drilled now need to be countersunk for solid flush rivets as called for by Van’s. Hoping the rains forecasted for today are of short duration so the cowling can be countersunk outside to avoid getting fiberglass dust inside the hangar.
Posted by John at 5:50 AM