Other tasks that were accomplished over the weekend involved drilling eight #19 holes in the lower cowl (using the nutplate holes in the F-1285 cowl bottom close-out as a guide prior to mounting the nutplates) and drilling the four mounting holes into the bottom aft edge of the lower cowling that secure the bottom of the cowling to the two F-12118 cowl attach plates attached to the fuselage.


To drill the holes in the cowl for the F-12118 cowl attach plates, Van’s instructs the builder to run a #30 drill through the hole in the nutplates and drill lead holes in the lower cowl from the backside. I ran into a small issue here, in that, the stiffener riveted onto the right side of the firewall prevented my drill from squaring up with the nutplate. I tried to use my angle drill with the short threaded drill bits, but the body on it is so long that the slope of the lower cowling interfered. Next I tried my Harbor Freight 90 degree drill that has a much shorter body and was surprised to find the drill bit does not go very deep into the chuck, making the drill too tall to clear the stiffener. 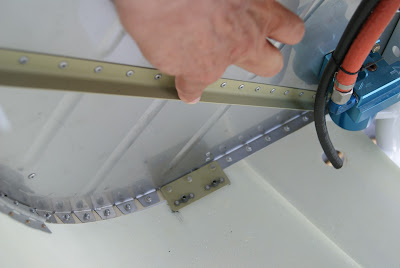 The stiffener my finger is pointing towards was interfering with the drill preventing a square alignment with the hole in the nutplates.


The drill clearance issue was solved by using the Dremel outfitted with a cutting wheel to shorten the drill bit. After about 10 seconds of cutting, the drill bit was shortened enough so the body of the drill would clear the stiffener. 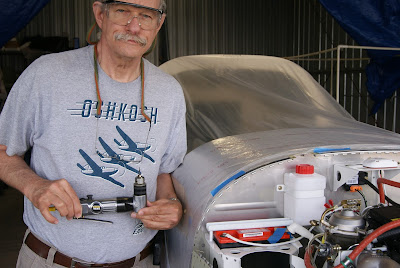 
The #30 drill bit was run down through the nutplates on the F-12118 cowl attach plates from the top to drill through the lower cowling. The four #30 holes will need to be enlarged to #19 after the cowling is removed. 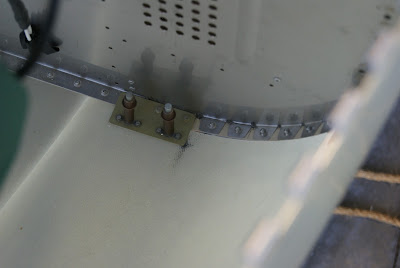 #30 holes drilled through the nutplates on the F-12118 cowl attach plate into the lower cowling. 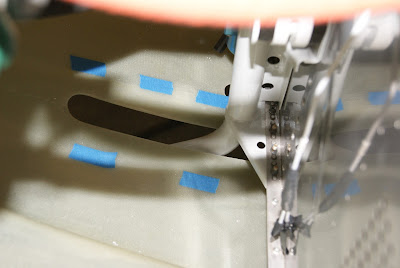 The blue tape evenly spaced on either side of the cutout was used for a visual reference to center the F-1285 cowl bottom close-out before drilling the holes into the lower cowling. 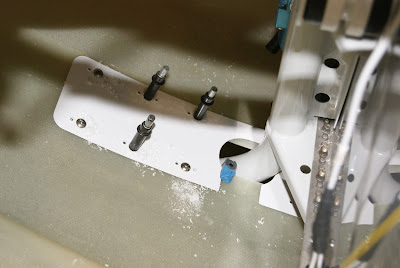 #19 holes drilled into bottom cowl using the F-1285 cowl bottom close-out as a drill guide after the slot aft of the landing gear tube was elongated a bit allowing the close-out to be moved forward so it could be attached to the bracket not in view.


All that is left to do is install the eight nutplates onto the F-1285 cowl bottom close-out, enlarge the four holes for the F-12118 attach plates to #19 and the lower cowl mounting system will be finished. Later in a few days a fiberglass air duct will need to be bonded onto the inside of the lower cowling by way of a fiberglass layup. This duct will supply cooling air for the oil and water coolers.
Posted by John at 6:52 AM