An Exhausting Day At The Office

The next assembly item that was attacked was installing the stainless steel exhaust system. There is nothing really difficult here, but a helper would have been helpful. The four exhaust pipes that connect the exhaust port on the cylinder heads to the muffler are installed first. These pipes are to be installed but not tightened down until after the muffler is installed so the plans instruct the builder not to tighten down the nuts on the flanges beyond the nuts being flush with the studs. 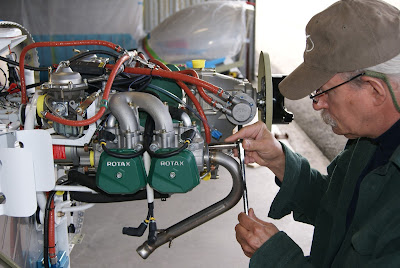 Installing the exhaust pipe on cylinder #1. 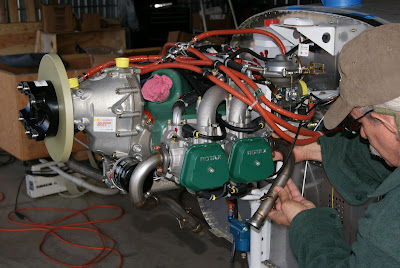 Installing the last of the four exhaust pipes on cylinder #4.

The muffler to exhaust pipe connection used on the Rotax 912 engine is similar to that used on snowmobiles, in that, the muffler utilizes a “ball joint” type of a connection and springs to keep the muffler tight to the exhaust pipes. It is hard to see in the above photos, but the end of the exhaust pipes are not cut off straight … the ends are rolled a little to fit into the ball portion on the muffler. This arrangement should eliminate the cracking that can become problematic on aircraft exhaust systems where the pipes are welded and vibrations create cracks in the pipes or muffler because unlike a welded exhaust, the “ball joints” will allow some movement to absorb vibrations and expansion and contraction. 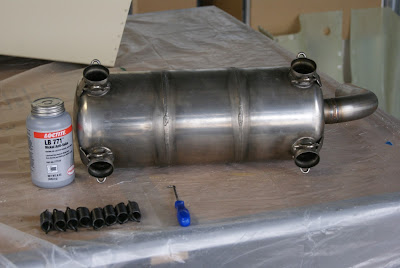 A high temperature anti-seize compound is called for on the muffler's ball joints …. for this application it is important the anti-seize compound used be COPPER FREE because copper can react with stainless steel when under high temperatures and changes the properties of the stainless … and not in a good way. Unfortunately, the only anti-seize compounds available locally at automotive stores contained copper so McMaster-Carr is where the anti-seize was ordered from. Loctite LB771 Nickel Anti-Seize is rated to 2,400 degrees and is a perfect product for this application. Unfortunately, it was only available in a large bottle which contains enough to use on the entire fleet of RV-12’s for the next 20 years. It only takes a thin coating of anti-seize on each ball joint to do the job. After placing a thin coating of anti-seize on the muffler and a little on the ends of the exhaust pipes for good measure, the muffler is attached to the exhaust pipes using two springs per pipe. Because of working by myself, I utilized a couple of bungee cords to hold the muffler so I could stretch the springs and place them over the loops on the exhaust pipes. 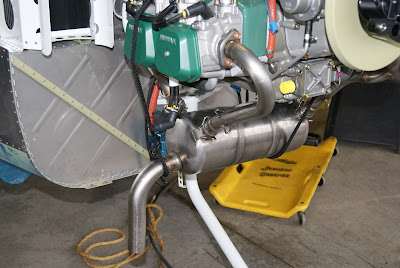 A couple of bungee cords were used to help hold the muffler in place while the attachment springs for each exhaust pipe were stretched onto the hoops.


After all eight springs are in place, the muffler assembly is to be wiggled fore and aft while being moved sideways to help seat the exhaust pipes in the muffler. At this point, the plans instruct the builder to center the muffler under the engine and torque down the exhaust pipe’s flange nuts to between 106 and 177 inch pounds. The Rotax Illustrated Parts Manual states 110 inch pounds so that is what I went with. Incidentally, a 12 mm crow’s foot wrench will be needed to torque some of the nuts. In my case, that required reducing the torque from 110 to 100 inch pounds to achieve the desired torque. Making the torque correction calculations when using a crow’s foot wrench can be found at the following post. 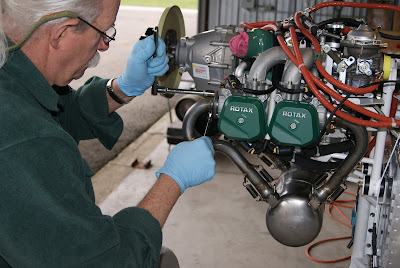 Tightening both flange nuts at the same time to apply an even pressure on the flange while snugging the flanges up for torqueing. 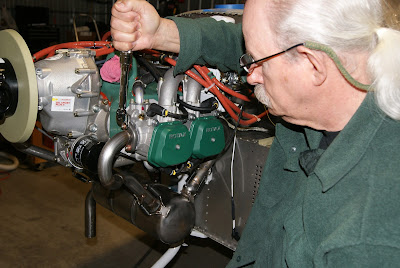 Interestingly, this is the point where Van’s instructs the builder to fit the lower cowl and if necessary move the muffler (it was)  from side to side whichever way is necessary to allow the exhaust pipe from the muffler to drop through the slot in the lower cowl. Well, this can’t be done if the nuts on the exhaust flanges are torqued down DUH!!! 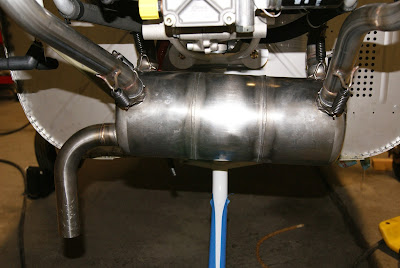 One can see the muffler is offset to the left of center which also lowers the left side of the muffler a little.


One contributing factor to the above may be that last year about this time Van’s changed the mounting position of the muffler moving it further aft to offer more distance from the oil cooler. Older versions of RV-12 exhaust pipes exit the lower cowl at an aft angle and needed to be cut shorter. The new muffler setup has the exhaust pipe exiting the lower cowl pointing straight down. I’m guessing perhaps the new muffler and exhaust pipe may be a little wider than the old version thus requiring the muffler to be shifted left a little? Anyways, do yourself a favor and don’t torque the exhaust flange nuts until after test fitting the cowling and positioning the exhaust pipe in the center of the opening. 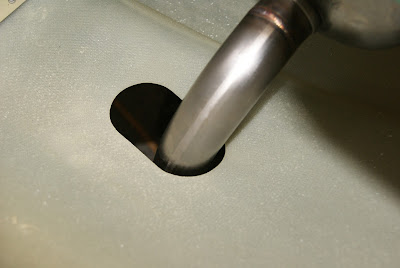 Exhaust port from the muffler is now centered in the slot cut into the lower cowl.


At this point Van’s has the builder remove the exhaust springs one at a time to fill them with high temp silicone. I forgot to bring the high temp silicone from hole so will complete that task during the next work session.
Posted by John at 8:33 AM