More Progress On The RV-12’s Cowling

One of the reasons there has been a lull in the activity on the cowling is a replacement piece of hinge material was ordered to remake the F-1201J hinge. As mentioned in a prior post, I had been attempting to install the F-1201J hinge upside down last week and had fluted the hinge material. Once the mistake was caught, the flutes were pounded out and the hinge material was reshaped to conform to the curve of the fuselage skin. I’m sure it would have been OK, but decided to just remake the hinge piece because it just bothered me. Unfortunately, could not move forward until the upper cowling was fitted and that was held up by the hinge.


Once the F-1201J hinge was remade, the upper cowling was set in place so the approximate overall fit could be checked. Once it was determined it would be OK to move forward, two holes were drilled into each side of the lower cowling to allow for Clecos to temporarily hold the lower cowling in place. The red marks placed onto the hinge material to denote the rivet hole locations are hard to see through the fiberglass unless there is plenty of light … so a flashlight was used to make the marks easy to see. 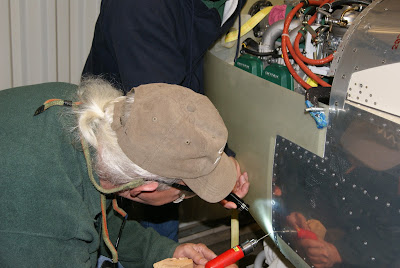 Bernie holding the flashlight so the red sharpie marks on the hinge material denoting the rivet hole locations could be easily seen through the fiberglass. Drilling one of the four #40 holes that will be used to temporarily secure the cowling to the fuselage. After starting a little dimple in the fiberglass, I reached inside to hold the hinge tightly to the cowling while drilling. 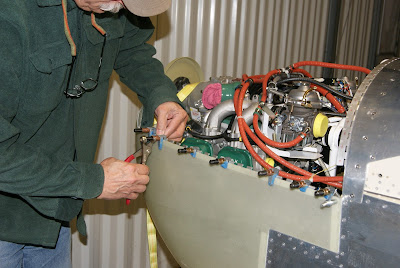 Aligning the top edge of the cutouts on the F-12115-L hinge level with the edge of the lower cowling and securing it with Cleco clamps for drilling. 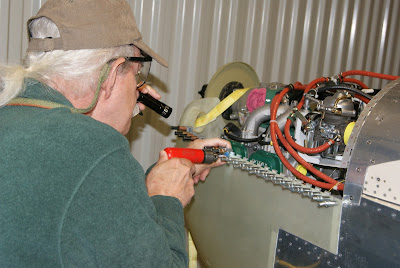 Drilling through the fiberglass with a #40 drill bit and into the F-12115-L side hinge.


After drilling the lower cowling for the F-12115-L&R side hinges, the lower cowling’s side hinge pins were fit. I made the decision to move the mounting location for the tab on the hinge pin further aft to about 9/16" forward of the F-12115 hinges. Also decided to make the cut out for the hinge now … so the upper half of the cowling was loosely set in place so measurements could be taken for the cut out or “knuckle” as Van’s calls it. I may need to elongate the knuckle a little more, but for now it is fine. This is a little out of order with Van’s plans … but I wanted to verify the clearances between the spinner backing plate and the cowling once again prior to doing any more drilling. Cutting the knuckle now allowed for a round of and final sanding to remove more material from the aft edge of the upper cowling to achieve a snug fit with the fuselage skin. 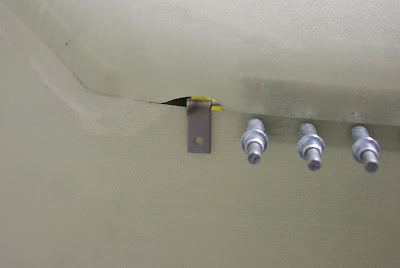 The cowling's side hinge pin for the left side in the position that will soon become “home”.


After spending quite a bit of time sanding, fitting, sanding and refitting (repeat many times) the fit is pretty good there is a small gap on the left side of the lower cowling that will close up if pushed on gently so will try to have a helper apply a little pressure to snug it up when final drilling the hinges. Below are photos of the fit prior to the final drilling of the cowling pieces which are planned for this afternoon. 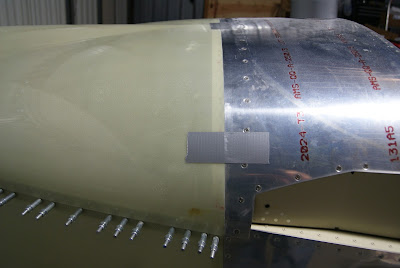 Upper cowling left side prior to final drilling … (the right side looks about the same). 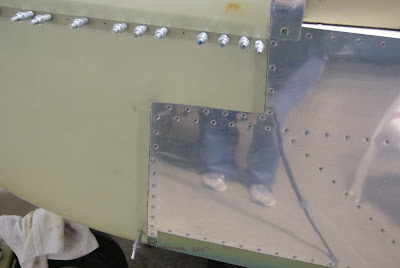 Lower cowling left side prior to drilling … this has a little gap which will close up significantly if a little pressure is applied. 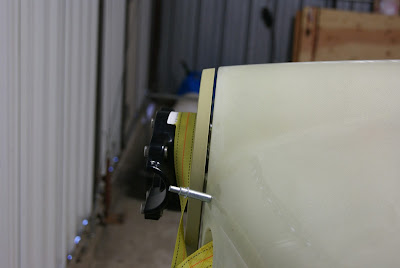 Nice gap between the spinner back plate and cowling of approximately 1/8" ... hope it stays that way after final drilling. 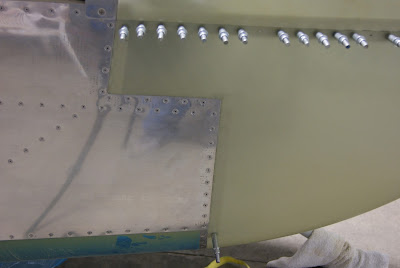 Right side of lower cowling prior to drilling.
Posted by John at 6:25 AM