Yesterday there was a window of opportunity between rain storms so the fuselage was rolled outside to countersink the 150 plus recently drilled #40 holes in the cowling. All but the six holes that were drilled into the front of the cowling require countersinking for AN426AD3 rivets. There is nothing difficult about this task once the countersink cage depth is set. Van’s suggests leaving the rivets a little high (up to .005 thousands) so the fiberglass is not weakened as much … so I set the countersink cage so the rivet was just not quite flush by  a click or two on the cage. It was a little tricky countersinking the sides of the cowling because when pushing the countersink cage onto the cowling, the cowling tended to flex inward … so it was necessary to hold onto an adjacent Cleco to prevent the inward flexing. I was making it a point to make sure Clecos were on either side of the hole being countersunk. 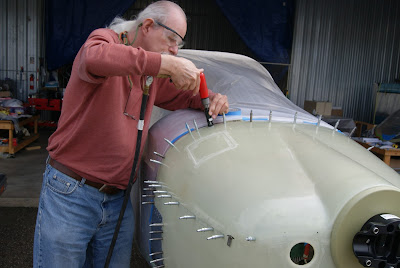 Just beginning the countersinking of cowling for flush rivets … a few holes done and 150 yet to do.


One of the things I forgot to do prior to drilling the cowlings was to place paper extending from the firewall to over the engine to catch the debris from drilling. So when the top cowling was removed, it was a mess and necessary to borrow Jan’s portable vacuum cleaner (the one that will pick up a bowling ball) and suck up all the debris. So fellow builders fitting the cowling with the engine installed as I have, do yourself a favor, place paper or plastic sheet over the entire engine area … you will save yourself at least 15 minutes or so of vacuuming fiberglass dust and metal shavings.


After everything was cleaned up around the engine, the F-12115L&R side hinges were deburred and readied for riveting. Ran out of time so will begin riveting the hinges to the cowling sections this afternoon. 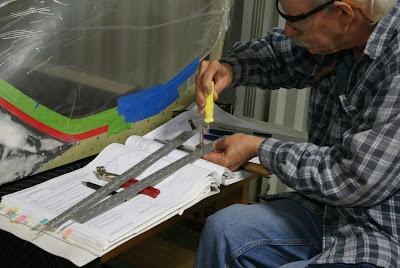 While the countersinking and deburring was going on, I was also performing a fuel leak test of sorts. I placed two gallons of fuel into the fuel tank and every couple of hours I turned the tank onto a new side so see if any leaks appear. As mentioned in a previous post, I don’t think the tank will leak  ... but when the tank was pressurized to 24 inches of water for the pressure test, it was around 78 degrees and during the evening the temps went into the 30’s and the next afternoon when I got to the hangar the temps were around 43 degrees. So the gauge was showing pressure, but nowhere near 24 inches of water ... at the time, I placed the tank in front of the kerosene heater and after only a few seconds the pressure began to rise on the gauge leading me to believe the drop was due to temperature fluctuations. However, felt prior to installing the tank in the RV-12, it would be prudent to pour a couple of gallons of fuel into it, hope for the best ... and wait and see what happens. 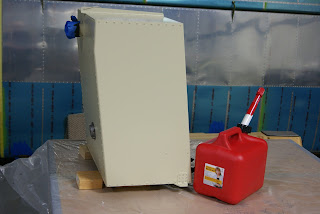 So far the fuel tank bottom and now front have passed the “drip test”.
Posted by John at 6:29 AM