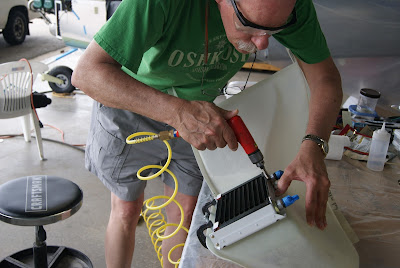 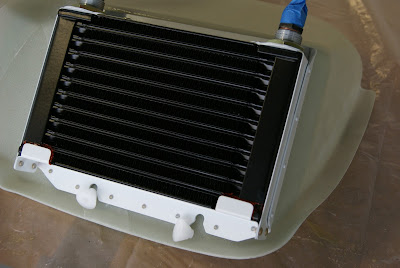 The two conical guides are to be positioned in the slots on the lower flange of the oil cooler box and used to match drill the air duct.


With the cooler bolted to the duct using the previously installed nutplates, the conical guides are placed in the slots on the lower flange of the cooler box and held in position while a #12 drill bit is inserted into the guides to drill the remaining two mounting holes into the fiberglass air duct. Once the drilling was completed, the conical guides were bolted in position. I ended up using an additional thin washer under each nut because the unthreaded shank of the bolt still showed beyond the single washer called for in the plans. 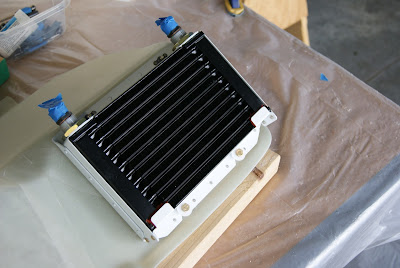 Completed mounting of the oil cooler assembly on the fiberglass air duct. 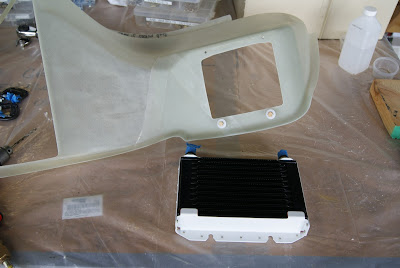 
To begin fitting the air duct, the lower cowling is to be installed and prior to slipping in the hinge pins on the left side, the air duct is slipped into position between the Rotax engine and the lower cowl for a test fitting. 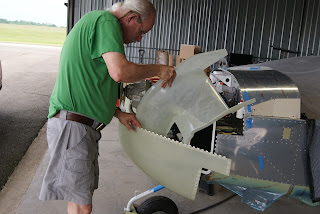 Slipping the air duct into position between the engine and lower cowl. 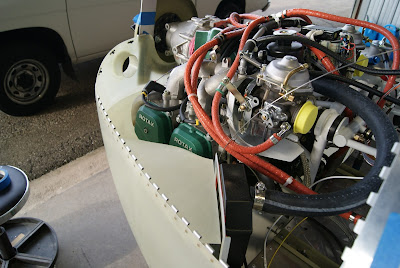 Air duct in the approximate final position … a little tweaking is still necessary.


The plans have a few details that show the correct positioning at various locations and a few measurements that need to be met prior to moving on and bonding the air duct to the cowling. One point that could have been worded better in the instructions is that the forward edge of the air duct should butt up against the aft edge of the oval air inlet’s opening. This can be seen as a curved line directly under the prop flange in the following photo. 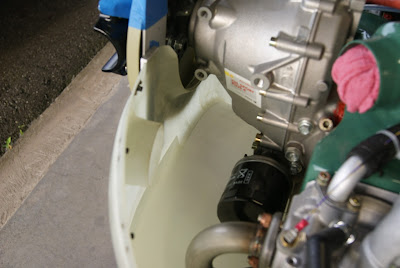 The forward edge of the air duct needs to butt up against the upper aft edge of the air inlet on the lower cowl. This can be seen as a dark curved line on the fiberglass under the prop flange.


At this point, once measurements have been met, the plans instruct the builder to begin drilling holes and securing the air duct to the lower cowling with Clecos. I did not feel comfortable doing that quite yet so spent a little more time tweaking the positioning and getting comfortable with all the steps that will be involved.
Posted by John at 6:35 AM