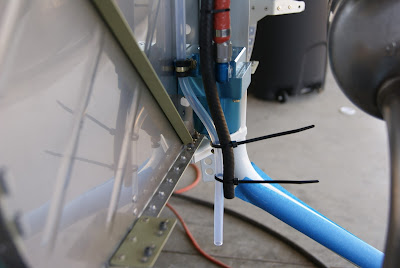 Oil tank vent tubing after using a heat gun to soften the tubing up a little so a joggle could be formed. Gloves were worn while holding the warm tubing in the desired shape as it cooled. Once cooled, the tubing took the desired set.


I waited until early evening to attempt opening the cooler door (this gave the silicone a full 24 hours + to set) and happy to report it popped right open. I was planning on peeling the packaging tape off the fuselage to lift the door and packaging tape as one, but as soon as I began applying pressure to lift the tape where the edge of the door was … the door just popped open. There was one area along the top of the door where the silicone was not quite fully cured and a little pulled away from the door. But inspecting the door reveled there is a good seal above and below the spot that pulled away … so time to move on. 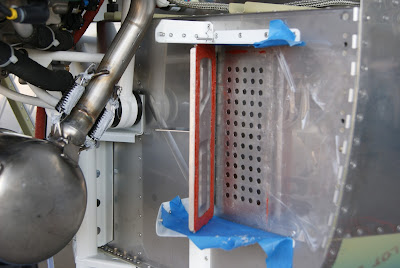 
Placing the clear packaging tape down over the entire firewall area first and then slathering it with Vaseline worked great! I would whole heartily recommend this method to anybody faced with this task. May also be best to let the silicone cure for another full day prior to moving the door but admittedly, I was getting impatient and wanted to move on.


With the cooler door fiasco in the rear view mirror, continued on to the next step … fitting the coolant radiator. The instructions point out a tight fit is desired between the radiator and the two FF-1204B&C upper and lower ribs that make up the cooler box. The builder is to strive for 1/32"of clearance between the edges upper and lower ribs all the way across the core of the radiator. There are two things going on here … first the clearance measurement, plus the goal is to position the radiator so the radiator is parallel with the edges of the FF-1204B&C cooler box ribs. The plans suggest elongating the mounting holes on the radiator (if necessary) to achieve the clearance and positioning of the radiator. By now, I have learned if Van’s plans say “it may be necessary” to perform a task … it will be. 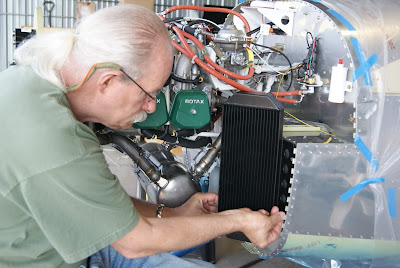 Initial test fitting of the radiator. This reveled the holes do indeed needed to be elongated to move the radiator inboard a little so it will be parallel with the upper and lower cooler ribs. 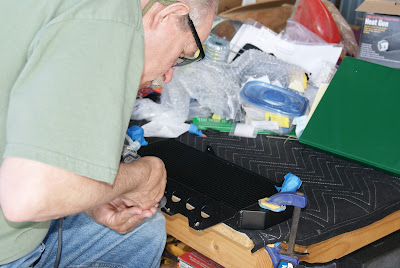 
To make the task of measuring easier, I decided to rummage around in the scrap pile and found a couple of pieces of .032 aluminum and used them as 1/32" spacers for setting the clearances between the radiator and the FF-1204B&C cooler box ribs. After a couple of cycles of on and off and tweaking the holes with a rat tail file, the fit was finally acceptable and the three bolts that mount the frame of the radiator onto the firewall were tightened down. This was done while the .032 spacers were still in place between the radiator core and the edge of the upper and lower cooler box ribs to hold the positioning. 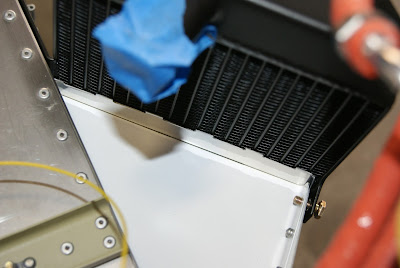 Looking closely at the photo, one can see the .032 aluminum spacer placed between the radiator core and the edge of the FF-1204B cooler box rib … there is also another spacer out of sight at the FF-1204C cooler box lower rib.


The radiator is now mounted, but the two inboard bolts will require washers added as spacers. This is because the radiator needed to be offset inboard, thus leaving a gap between the radiator and the cooler box frame. The gap came as no surprise because the instructions elude to the possibility of needing to add washers as necessary to fill the gap. 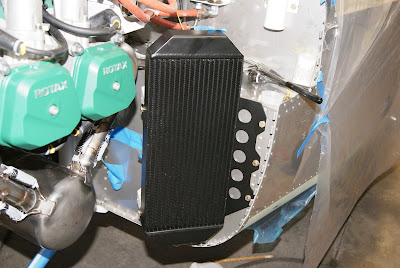 Coolant radiator mounted and snugged down at the firewall … the two inboard bolts will require washers added as spacers.


Did not have enough time to finish placing the washers on the remaining two mounting bolts, but will finish off that task first thing during the next work session at the hangar.
Posted by John at 6:25 AM