This afternoon went for the second attempt to make the cooler door gasket after the first attempt met with utter failure due to the use of Boelube as a release agent for the silicone. This time around I changed things up a little, in that packaging tape was placed on the firewall first then the tape was coated with Vaseline. The idea being … if the silicone still wants to stick to the tape, at least the cooler door can be removed from the firewall by peeling the tape away from the firewall without bending the door up. After roughing up the door again and cleaning with Acetone, a liberal coating of high temperature silicone was applied to the door and then the door was placed on the hinge, closed and pressed onto the firewall then taped closed. 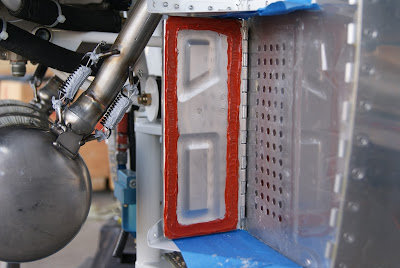 Cooler door Act II - Coated with high temperature silicone and ready to be taped closed for the second (and hopefully successful) attempt to form a gasket. 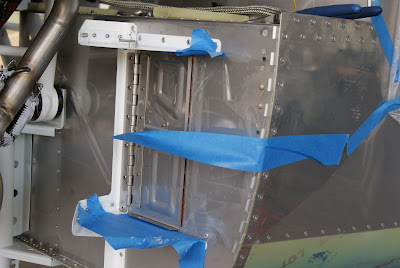 Cooler door taped closed and will be left to percolate for a day or two.


Normally, the next step is to mount the coolant radiator and associated hoses … but need to wait for the silicone on the cooler door to cure first ... so moved on to mounting the oil tank.


The oil tank itself is a piece of cake to install … in that it just slips down into a cradle and is secured by two band straps. Prior to tightening down the straps, the ring band that seals the top of the oil tank onto the body needed to be unlatched and rotated so it is facing forward … it was right adjacent to the carburetor and would have been impossible to unlatch without removing the tank. Doing this should allow the top to be removed to clean the inside of the tank without removing the tank from the airplane … this is a necessary task if burning leaded fuels on a regular basis because over time the lead will form a nasty paste on the bottom of the tank. I was a little disappointed not to find a torque specification given for the strap hardware, so I winged it and made it tight, but not overly so. 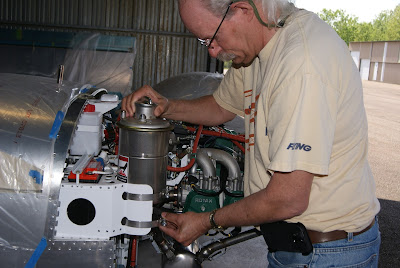 Lowering the oil tank through the band straps.


Once the tank is in position and the bands have been tightened, the air vent pluming which consist of a short piece of rubber hose and a 28” piece of tubing is installed onto the vent pipe on the tank. To keep the tubing away from the air filter (not yet installed), a #19 hole needs to be drilled into the F-1201Q battery angle so the vent tube can be wire tied onto the angle preventing it from touching the air filter. 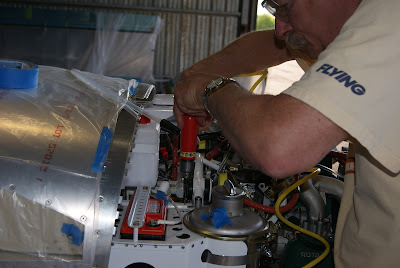 Drilling the #19 hole into the F-1201Q battery angle that will be used to secure the oil tank’s vent line. Looking closely at the photo one can see the vent tube with the black piece of hose on the end of it that is used as a coupler laying on the upper fuselage skin.


The vent tubing was temporarily installed on the tank and a piece of wire was used to hold it in position while an Adel clamp was installed onto the gascolator’s right mounting bolt to secure the tubing. 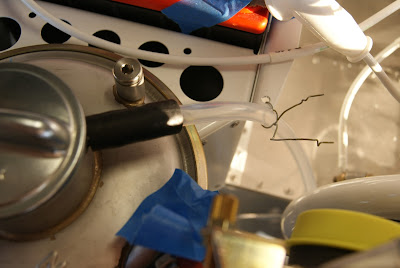 A piece of wire is used to hold the vent line in the approximate position while the lower Adel clamp is installed (see next photo) to support the tubing.


The right bolt that secures the gascolator to the firewall was removed and an Adel clamp installed under the bolt to secure the oil vent line. Ran into a little issue here, in that, when the Adel clamp was positioned as shown on the drawing it was physically impossible to get a wrench on the bolt. The drawing in the instructions shows the clamp installed with the loop of the Adel clamp forward. I initially attempted to install the clamp this way … but found there were no tools in the arsenal that could be used to tighten the bolt because the Adel clamp blocked access to the bolt. To remedy the problem, the Adel clamp was flipped around so a wrench could be used to retighten the gascolator bolt. 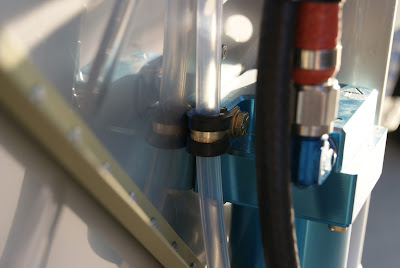 The drawing shows mounting the Adel clamp opposite from this … but the clamp itself prevented getting wrenches onto the bolt, so it was flipped around.


Later, I’ll use a heat gun to soften the tubing a little so a joggle can be formed to direct the tubing towards the black hose that can be seen in the previous photo then securing it to the hose with wire ties. This will pull the tubing away from the stiffener on the firewall and also away from the edge of the fuselage out of view in the above photo.


Note: The hose clamps for the vent line hose and tubing at the oil tank were not installed at this time because the vent line will need to be removed later when performing the purging of the oil system … so there is no point in placing clamps on the hose and tubing knowing they will need to be removed for the purge. The purge requires placing an air source onto the vent fitting at the oil tank and pressurizing the oil tank to between 7 &14 psi (if memory serves me correctly) to force oil through the engine while performing the purging process which is necessary to remove all the air from the oil lines and oil passages inside the engine prior to initial starting of the engine.
Posted by John at 7:12 AM