The parts readied for primer the past few days received additional company today prior to the primer session. Decided to add the seat back angles straightened Thursday to the primer pile so they were cut per the plans, deburred and buffed out on one side. The plans have the builder cut a 45 degree notch from the bottom corner of all four F-1237C seat back angles. The notch will allow the seats to be folded forward to allow access to the rear of the baggage area and the wing pins. After cutting the corners off all four seat angles, they were deburred on the Scotch-Brite wheel.

As previously mentioned in a prior post, the bending machine used to straighten the four seat back angles put small marks in the metal. The plan was to just ignore the small marks, but somehow that seemed somewhat unsettling, so a compromise was struck …. only the outer surface of the seat back angles that can be seen were buffed smooth using a Scotch-Brite polishing wheel. The inside surface will be hidden by the seat back cushions and won’t be seen anyway, so felt that was a fair time saving compromise. 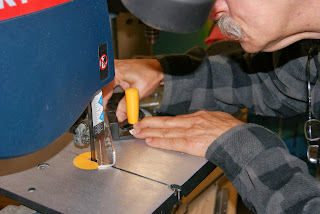 Using the band saw to remove the corner of one of the F-1237C seat back angles. 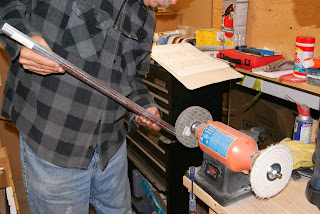 Smoothing the edges on one of the F-1237C seat back angles with the Scotch-Brite wheel. 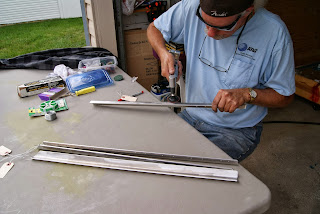 The angle grinder is outfitted with a Scotch-Brite polishing wheel for removing the marks left by a metal bender during the straightening of the bent angles.
To make the primer session more worth while, the seat backs were also deburred and prepared for primer. The seat backs have quite a few lightening holes to smooth with the Scotch-Brite wheel. 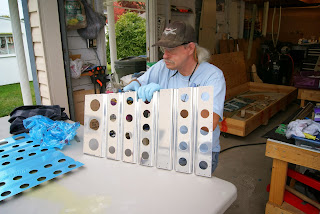 Using the Scotch-Brite wheel to smooth the edges on one of the seat back panels.
Because of the last minute decision to take extra time to prepare the seat components, another late afternoon primer session was under way yet again. No matter how hard the DOG Aviation paint department tries, for some reason painting typically ends up being a late afternoon event and today was no exception. With rain eminent, the push was on  … the parts were quickly primed with priority given to those parts that will receive a JetFlex top coating, hopefully tomorrow if the temps hold. Of course, as luck would have it, I only mixed 8 ounces of primer and ran out with the four seat angles along with a couple of small parts yet to spray. Unfortunately, it began to rain about the same time the batch of primer ran out, so did not mix up another batch to finish off the parts left to prime in the purple tub. 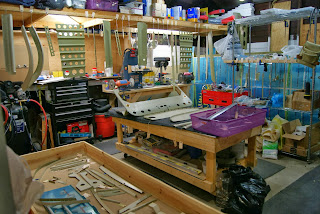 Not many places left to hang parts to dry … perhaps it was a good thing that the spray gun ran out of primer when it did.
Posted by John at 8:39 PM