Today would have been a perfect day to prime or paint the JetFlex but it hardly seemed worth while to clean the spray gun for only a hand full of small parts so continued moving through the plans and prepping parts. Plus the primer is not to be top coated for at least 24 and that would have been late afternoon once again.

There was a minor glitch that was caught today … typically when Van’s has the builder separate a part the part is utilized on that page of the prints. The F-1202M-L&R canopy attach brackets were separated and nothing else was called out on that page of the plans so the parts were primed yesterday. Today while moving forward through the plans it was discovered the rivet holes in the brackets also required machine countersinking. So that was done today along with fabricating a couple of F-1202Y attach brackets for the canopy’s struts. 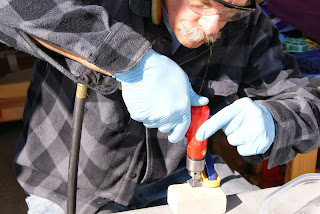 After cutting the F-1202Y strut attach angles to size, the part required holes drilled for the attachment of a nutplate ... so drilling small lead holes first for more accuracy. 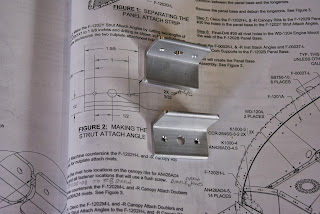 Finished F-1202Y strut attach angles … with two #40 holes for attaching a nutplate and a ¼” hole in the center. 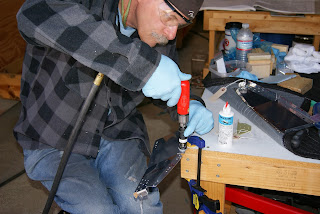 Machine countersinking the nutplate rivet holes along the flanges of the F-1204H canopy rib. 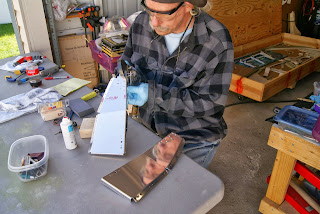 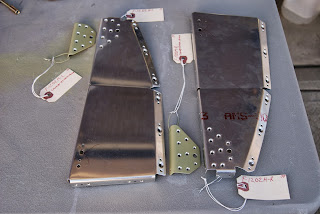 Finished F-1202H canopy ribs and associated F-1202M brackets ready for primer.
In addition to a few small parts being deburred, the last item worked on today was the F-1202B instrument base. After deburring the base, the plans say to dimple the nutplate rivet holes along the aft edge (this is where the instrument panel will attach). The holes appeared to be dimpled already … but upon closer inspection, the dimples were nowhere near deep enough so the pneumatic squeezer was used to dimple the holes to the proper depth for the rivets being used at that location. 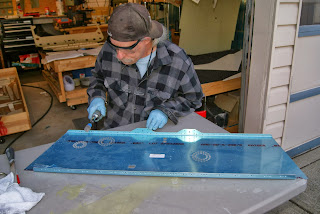 Deburring the edges of the F-1202B instrument base with a Scotch-Brite wheel. 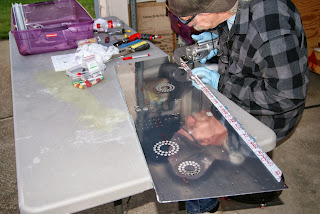 Dimpling the nutplate rivet holes on the aft flange of the F-1202B instrument base with the pneumatic squeezer.
There is only one large component left to prep for primer and that is a flat panel approximately the size of the F-1202B instrument base. Once it is completed, there are just a few remaining firewall forward parts, a few cockpit parts and the components that will make up the glove box (which is an optional install). No way all the remaining small parts will be readied by noon for priming tomorrow … so when the cold front hits tomorrow night, guess I’m out of the painting business for at least a week or more if the forecast is correct.
Posted by John at 9:32 PM