So what is the big problem you ask? Well it is because the angle of the flange on the baggage floor where it meets the F-1204D aft bulkhead .… it is more than 90 degrees. This means even the Clecos are hard to get into the rivet holes … and when they do, both Clecos and Cloco pliers scrape against the F-1224 baggage floors going in and coming out. The baggage floors are always pushing on the Clecos. 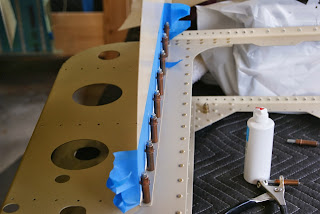 One can clearly see the angle of the F-1224 baggage floor … this makes the floor push tight onto the Clecos.

Now for the fun part … the plans instruct the builder to set AN470AD4-9 rivets. OK what is the big deal? WELLLLLLLL because of the angle of the baggage floor’s flange the riveter (be it hand or pneumatic) needs to be outfitted with two flat rivet sets instead of the customary cupped set for the domed rivet head of a 470 rivet and a flat set to form the shop head. The reason for this is because there is NO WAY to get the riveter straight on the rivets.

Oh … it gets better. You really can’t even get close to being square with the rivet unless a second person is flexing the baggage floor backwards which then allows the hand riveter to ALMOST be in the proper position. I would not even consider using a pneumatic squeezer for doing this …think trying to control its position with all that weight would make the tough chore even tougher. Not to scare off future builders ... I'm making it sound harder than it was but it was challenging to be sure. 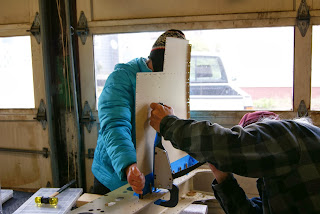 Jan lending assistance by holding the center section in place while flexing the F-1224-R baggage floor backwards which barely creates enough room for the hand rivet squeezer outfitted with two flat sets to get onto the AN470AD4-9 rivets.

The two outer most rivets on both F-1224 baggage floors are AN470AD4-10 rivets and are even more challenging … with the corner rivet being the toughest of the bunch to get onto square enough to squeeze. The domed 470 rivets now have flat spots on them from where the flat set was compressing the rivets … the flat spots can easily be seen in the upper row of rivets in the following photo. Note the plans have the builder install a LP4-3 pop rivet at the fifth rivet in from the right on both sides … the center channel has a recess at this location for the landing gear attachment, so the rivet is not going through the thick center channel material and there was no room in the recess to squeeze a rivet. 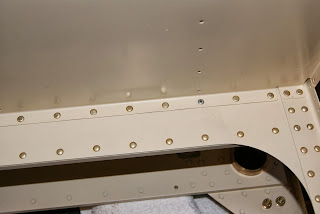 Upper row of AN470 rivets were squeezed with two flat sets bottom row squeezed with the customary cupped rivet set. The resulting flat spots can be seen on the top row compared to the bottom row. 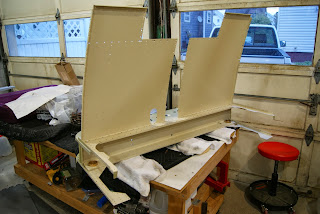 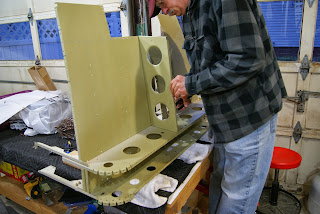 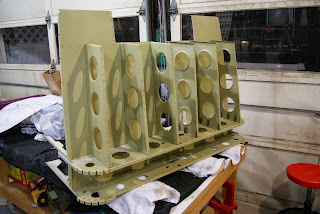 All the baggage ribs Clecoed in position and ready for riveting.
Posted by John at 6:16 AM