After the seat angle issue mentioned in the last post, decided to move on and deal with the bent angles later. If time permits, I may prime and paint the seat backs later this week since they are a larger structure and it would be good to get them out of the way now. However, for the time being, continued moving forward and began preparing section 29 forward fuselage parts for primer and in some cases interior paint.

Deburred quite a few little parts today which are not worth mentioning … but also worked on some larger parts that required more than just a good deburring. The F-1201H upper fuselage doubler required quite a bit of attention. There are 46 rivet holes on the part that required machine countersinking using a #40-100 degree countersink bit. This part receives 23 nutplates which are to be installed on the F-1201H with flush solid rivets. Each of the 23 nutplates also requires having the screw hole dimpled for a #8 screw. 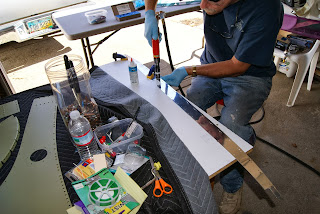 Hanging the W-1201H upper fuselage doubler over the edge of the bench to machine countersink the nutplate rivet holes with a #40-100 degree bit per the plans. 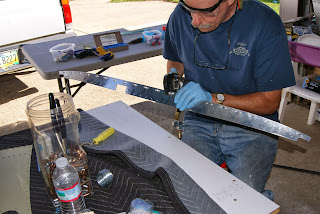 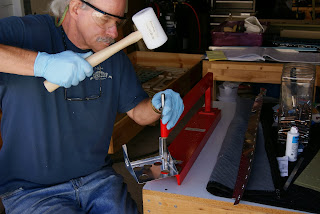 Pete’s C-frame outfitted with #40-100 degree dimple dies quickly made the required four dimples in the back of the F-1201R antenna shelf. 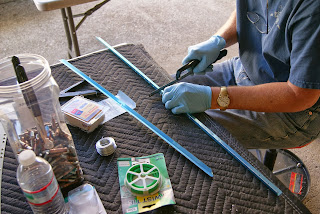 Separating the F-1295-L&R stiffeners with a hand hack saw. 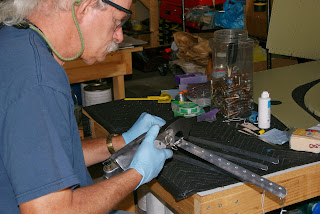 Dimpling the F-1295 stiffeners for flush rivets using a #30-120 degree dimple die in the pneumatic squeezer.  The F-1202N-1 L&R stiffeners were also dimpled for flush rivets.
Work continued on separating and deburring the F-00026-L&R instrument stack mounting angles. Both angles will require quite a few machine countersinks so decided to save that for tomorrow.
Posted by John at 8:12 PM