Continuing on while the weather seems cooperative, more parts were prepared for priming. In addition to a few small miscellaneous parts, the F-1273-L&R baggage area corner skins were deburred and dimpled for the flush rivets being used on the RV-12 project. Note, not all of the holes on the F-1273 corner skins were dimpled … in particular, the rivet holes that reside in the NDZ “no dimple zone” which is that area of the corner skin that will be attached to the F-1270 fuselage skin doubler. As previously mentioned, the wing hides the F-1270 doubler plate, so the decision was made not to dimple for flush rivets in this area. This translated to only dimpling the aft 11 rivet holes along the top edge of the F-1273 skins. The C-frame was also called into action to dimple two holes on each F-1273 corner skin that could not be reached with the pneumatic squeezer. 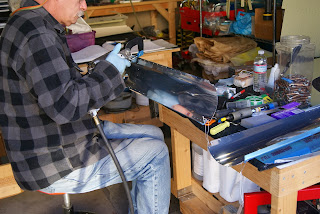 Dimpling one of the F-1273 skins using the pneumatic squeezer outfitted with #30-120 degree dimple dies. 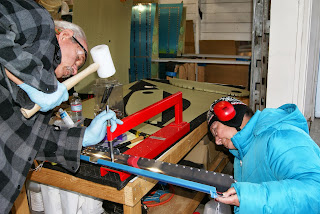 Jan helping to hold a F-1273 corner skin in position for dimpling with the C-frame. 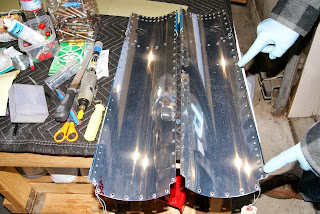 Both F-1273 skins dimpled for flush rivets … note only the aft 11 holes on the top row of the skin are dimpled. Pointing to the forward 14 rivet holes that reside in the NDZ which were not dimpled.
The F-1207A baggage bulkhead top piece was also deburred and dimpled for flush rivets. The flanges on this piece are approximately 80 degrees and after dimpling, the flange angle was readjusted to bring it back to 80 degrees. 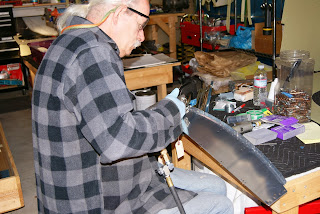 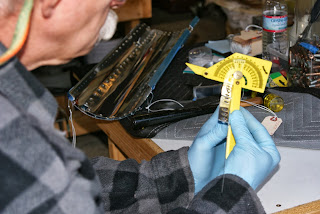 Using an angle gage to check that the flange angle is set correctly after the dimpling was completed.

The next section in the plans covers construction of the seats. The F-1237C-L&R seatback angles were located and it became quickly apparent there was a small issue with the angles. They are all bowed which was quite a letdown considering the quality of the parts in the kit thus far. The metal is .125 thick and whacking it with a mallet is having little affect so think the pieces will require the help of a press at a metal shop or fabricating a bending jig to get them straightened. Both solutions will require extra time which I don't feel I have weather wise. 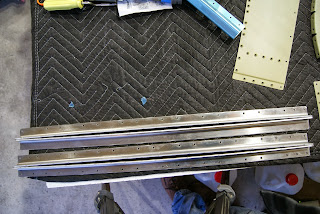 The F-1237C-L&R seat back frame pieces have quite a noticeable bow in them that will require a press of some sort to straighten.

Not being able to tweak the seat angles into relative straightness without getting draconian put me in a sour mood, so decided to call it quits for the evening. May not get these parts painted until spring but don’t really need seats to continue with the build … so thinking I will move on and sort this out later after the good painting weather is over for the season.
Posted by John at 9:22 PM