Yesterday morning, albeit still a bit on the cold side, decided to spray JetFlex on the previously primed parts. Fifteen MPH winds were forecasted for the afternoon so even though the morning temperature was just around 44 degrees, for the most part, the air was calm and perfect for spraying. Mike’s heater was keeping the shop plenty warm for curing paint, so the pieces to be painted were kept inside the shop and carted outside one at a time for spraying so they would stay as warm as possible.  There was not really that many parts needing top coating with JetFlex … basically all the seat back angle frames, the canopy strut mounts and two canopy ribs, along with the two curved pieces the instrument panel will attach onto ... and I don’t think those will be seen unless a panel piece is removed but painted just in case an edge is visible. All went well and as it warmed up outside, the shop temp steadily climbed into the 80’s … perfect for curing the Jet Flex.

Just when you think you’ve got the job done and ready to move on to bigger and better things, there is a surprise! I was looking through the remaining few parts thinking they were just instrument panel parts and discovered a hidden treasure … the F-1207B aft lower bulkhead for the baggage compartment and a small bag containing a couple of very small clips and thin flat metal pieces all of which will need primer. OOPS!  Now I wish the leftover 2oz of Akzo primer from the previous priming session had been placed into the freezer. Oh well, will need to mix up a small amount of primer to use in the airbrush ... hardly worth cleaning the spray gun for only one panel and a few tiny parts. 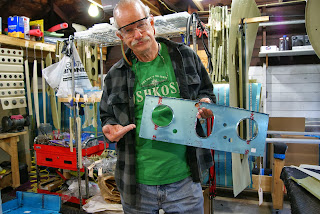 OOPS! The newly discovered unprimed F-1207B lower aft baggage floor bulkhead … and I thought priming fuselage parts was behind me.

The small clips and miscellaneous pieces are not a big deal, so figured a self etching primer could be used on them when necessary ... but now that primer will be mixed again, will prime them too. However, the newly discovered F-1207B bulkhead is a big deal and got me wondering as to how that part got missed altogether. Looking back through the plans, discovered where and how the ball got dropped. The bulkhead install is mentioned as one of the last steps on the page … however, just prior to that, there is a note directing the builder to refer to another section in the plans if an auto pilot is being installed. The auto pilot servo brackets are much easier to install if the F-1207B bulkhead is not installed. I remember going to the other section to locate the auto pilot servo brackets and preparing them for primer. Obviously, never made it back to that page to prep the bulkhead. Oh well, not a big deal in the grand scheme of things … and fortunately the bulkhead only requires Akzo primer and not a JetFlex top coating as well.

The F-1207B bulkhead has been deburred and needs to receive some dimples prior to priming. It will receive dimples for a few nutplate rivets and because of the flush rivets being used on the RV-12 project, the bulkhead’s bottom flanges, which attach onto the bottom skin will receive 120 degree dimples as well.

The map box components were removed from their packaging - deburred and the instillation plans studied. I’ve decided to powder coat the instrument panel and the map box door ... so may as well just have the whole map box powder coated while I’m at it so the inside has a nice durable finish too. The map box consists of two halves, a back panel, hinge assembly, a door with a hinge drill guide attached and a small bag of rivets and latch hardware. The hinge drill guide is cut away from the map box door after match drilling of the hinge assembly is completed. The RV map box kit is a universal kit and also includes some angle pieces not used in the RV-12. They are for installations on other aircraft requiring a method of supporting the back of the map box. A quick perusal of the RV-12 plans reveled the back of the map box gets bolted to the instrument panel base. 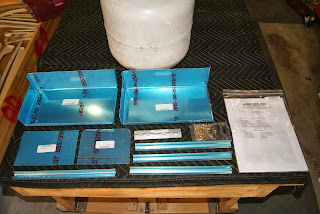 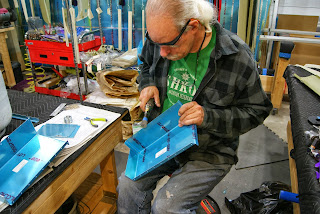 Deburring one of the map box halves with the small Scotch-Brite wheel in preperation for powder coating.
Posted by John at 7:39 AM