Yesterday, not too very much was accomplished on the RV-12 construction … but progress was made. The weather was accommodating for a small JetFlex spray session. Looking forward in the plans reveled a portion of the longerons aft of the canopy deck would be visible from inside the cockpit, so decided to spray that portion of the longerons with JetFlex. Also did the narrow strip on the instrument panel base where the front panels attach. Not sure if it will be visible, but just in case there are any gaps the primer will not show.  It took far far longer to cleanup the spray gun than it did to spray the paint.

Some progress was made on the fuselage construction and the F-1206A bulkhead that was previously Clecoed in place was riveted onto the F-1222 and F-1223 baggage ribs using mostly solid AN470AD4-4.5 rivets. 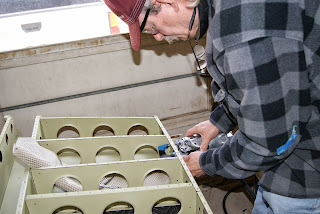 Riveting the F-1206A bulkhead onto the baggage ribs with the pneumatic squeezer using AN470AD4-4 rivets in place of LP4-3 pop rivets. 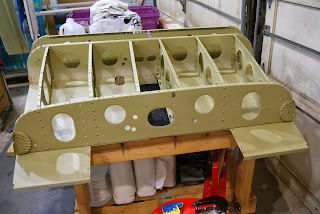 The short F-1206G-L&R ribs were also riveted in place unfortunately access was not good for squeezing solid rivets into them so they were riveted in place using LP4-3 pop rivets. The clearances were tight, so here again the rivet mandrels were slightly bent and the AEX wedge was used to set the rivets. 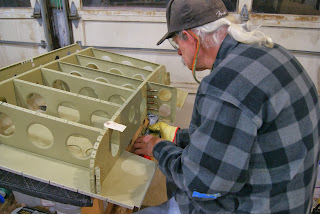 Riveting one of the F-1206G ribs in place using the AEX wedge and a hand rivet puller. 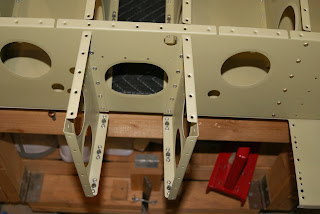 I’m almost embarrassed to admit just how much time was wasted trying to figure out a way to rivet the F-1206D bearing bracket assemblies onto the F-1206G ribs using solid rivets. I tried every yoke and squeezer combination and I just did not feel comfortable attempting the task. One or two of the seven rivets could probably have been done with ease but the others all offered unique challenges and the rivets would have been long and for those especially the squeezer needs to be on them as straight as possible. In the end, I felt the risk reward was too great because access to drill out one of the rivets should something go wrong was not good ... so ultimately used LP4-5 pop rivets per the plans to attach the assemblies. 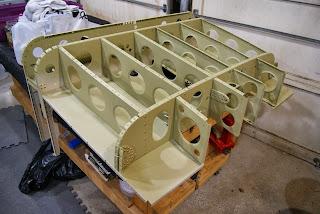